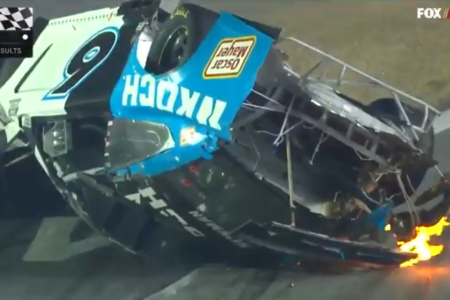 NASCAR star Ryan Newman is in a serious condition, but with non-life threatening injuries after a spectacular crash on the final lap of today’s postponed Daytona 500 in Florida.

Newman was leading the race with only a few hundred metres to run when Ryan Blaney locked bumpers with him and sent him into the outside wall.

The car flipped into the air and was then T-boned at the driver’s door in frightening fashion by Corey LaJoie.

The impact sent the car even higher in the air before it landed on its roof and skid across the finish line upside down in ninth place.

Newman was removed from the car, which was on fire for a short time, and transported directly to hospital.

The Roush Fenway statement reads:
“Ryan Newman is being treated at Halifax Medical Center. He is in serious condition, but doctors have indicated his injuries are not life threatening.

“We appreciate your thoughts and prayers and ask that you respect the privacy of Ryan and his family during this time. We appreciate your patience and cooperation and we will provide more information as it becomes available.”

Denny Hamlin won his second consecutive Daytona 500 in a photo finish with Blaney after the race was postponed due to rain yesterday.

Hamlin passed Blaney as the Newman wreck broke out behind them and the finish was the second closest in the history of the race.

Jimmie Johnson retired after an accident on lap 184 of the 209-lap event in what is the first major race of his farewell season.