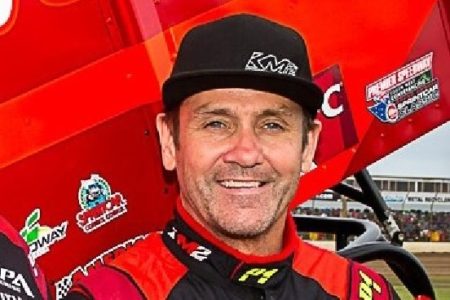 Kerry Madsen has taken a crucial victory over James McFadden by surviving a last-corner attack from the World Series Sprintcars points leader in Bunbury.

Having achieved a drought-breaking win a night earlier in Esperance, Madsen further closed the gap at the top of the standings to 26 points with just two rounds remaining.

McFadden was only 12th in qualifying in Round 12 and while the Monte Motorsport driver claimed two heat wins, he could not get past the Top 8 Shootout and therefore had to start the main from Row 4.

Madsen, on the other hand, put his Krikke Motorsport entry on pole and quickly established a solid lead in the 30-lapper as Jason Kendrick and Brooke Tatnell battled for second.

David Murcott and McFadden had started alongside each other before advancing to fourth and fifth respectively when a Caution was called on Lap 10 due to a minor incident between Glen Sutherland and Andrew Priolo.

Tatnell edged ahead of Madsen at the restart but lacked the momentum to keep the lead, while McFadden drove between Kendrick and Murcott to put himself in a podium position.

Matthew Cross and Sutherland each triggered another Caution before contact between Kris Coyle and Priolo put the latter violently into the Turn 1 catch fencing.

The Open Red which resulted afforded crews the chance to make set-up adjustments as cars sat on the front straight, although it would turn out that Madsen’s #W2 was left largely untouched.

He re-established a healthy lead when action resumed half an hour later as Tatnell came under pressure from McFadden.

Lucas Wolfe displaced Murcott and Kendrick in quick succession to move into fourth position, then Rusty Hickman rode a right rear, which caused him to roll and hit the wall with 10 laps to go.

Tatnell could hold off McFadden no longer after the restart and was also passed by Wolfe.

The latter nearly wrested second spot from McFadden but the series leader held strong and set after Madsen in the closing stages.

McFadden got close, sweeping around the outside at the final corner, but came up short at a margin of 0.741s at the chequered flag.

“I just had to be patient,” said Madsen.

“I was watching the board and caught the lappers with three to go and it was tense.

“James had a dabble on that last corner but I’d made my mind up to not get caught up and open up the bottom. I’ve lost a race here before doing that.”

Tatnell is mathematically a chance of the title but realistically the battle is between McFadden and Madsen ahead of the final two rounds at the Perth Motorplex next Friday and Saturday night (February 21 and 22).