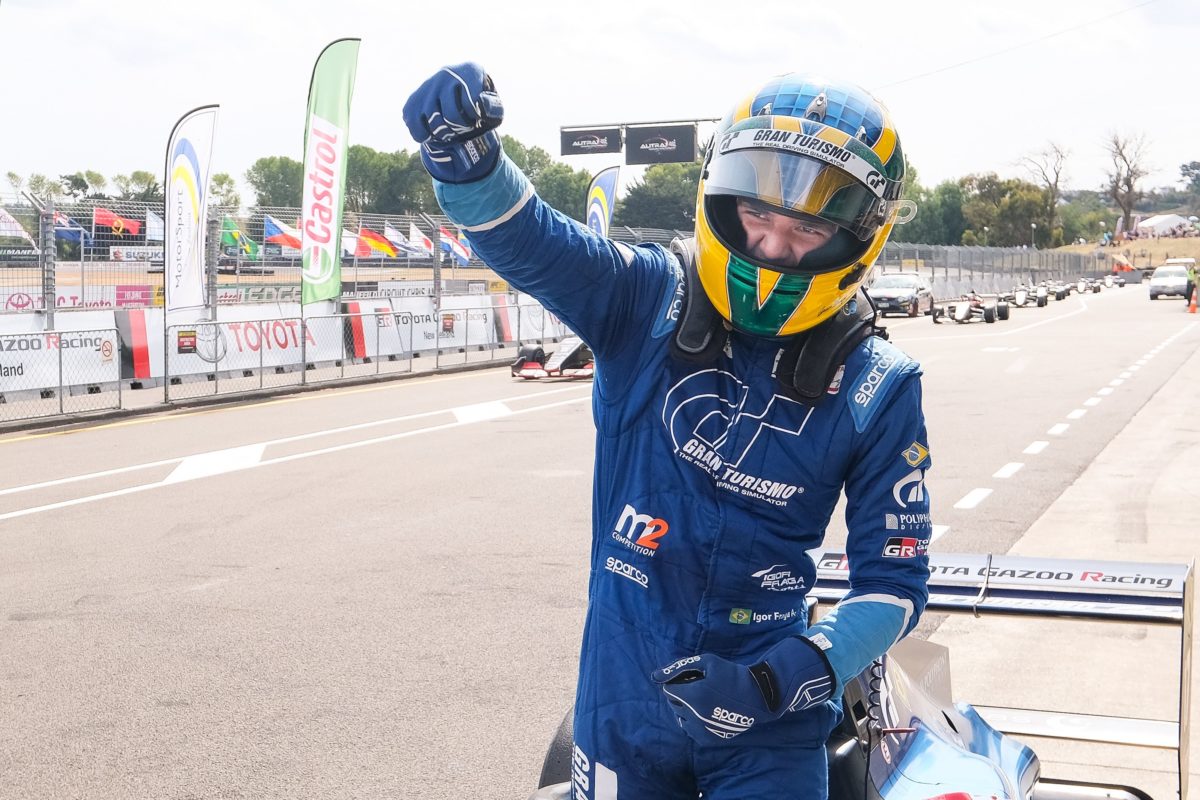 Igor Fraga of Brazil does the double in New Zealand pic: Bruce Jenkins

Fraga led from lights-to-flag in a dominant display to claim his first major international single-seater title outside of South America.

The young gun born in Japan but raised in Brazil was supported by father Fabrizio and ex-Formula 1 driver Roberto Moreno.

“I’m speechless, I just can’t believe it,” Fraga said after the race.

“I would like to thank everyone that has supported me, obviously my parents – it’s been a long way to get here. I have had the support of many people – I’m just so thankful to all of them.”

After the morning’s qualifying session it was Fraga on pole with Renault Sport Academy driver Caio Collet alongside in second. Third was points leader Liam Lawson.

It was an even start between the Brazilian duo, but the inside line for Fraga gave him the advantage and with it the lead.

Fraga was quick to stretch his legs and leave Collet to fend off Lawson. A strong run out of the high banked Higgins turn allowed Lawson to get alongside, but Collet was resilient in defence.

Come Lap 2, Collet and Lawson went side-by-side for several corners, getting into the grey and often getting loose. While that was happening, Fraga surged ahead.

Drama struck on the second lap when Henning Enqvist of Norway crashed out at Higgins. Meanwhile, as the field crossed the line to start Lap 3, Lawson lunged to the inside of Collet and got the pass done. Just moments later the Safety Car was deployed.

The race restarted with 30 laps to go, Fraga out in front with Lawson, Collet, Petr Ptacek and Franco Colapinto in arrears. Lawson was quick to attack, but a pass wasn’t forthcoming.

Rui Andrade of Angola was next to fall victim to the central North Island circuit. He went off at Higgins with what appeared to be right rear suspension damage. As a result, he came to the pit lane and retired.

The second Safety Car was deployed on Lap 13 when Frenchman Emilien Denner went off at Turn 1. His car was quickly recovered and the race restarted, but it wasn’t long before the Safety Car was back out when Tijmen van der Helm beached himself at Turn 1.

Lawson tried to lunge Fraga on the restart on Lap 20, but no passing opportunity was forthcoming.

In the subsequent laps, Lawson began to lose ground to Fraga. So much so that Colapinto caught the Kiwi and swept through at the final corner with six laps to go.

It was later revealed Lawson hit the limiter, which allowed Collet through. From there, Lawson couldn’t get the place back.

Out the front, Fraga was untouchable. The Brazilian streaked ahead to claim a three-second win and with it the dual titles.

For Lawson it was a bitter pill to swallow having led the lion’s share of the championship to date.

“I tried everything,” he said.

“We had a really good car in qualifying this morning, but it was my mistake that I didn’t put it on pole – that was down to me.

Fraga will now head to Europe to contest the FIA Formula 3 Championship with Charouz Racing System.

Lawson is another to race in the top flight Formula 3 field. His second season sees him move from MP Motorsport to Hitech Grand Prix.

Meanwhile, Lirim Zendeli joins Trident after a season at Charouz Racing System, then known as the Sauber Junior Team.

Yuki Tsunoda make the step up to the FIA Formula 2 Championship with Carlin. He finished fourth in the Castrol Toyota Racing Series this year.