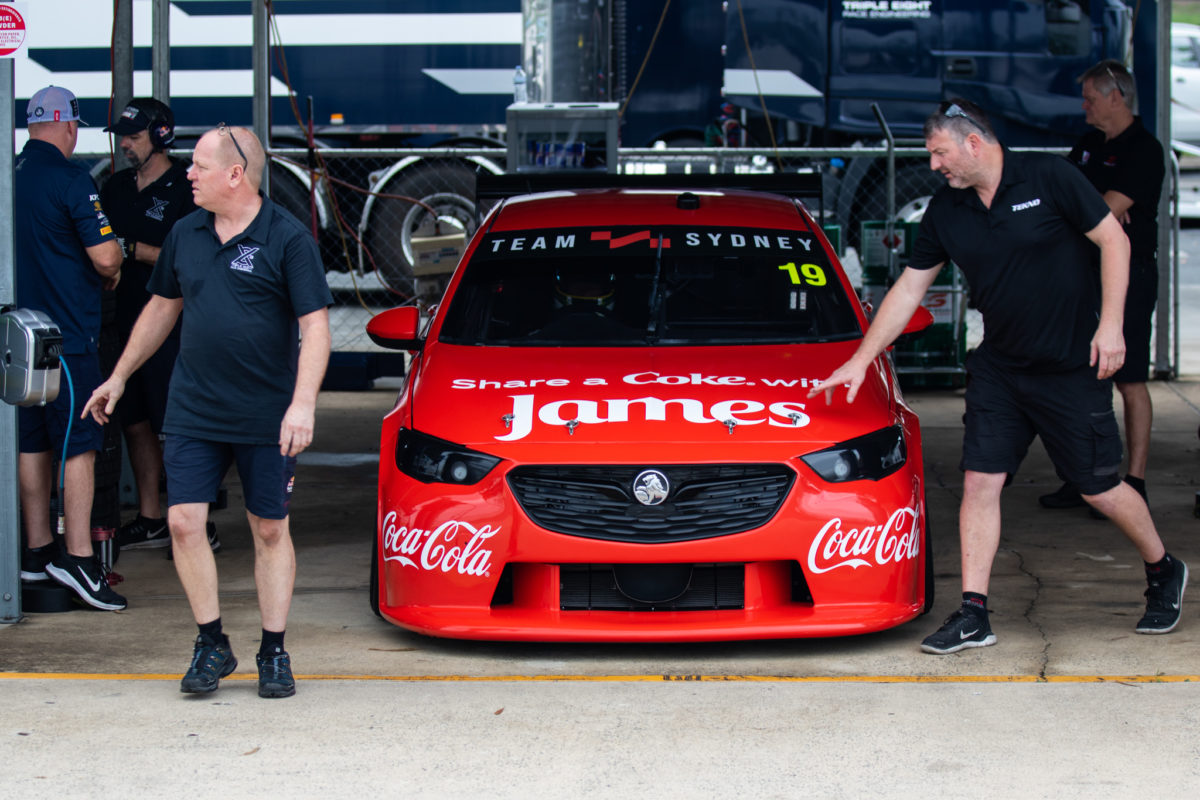 James Courtney completed a handful of laps in the Coca-Cola backed Holden Commodore ZB built by the Brisbane-based team.

The car hasn’t raced competitively since being in the hands of Lee Holdsworth for the 2018 season with Team 18.

It’s the first time Team Sydney has officially hit the track since the formation of the team was announced midway through 2019.

The team has two cars in their current Gold Coast stable with the driver of #22 car yet to be revealed. Chris Pither has been linked to the seat.

Defined in the regulations, a Demonstration Day is ‘an activity related to demonstrating the performance of a Car for the express purpose of selling that Car wherein the potential purchaser is permitted to drive the Car’.

Courtney was joined by one other member of the Team Sydney operation – supported by Triple Eight Race Engineering, which was onsite to shakedown Shane van Gisbergen’s new car after his last chassis went to Team 18 for 2020.

Speaking with Speedcafe.com, Mark Dutton said the outing gave the team a chance to check all the systems.

“You’re allowed to do a Demonstration Day when someone is buying a car,” he said.

“Because they’re buying a car off us, this is the day that effectively when you’re buying any car you can go for a test drive.

“That’s quite smart, not just for the people in the category, but you can imagine if someone was trying to come into the category then they need to know they’re not buying a dud.

“We’ve had a couple of (Team Sydney) guys in the shop help prep the car. We always like to do that when we’re selling a car as much as you can.

“It is still good to run through the car prep with them and do a setup with the guys and a proper handover.”

Dutton confirmed the changeover went smoothly and confirmed Courtney was “happy” with the car after his first few laps.

“When you’ve got a driver coming from another team, although they’re both a Commodore, it’s not a Triple Eight car that he’s been driving.

“He had some really interesting feedback. Everything that you would expect to hear, but it’s still good to hear it. He seems pretty excited about it as well.”

The season officially gets underway with the BP Ultimate SuperTest at The Bend Motorsport on February 18 before the Superloop Adelaide 500 over February 20-23.

Next Story McLaughlin: IndyCar test no distraction from Supercars

Previous Story Waters gets a green grille in tweaked livery