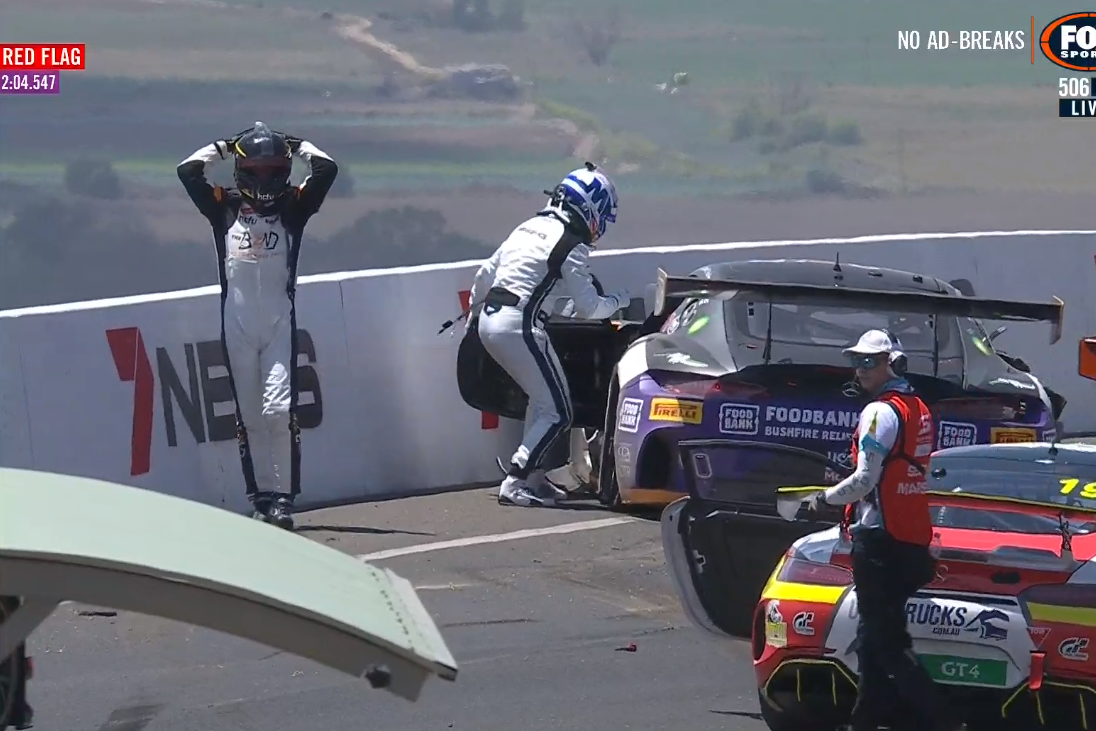 Sam Shahin (hands on head) in the moments after the crash pic: Fox Sports

Gentleman racer Sam Shahin has recounted his “ferocious” Bathurst 12 Hour crash and explained how it could easily have been even “more disastrous” than the major injuries he did incur.

Shahin was qualifying for the race when his Triple Eight-run Mercedes-AMG was nudged by Cameron McConville.

The contact saw Shahin spear into the exposed concrete wall on the approach to Brock’s Skyline, before his car was hit again at high speed by the Tyler Everingham-driven MARC II V8.

Despite the impact, Shahin was able to extract himself from the cockpit with help from Dirk Müller, who had stopped on track to attend to the driver of the stricken Mercedes-AMG.

In the days following the incident, Shahin revealed he had suffered two crushed vertebrae as well as a broken finger and broken ribs.

Speaking with Speedcafe.com, Shahin said he knew he was injured from the moment the car came to halt and is lucky not to be worse off after he tried unsuccessfully to unbelt himself.

“We were only a lap or so in after a red flag into what was essentially a practice session,” recounted Shahin.

“Every competitor was on a compromised lap by that stage. I let as many cars as I safely could up Mountain Straight, then more impatient folk between the Cutting and McPhillamy (Park).

“But given (McConville’s) eagerness to pass, I tried to stay right and slowed down to let him through at the only possible safe spot, on driver’s left before Skyline. The rest is history.

“I perhaps should have stayed ‘on’ my lap and yielded as I had originally planned down Conrod Straight.

“The impact was ferocious with very little time to brace. I held on for dear life and the bent steering wheel is testament to the grip level exerted.

“I knew I was seriously injured straight away. The piercing pain in my back was exceptional.

“I am not entirely certain what occurred in the moments immediately after the first impact as I bounced back and became stationary mid-track.

“I tried to unbuckle myself but was unable to. I reached for the radio to ask David Cauchi (engineer) to call for an ambulance when I unexpectedly received the second hit.

“That was a huge hit and totally shook me about in the cabin.

“The second impact would have been more disastrous if I had been able to unbuckle myself moments earlier or I had become stationary facing the other way.

“I have sustained breaks to two vertebrae, a neck injury, broken ribs and a couple of fingers along with some bits and pieces. A high price to pay.”

Nasty accident last week. Two crushed vertebrae, a neck injury, a broken rib and fingers. Long road to recovery from here. We take so much for granted. Thank you to all the well wishers. The support is greatly appreciated. https://t.co/2rseiu9OaB

Speedcafe.com can also confirm that McConville, who was driving the Wall Racing-run Lamborghini Huracan, was cleared of wrongdoing despite expressing his regret for the outcome of the touch.

A Motorsport Australia spokesperson has advised Speedcafe.com that Driving Standards Advisor Craig Baird reviewed the incident and determined that it did not warrant referral to the stewards. Shahin himself told Speedcafe.com, “I do not begrudge Cam McConville.

“He is a terrific gentleman that I’ve called a friend for a long time. I only wish he’d been more patient to get by.”

McConville said that Shahin has braked unexpectedly, a claim consistent with incar footage which was subsequently broadcast.

“Look, I feel sorry for Sam, he’s a great guy, honestly did not mean to touch him,” stated McConville, shortly after the incident.

“I went to go under at the Grate, I had my flashers on and he turned across. I got out, didn’t want to make contact.

“Then we came out of Skyline and as I went to pull left to pass him he just hit the brakes. I thought I thought ‘Why are you brake testing me there?’ but I went to go right, he went right, so as I’ve pulled left he’s just touched the brakes and unfortunately just collected the back of him.

“Absolutely feel terrible for those guys.”

Everingham’s part in the crash was even more spectacular, striking the Triple Eight Mercedes-AMG and then making heavy contact with the wall at The Esses, but he escaped with just a sore leg according to his team boss, Ryan McLeod.

Shahin had been set to race alongside younger brother Yasser, Supercars regular Anton De Pasquale, and sportscar specialist Nick Foster, but the car was withdrawn due to the extensive damage.

Shahin is the owner of South Australian circuits Mallala Motorsport Park and The Bend Motorsport Park. The accomplished businessman is a regular of Porsche Carrera Cup Australia and the local GT ranks.

Next Story VIDEO: A look back at Team Castrol's Bathurst 12Hr weekend