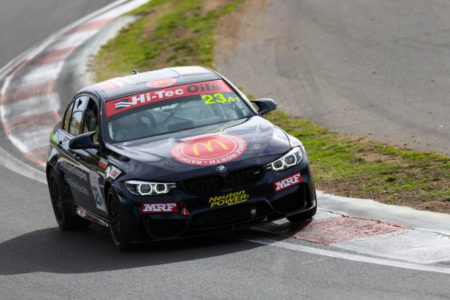 Lynton/Leahey are set to race the same BMW M3 Competition in which they took a dominant victory last Easter at a record 131 laps completed.

That car has had a ‘birthday’ and the Lynton team will campaign an identical, brand-new M3 for experienced production car racers Rob Rubis, Scott Turner and Shane Smollen.

They will race in the new Class X for ‘Ultimate Performance’ cars, to which a number of models formerly slotted into Class A1 (Extreme Performance Forced Induction) have been moved for this year’s Bathurst 6 Hour.

“We’re good to go and while there’s less pressure this year, we’re coming back to ‘back to back’ it,” declared Lynton.

“That’s the goal. The car is the same, the drivers are good, and all of the crew are coming back so all the pieces are in place.

“We’ve gone over the car, it’s had a birthday, but it hasn’t run much since the race last year – just a few APC rounds which we won.

“The regulations say we can run the same boost levels as 2019, and we have to make six stops instead of five because we’re in class X now.

“We don’t need the extra stop but it’s what we’ve got and we’ll work our strategy around it.

“We’re also running a second car out of our garage which is really exciting. We had a second M3 sitting there so we decided to build it up and Scott, Rob and Shane will drive it really well.

“Shane is experienced in driving properly fast cars while the M3 will be a bit of a step up for Rob and Scott, but we’ll get plenty of laps into them before Bathurst and they’ll be up to speed.

“Everything we’ve learned from the blue car will go into the new one and we’re really looking forward to the race with two cars and a great team.”

Both cars and all drivers are set to test at Queensland Raceway next week, and it is expected that both cars will run in Round 1 of the Australian Production Car Championship at Sydney Motorsport Park in late March.

According to organisers, this year’s Bathurst 6 Hour entry list is less than five cars away from reaching capacity.

The 2020 event will be the first held under Australian Racing Group management, and forms part of the Shannons Motorsport Australia Championships calendar.

It will be broadcast live on the Seven Network over Easter (April 10-12), with Supercars Media announced as the production company today.