Shahin transferred to Adelaide for treatment after qualifying crash

Shahin transferred to Adelaide for treatment after qualifying crash 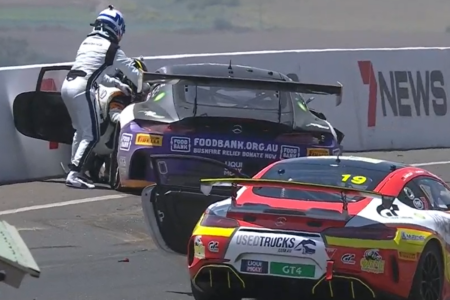 Shahin being helped from the car pic: Fox Sports

Sam Shahin has been transferred back to his native Adelaide for further treatment on a back injury following his heavy qualifying crash at the Liqui-Moly Bathurst 12 Hour.

He was then collected by Tyler Everingham who was unsighted in the Scandia-backed MARC II entry as he approached the incident, tagging the stricken Mercedes-AMG before himself making heavy contact with the wall.

Both drivers were initially taken to the circuit medical centre before being transferred offsite for further checks.

In the case of Shahin, that’s seen him head back to Adelaide.

“After being looked after initially by the excellent on-track medical team and then Bathurst hospital, Sam was transferred to Adelaide for further treatment for a back injury,” a team spokesperson confirmed to Speedcafe.com.

Everingham meanwhile was cleared of any injury after reporting a sore leg following the incident.

“Tyler’s fine. He hurt his leg a little bit, but otherwise fine – it’s not broken or anything,” team boss Ryan McLeod confirmed to Speedcafe.com.

“He came around to where we were staying for dinner last night, obviously a bit disappointed, or a lot disappointed – we all are.

“We would have loved to have both cars out there but in the end it’s a tough joint.”

Triple Eight’s sister car reached the Top 10 Shootout after resolving an anti-roll bar issue in qualifying, while the second of McLeod’s MARC II entries will start from the Invitational class pole.