Mixed fortunes for Bentley with three hours to go at Bathurst 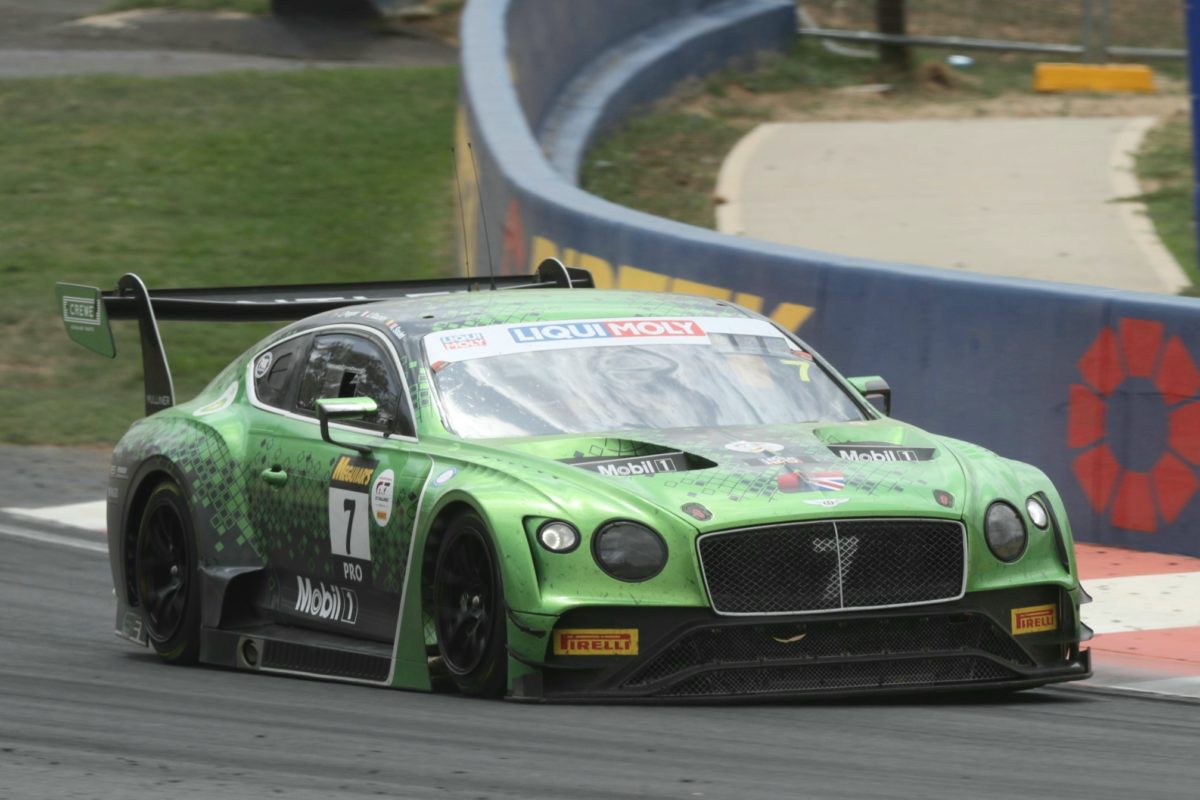 The #7 Bentley Continental continues to lead the Liqui-Moly Bathurst 12 Hour but the sister #8 car fell off the lead lap with just over three hours remaining.

Oliver Jaris was not nine laps into his stint when he spun exiting The Dipper on Lap 226, possibly due to a puncture on the left-rear of the second Bentley.

Jarvis somehow managed to stay off the walls despite spinning nearly 540 degrees but could not flick spin Car #8 and a Safety Car was called with eight hours and 47 minutes on the clock.

There are eight cars left on the lead lap, all on essentially the same strategy, with Maxime Soulet in the lead in the #7 Bentley Team M-Sport entry.

The Safety Car has just peeled off with 542 minutes of the race elapsed, but Car #8 is in the paddock and now more than five laps down.

Soulet was also at the wheel in first position in the #7 Bentley at the start of the seventh hour from Ben Barnicoat in the #60 McLaren.

Shane van Gisbergen was more than 50 seconds away from the race lead when he descended into pit lane in the #888 Mercedes-AMG and Jamie Whincup was sent back out in 10th position at a lap down.

Soulet was up by almost 21 seconds when he pitted on Lap 167, meaning Barnicoat took over the race lead just as he set the #7 Continental’s fastest lap of the race at a 2:04.4986s.

Thomas Preining put the #912 Absolute Porsche into fifth position when he passed Craig Lowndes, who was behind the wheel of the #1 Earl Bamber Motorsport Porsche, at The Chase on Lap 167.

Meanwhile, Car #7 only dropped one position by the time Jules Gounon had re-entered the race track, with a deficit of a bit over 50 seconds to Barnicoat after his out lap.

Lowndes pitted from sixth on Lap 168 and the #1 Porsche was pushed into the shed in order to replace the brake rotors after that car had been suffering from a long pedal, and Laurens Vanthoor resumed almost three laps down.

Barnicoat pitted on Lap 171 and Tom Blomqvist rejoined in fourth position in the #60 McLaren, behind leader Gounon, Felipe Fraga in the #999 Mercedes-AMG, and Buurman in the #77 Mercedes-AMG.

The #18 Nissan which had last pitted from fifth was still stuck a lap down, in 10th position, but just behind the race-leading Bentley on the road.

Joao Paulo de Oliveira continued to shadow Gounon, while spots of rain were seen on windscreens with around six hours and 45 minutes of the race elapsed.

The #911 Porsche was, however, on the lead lap at that point in ninth position until Mathieu Jaminet followed Preining, in the sister #912 Porsche, into the pits.

Fraga pitted from second position on Lap 177 and rejoined in sixth position.

A green flag period of more than four hours ended when Dennis Lind stopped next to the circuit due to a fuel pump failure for the #63 Orange1 FFF Lamborghini which had been running fourth, one spot ahead of Whincup.

De Oliveira was seventh and still a lap down at the time and while he followed Gounon into pit lane, KCMG was able to tend to the #18 Nissan and send the Brazilian back out ahead of the #7 Bentley.

The Safety Car had a wider homogenising effect, with two other cars getting back onto the lead lap and the top nine brought together on strategy.

The #7 Bentley retained the lead with Jordan Pepper behind the wheel from Luca Stolz in the #77 Mercedes-AMG, Blomqvist in the #60 Lamborghini, van Gisbergen in the #888 Mercedes-AMG, de Oliveira in the #18 Nissan, Sebastian Morris in the #8 Bentley, Matt Campbell in the #911 Porsche, and Matteo Cairoli in the #912 Porsche.

Buhk was last of those on the lead lap in ninth position in the #999 after GruppeM opted to pit a second time under Safety Car to top up and take Fraga out of the car, while Michele Beretta was 10th in the #46 Black Falcon Mercedes-AMG.

Laurens Vanthoor was a lap down in 13th position in the #1 Porsche.

The fourth restart of the race came in the 453rd minute on Lap 193, when Pepper took a 2.0s lead across the stripe with four lapped cars protecting him from the Craft-Bamboo Mercedes-AMG.

Van Gisbergen held off de Oliveira at Griffins Bend just up the road, while Pepper extended his lead past five seconds in just that one lap.

Even once he had cleared the traffic which might have held him up, Stolz could not keep pace with Pepper, who cleared out to a 10-second advantage on Lap 204.

Blomqvist pitted from third and Campbell from eight on Lap 214, but the former exited behind due to a 30-second penalty for pit lane speeding hanging over the #60 McLaren which it was unable to serve under the last Safety Car, as per regulations.

De Oliveira and then Morris pitted from fourth on Laps 216 and 217, before Pepper stopped in the lead Bentley on Lap 221 with a 21.0s lead at that point.

While the South African had superior pace to Stolz, his cause was helped by Stolz being held up by Pilet, who had just taken over the #911 Porsche.

Van Gisbergen had almost caught Stolz when the #77 Mercedes-AMG came into the pits on Lap 224, and the Kiwi handed the #888 Mercedes-AMG over to Gotz a lap later.

The German got out ahead of Buurman, who had taken over Car #77, before Buhk gave up the lead on Lap 226 and Cairoli followed him into the lane in the #912 Porsche.

The Safety Car was called moments later for the Jarvis incident.

Previous Story Bentley in front at halfway in Bathurst 12 Hour