Fraga leads for GruppeM after first quarter of Bathurst 12Hr

Fraga leads for GruppeM after first quarter of Bathurst 12Hr 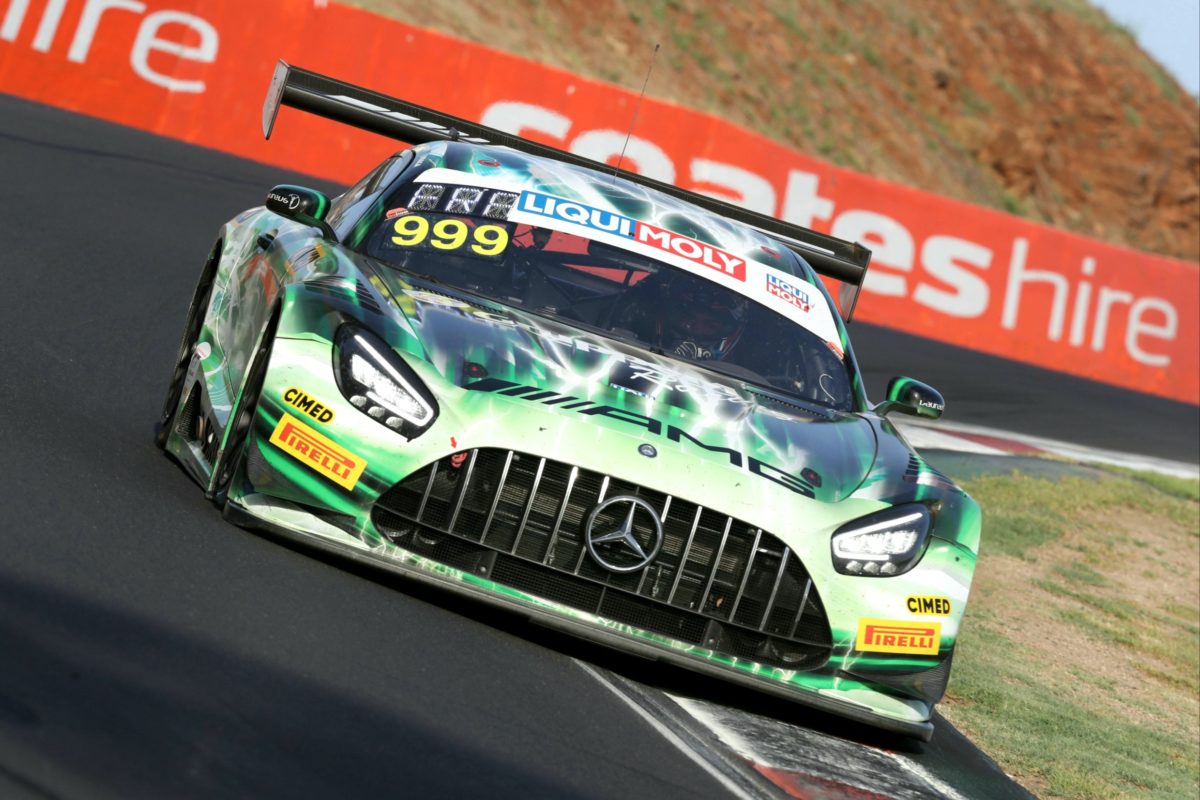 Felipe Fraga leads in the GruppeM Mercedes-AMG after the first three hours of the 2020 Liqui-Moly Bathurst 12 Hour.

Fraga cycled back to the head of the order during the third Safety Car period, necessitated by a nasty crash for Garth Tander at McPhillamy Park, with Yelmer Buurman in another Mercedes-AMG handed over second spot by Black Falcon team-mate Sergei Afanasiev at the restart just moments ago.

Alvaro Parente has just taken third position in the 59Racing McLaren which led for much of the opening stint.

It was three-wide at the front for race start, and GruppeM’s Maximilian Buhk was still running alongside Absolute Racing’s Patrick Pilet when they arrived at Griffins Bend.

Buhk finally seized the lead courtesy of the inside line in the #999 Mercedes-AMG, with Pilet taking up second in the #911 Porsche and Ben Barnicoat, the other party in the three-wide, holding third in the #60 59Racing McLaren.

Barnicoat put a move on Pilet late on Lap 2 and KCMG’s Alexandre Imperatori (#18 Nissan) took third from the McLaren at Hell Corner on the next lap.

The first official lead change came at The Chase on Lap 8 when Barnicoat made a late move and light contact with the rear of the GruppeM Mercedes-AMG.

The Briton used the clear track to set the first ‘four’ of the race on the following lap, and the second on Lap 10, at which time his lead was already out to 1.5s.

Luca Stolz (#77 Craft-Bamboo Black Falcon Mercedes-AMG) took fifth from Craig Lowndes at the start of Lap 11, before the latter dropped four more spots on Lap 13 when the #1 Earl Bamber Motorsport Porsche squirmed at The Chase and he ran through the grass.

Chaz Mostert also put the #34 Walkenhorst BMW past Car #1, late on Lap 16, before Barnicoat’s lead edged over four seconds for the first time on Lap 19 with around 45 minutes elapsed.

As the race moved past the one-hour mark, Barnicoat led in the #60 McLaren from Buhk and Imperatori, then a gap of around four seconds to the pack of Pilet (#911 Porsche), Stolz (#77 Mercedes-AMG), Maximilian Gotz in the #888 Triple Eight Mercedes-AMG, Jordan Pepper in the #7 M-Sport Bentley, and Marco Mapelli in the #63 Orange1 FFF Lamborghini.

Markus Winkelhock was ninth in the #222 Valvoline Audi with Mostert (#34 BMW) close behind as he had been for several laps prior.

Imperatori, Winkelhock, and Mostert were the first Pro class competitors to pit, on Lap 32, with several more including the top two of Barnicoat and Buhk doing so on the following lap.

That left Barnicoat in the #60 McLaren up by 2.0s on Buhk in the #999 Mercedes-AMG after 4.6s had separated them on the way into the pits and little more than a second on the way out.

That was made redundant just minutes later when Come Ledogar made a hash of The Esses and smashed the #188 Garage 59 Aston Martin into the wall, drawing the Safety Car on Lap 39.

Gotz was third in the #888 Mercedes-AMG having made ground through the pit cycle, from Mathieu Jaminet in the #911 Porsche, Maxime Soulet in the #7 Bentley, Stolz in the #77 Mercedes-AMG, Andrea Caldarelli in the #63 Lamborghini, Imperatori in the #18 Nissan, and Lowndes in the #1 Porsche.

Walkenhorst used the opportunity to bring the #34 BMW back into the pits and Nicky Catsburg was able to take over from Mostert without losing 10th position.

The race restarted on Lap 43, in the 101st minute, but a second Safety Car was called on Lap 46 due to Jules Westwood crashing the #6 Wall Lamborghini at The Dipper.

Barnicoat ceded the lead when he pitted and handed the lead 59Racing McLaren over to Parente.

He was followed into the pits by Catsburg for the third stop for the BMW, and GruppeM responded by calling Buhk in and installing Fraga in the #999 Mercedes-AMG.

Under Safety Car, Gotz led in the #888 Mercedes-AMG from Jaminet in the #911 Porsche, Soulet in the #7 Bentley, Stolz in the #77 Mercedes-AMG, Caldarelli in the #63 Lamborghini, Lowndes in the #1 Porsche, Mattia Drudi in the #222 Audi, Tander in the #22 Valvoline Audi, and Thomas Preining in the #912 Porsche.

Catsburg was 16th, Parente 17th, Fraga 20th, and the #30 Honda Racing JAS entry off the lead lap with a misfire.

The second restart came on Lap 49, just before the two-hour mark, and Gotz moved his lead to two seconds in the space of three laps, while Imperatori passed Lowndes on Lap 51 then got Caldarelli on the outside as they braked for Griffins on Lap 52.

Imperatori was also quick and was able to Stolz, who found himself stuck behind third placed Jaminet, and the Nissan driver rounded up the #77 Mercedes-AMG while braking for Griffins on Lap 60.

Gotz pitted and Jamie Whincup hopped into the #888 Mercedes-AMG for the first time at the end of Lap 61, but most of the rest of the field was into the lane a lap later due to an unfortunate, high-speed crash for Tander.

The three-time Supercheap Auto Bathurst 1000 winner had been running 11th when Audi Sport Team Valvoline team-mate Dries Vanthoor had a moment in front him in the #2 R8 at McPhillamy Park.

Tander had to stay tight to try and avoid Car #2 but he too lost control and spun out through the gravel where he had a heavy hit with the tyre wall, barely missing the nose of Vanthoor’s car in the process.

Under Safety Car, Fraga led for GruppeM from a similarly off-sequence Afanasiev in the #46 Black Falcon Mercedes-AMG after their stops 15 laps prior to the Safety Car.

Yelmer Buurman was third in the #77 Mercedes-AMG, ahead of Parente in the #60 McLaren and Jules Gounon in the #7 Bentley.

Sixth through 11th was pole man Matt Campbell in the #911 Porsche, Catsburg in the #34 BMW, Whincup, Matteo Cairoli in the #912 Porsche, Caldarelli in the #63 Lamborghini, and Laurens Vanthoor in the #1 Porsche.

Oliver Jarvis was 12th in the #8 M-Sport Bentley which was repaired after his crash, due to a brake issue, in final practice.

The race restarted again in the last minute of Hour 3.