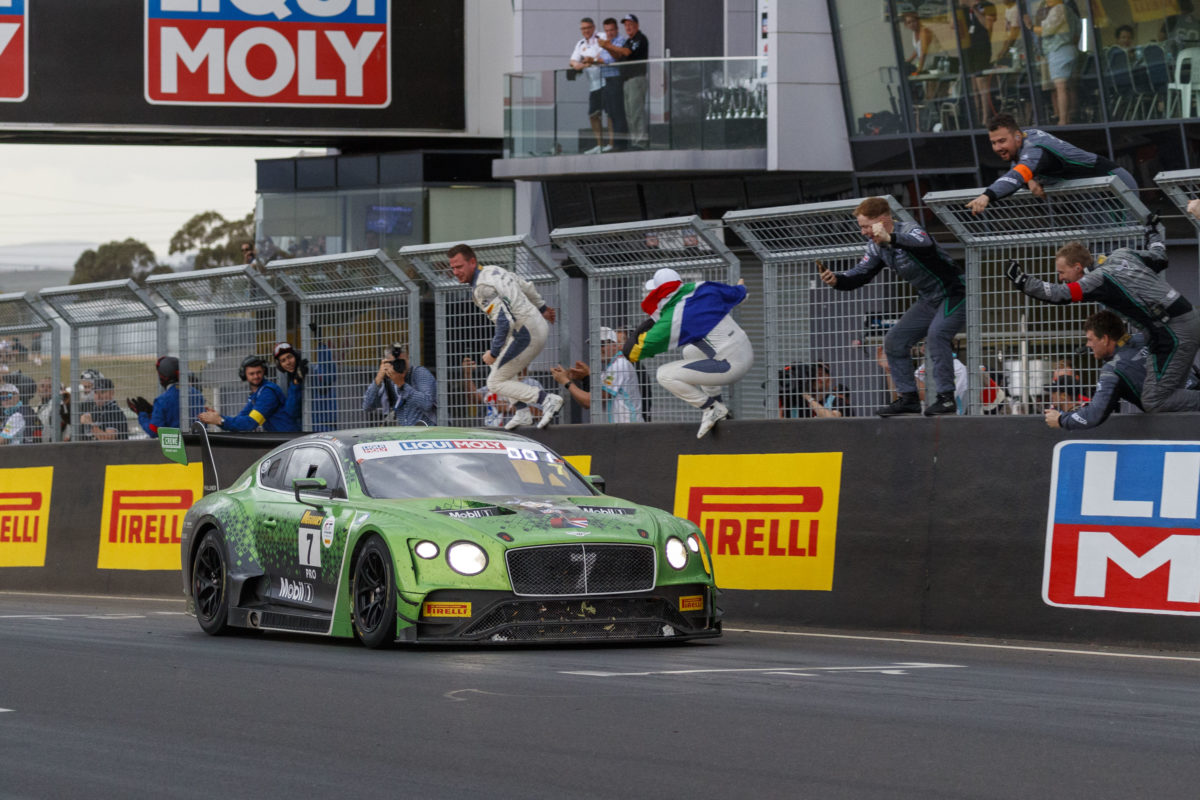 Bentley Team M-Sport has taken a comprehensive victory in the 2020 Liqui-Moly Bathurst 12 Hour courtesy of Jules Gounon, Jordan Pepper, and Maxime Soulet in the #7 Continental GT3.

The lead Bentley jumped up the order with a short-fill earlier in the day but it was raw car speed that saw it stay up the front, and Gounon had the honours of taking the chequered flag 37.7945ss ahead of the rest of the field.

GruppeM Racing provisionally took second position after Raffaele Marciello passed Tom Blomqvist at Murray’s Corner on what was the penultimate of 314 laps completed, but the #999 Mercedes-AMG GT3 faces an investigation for a potential infringement at its final pit stop.

For now, Marciello shares the runner-up position with Maximilian Buhk and Felipe Fraga, while third is with 59Racing’s Blomqvist/Ben Barnicoat/Alvaro Parente.

Campbell’s fifth with Mathieu Jaminet and Patrick Pilet in the #911 Porsche 911 GT3 R was something of a fightback for the Absolute Racing entry which dropped off the lead lap at one point due to a puncture and then a 15-second penalty for a breach during the resulting pit stop.

Soulet was leading in the #7 Bentley when the race restarted for a fifth time on Lap 231, just after ticking into the 10th hour.

Gotz was second in the #888 Mercedes-AMG, ahead of Yelmer Buurman in the #77 Craft-Bamboo Black Falcon Mercedes-AMG and Buhk in the #999 Mercedes-AMG.

Gotz, however, was on the same tyres which van Gisbergen had used in the previous stint and Soulet disappeared to a five-second lead in just three laps, while Buurman was harassing the Triple Eight driver.

It was Buhk, however, who passed Buurman up Mountain Straight on Lap 237 and Edoardo Liberati (#18 KCMG Nissan) took advantage of the double tow to follow the GruppeM car past the Craft-Bamboo car.

When Gotz was slow off The Chase on Lap 242, Buhk ranged up on his outside as they braked for Murray’s Corner, where they banged together.

Gotz held the spot but could not stave off Buhk at The Chase two laps later.

He did get second position back when GruppeM called Buhk into the pits on Lap 253, with Marciello resuming in fourth.

Soulet was over 31 seconds clear of Gotz when he guided the Bentley into pit lane, but rejoined in fourth at over 10 seconds behind Marciello given that M-Sport put brand-new rubber on Car #7 but GruppeM did not change tyres at all.

Gotz’ struggles on badly worn tyres continued when he broke into a slide through The Chase on Lap 257, allowing Dirk Werner to go past just before the 10-hour mark and take the lead in the #912 Absolute Porsche.

Triple Eight called Gotz in on Lap 259 and van Gisbergen jumped in for the balance of the day, commending his double stint in seventh position with a set of brand-new tyres.

As Werner pressed on, Barnicoat (#60 McLaren) passed Liberati for fourth at The Chase on Lap 266.

Werner pitted at the end of that lap, bringing an end to the penultimate pit stop cycle.

The #999 Mercedes-AMG with Marciello onboard was about 5.8s up on Gounon in the #7 Bentley, from Barnicoat, Liberati, Maro Engel in the #77 Mercedes-AMG, Thomas Preining in the #912 Porsche, van Gisbergen, and Jaminet in the #911 Porsche.

Engel squirmed past Liberati to move the Craft-Bamboo entry into fourth on Lap 269, before the latter handed over the #18 Nissan to Alexandre Imperatori, who rejoined in eighth, on Lap 278.

Gounon had all but caught up to Marciello on Lap 279, when an hour and 15 minutes remained, but the margin blew back out beyond 2.6s when the Bentley got held up by the Mercedes-AMG GT4 across the top on Lap 282.

Engel pitted from fourth and resumed in sixth without taking fresh tyres on the #77 Mercedes-AMG on Lap 282, before Marciello dropped into the lane from a 0.7s lead on Lap 283, with GruppeM putting new rubber on Car #999.

There was a scare for Bentley on Lap 284 when Gounon suffered a right-rear puncture down Conrod Straight on his in lap.

The Frenchman made it safely into the pits and the crew was forced to put new tyres on the #7 Continental, but he still got out in second position and almost a second ahead of Preining, who had not long started his final stint in the #912 Porsche.

Gounon was also another few seconds ahead of Marciello, who sat fourth given the #999 Mercedes-AMG had to reportedly take on 20 litres more fuel and the GruppeM crew was a little slow on the right-rear tyre change.

Engel hip and shouldered his way past Blomqvist, who had not long stepped into the #60 McLaren, to take fifth at Murray’s Corner on Lap 286.

Marciello then moved into an official third position and effectively second by getting underneath Preining at Hell Corner on Lap 288, in the 665th minute of the race.

Engel was even more aggressive on Lap 292, divebombing Preining at The Esses and forcing the Porsche drive-through the bitumen run-off area as he ceded fourth to the #77 Mercedes-AMG.

Van Gisbergen had inherited the lead with the stops of Gounon and Barnicoat on Lap 284, and was 9.6s ahead of the former when he drove the #888 Mercedes-AMG into the pits on Lap 294.

Triple Eight changed only the right-hand side tyres and sent the New Zealander on his way in sixth position.

Imperatori made an unscheduled pit stop for a brake problem on Lap 299, just past six-and-a-half hours, and the #18 KCMG Nissan fell off the lead lap and out of contention.

Blomqvist passed Preining at The Chase and that became a provisional podium move for the #60 McLaren when Engel had to pit from third for a puncture on the right-rear of the #77 Mercedes-AMG on Lap 301.

Preining was therefore back up to fourth, but he finally had to pit for a splash of fuel in the 703rd minute and dropped to seventh, last of those still on the lead lap, in the #912 Porsche.

Campbell was closing in on van Gisbergen in the battle for fourth inside the final 20 minutes, and it looked as though that could have become a fight for a podium position when Marciello went off with a puncture at The Chase on Lap 309.

The Italian’s right-rear let go in the braking zone and he toured the grass but was able to pit and get back out with the loss of only one position, to the #60 McLaren of Blomqvist which had taken up second position.

The threat of rain held off until as soon as the first few cars took the chequered flag in a distance record-breaking 314-lap race.

Sixth went to the #77 Mercedes-AMG GT3 of Buurman/Engel/Luca Stolz, ahead of the #912 Porsche 911 GT3 R of Matteo Cairoli/Preining/Werner which was the last car on the lead lap, and the Silver class-winning #59 59Racing McLaren 720S GT3 of Dominic Storey/Fraser Ross/Martin Kodric.