Bentley in front at halfway in Bathurst 12 Hour 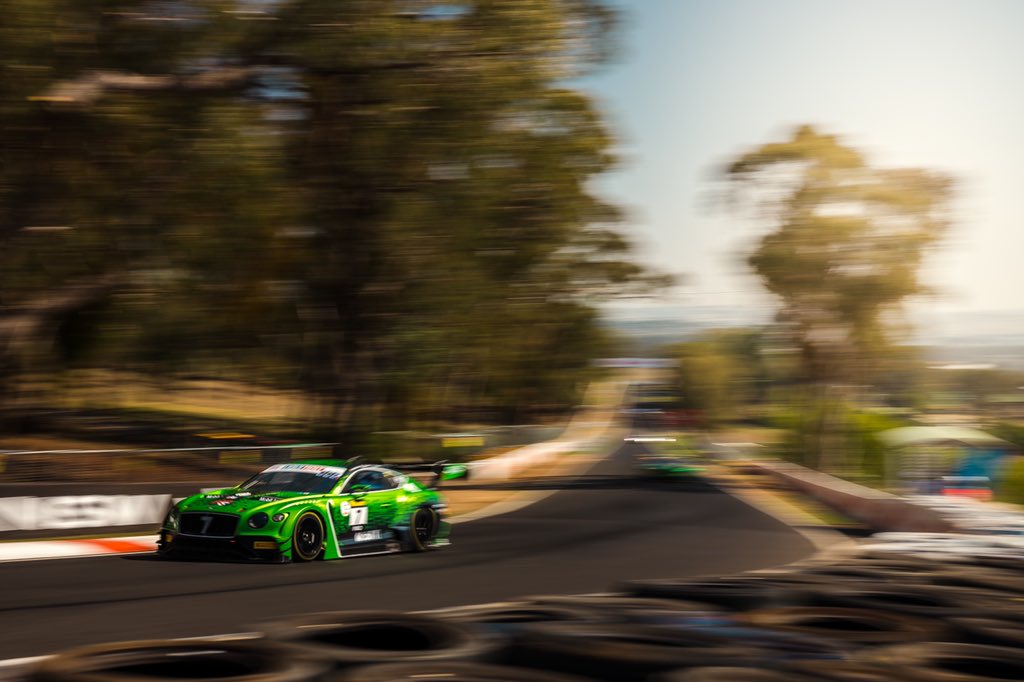 The #7 Continental GT3 moved into the lead by virtue of a shorter fill during the third pit stop cycle and has remained at or near the front since that time.

Maro Engel was second as the seventh hour ticked over but has just pitted in the #77 Craft-Bamboo Black Falcon Mercedes-AMG, with Yelmer Buurman resuming in seventh.

Barnicoat is close to 19 seconds off the lead in the #60 McLaren in second position, ahead of Shane van Gisbergen in the #888 Triple Eight Mercedes-AMG, Edoardo Liberati in the #18 KCMG Nissan, and Andrea Caldarelli in the #63 Orange1 FFF Lamborghini.

Felipe Fraga is sixth in the #999 GruppeM Mercedes-AMG despite that car copping a penalty for a pit stop infringement.

Alex Buncombe holds seventh in the #8 Bentley Team M-Sport entry having just passed Buurman, Craig Lowndes is ninth in the #1 Earl Bamber Motorsport Porsche, and Thomas Preining rounds out the top 10 in the #912 Absolute Porsche.

The #911 Absolute Porsche is a lap down in 12th after picking up a puncture.

Fraga headed the field in the #999 Mercedes-AMG as the race moved from the third hour into its fourth, but was almost half a stint off-sequence relative to the rest of the contenders.

Buurman was given second spot by team-mate Sergei Afanasiev (#46 Black Falcon Mercedes-AMG) upon the third restart of the day in the 180th minute, and the latter quickly ceded more positions.

There was trouble for the #34 Walkenhorst BMW, which reportedly had an earlier run-in with some wildlife, and they dropped a lap when Nicky Catsburg had to pit from seventh on Lap 74 so that the bonnet could be attended to.

Laurens Vanthoor sat 11th in the #1 Porsche under the third Safety Car but was quickly making up track position early in the fourth hour.

The Belgian had just about caught Jamie Whincup, who held seventh in the #888 Mercedes-AMG, on Lap 78, the ninth from the restart, but was shuffled back to 10th in a wild passage at the start of Lap 82.

Vanthoor was in a gaggle of cars which had been bottled up by lapped traffic when he and Joao Paulo de Oliveira went either side of Whincup at Hell Corner.

De Oliveira passed both in the #18 KCMG Nissan, Whincup dropped a spot to eighth, and Matteo Cairoli took up ninth in the #912 Absolute Racing Porsche.

Afanasiev and Buurman pitted soon after, leaving Alvaro Parente second in the #60 McLaren, ahead of Jules Gounon in the #7 Bentley, Matt Campbell in the #911 Porsche, and a distant de Oliveira.

Fraga pitted from a lead of over three seconds on Lap 85 and Raffaele Marciello hopped into the #999 Mercedes-AMG for the first time in 17th position, one ahead of Buurman.

There was a hair-raising moment at Metal Grate on Lap 87 when Whincup made contact with the lapped Marc Cini which spun the #9 Hallmarc Audi.

Cini just brushed the outside wall and was fortunately not collected by the following cars, while Whincup continued in fifth position in #888.

Caldarelli pitted from eighth in the #63 Lamborghini on Lap 90, heralding the start of the third pit stop cycle.

Parente led Gounon by around two seconds when they pitted together from first and second on Lap 99, as did several others.

With traffic having helped to split the top three from the rest, Absolute Racing was able to service both of its Porsches at the end of Lap 101, while Kelvin van der Linde became the first driver to dip into the 2:03s in the #222 Valvoline Audi on Lap 100.

By the time the third cycle was done, Jordan Pepper led in the short-filled #7 Bentley which he had taken over from Gounon, Marciello was close behind in the #999 Mercedes-AMG which was still off-sequence, and Buurman was third after a short third stint in the #77 Mercedes-AMG.

Tom Blomqvist was more than 20 seconds further back in the #60 McLaren, followed by Patrick Pilet in the #911 Porsche, Whincup in the #888 Mercedes-AMG, Markus Winkelhock in the #222 Audi, Liberati in the #18 Nissan, Dennis Lind in the #63 Lamborghini, Silver class leader Michele Beretta in the #46 Mercedes-AMG, and Earl Bamber in 11th spot in the #1 Porsche.

Marciello put GruppeM back in first position when he made a textbook move on Pepper at The Chase on Lap 113, halfway through the fifth hour.

The Italian was 1.5s to the good by the end of the following lap, at which point Buurman was 9.7s off the lead in the #77 Mercedes-AMG, and Blomqvist more than half a minute behind #999 in fourth.

The pole-sitters suffered a major setback on Lap 116 when Pilet had to pit due to a right-rear puncture and dropped a lap, but worse was to come when Car #911 was issued a 15-second time penalty for a breach of pit stop procedure concerning the role of the car controller.

Marciello led Pepper by 3.9s when he pitted on Lap 118, followed into the lane by Buurman from third, and Cars #999 and #77 rejoined in 12th and 13th respectively with Maro Engel behind the wheel of the latter.

However, #999 was soon issued the same penalty for a similar indiscretion to that of #911.

Whincup pitted from third on Lap 123 and van Gisbergen took over in 13th position at a lap off the pace, with the next few who pitted also dropping to more than 6.213km behind the leader.

Pepper held his lead over Blomqvist by almost 30 seconds for several laps but that margin had dropped to just over 21 seconds when the Bentley driver pitted at the end of Lap 133.

The key drama during the fourth pit stop cycle was a rubbing right-rear tyre immediately after Mattia Drudi climbed aboard the #222 Audi.

Winkelhock had run off at The Chase late in his stint and the corresponding tyre also had damage when it had been removed from the R8 at the stop which followed.

When the stops were completed, the #7 Bentley was back in the lead with Soulet in the driver’s seat, around half a second up on Marciello in the #999 Mercedes-AMG.

Engel was third in the #77 Mercedes-AMG, from Ben Barnicoat at more than 20 seconds further behind in the #60 McLaren, Liberati in the #18 Nissan, van Gisbergen in the #888 Mercedes-AMG, Caldarelli in the #63 Lamborghini, Craig Lowndes in the #1 Porsche, Drudi, and Buncombe in the #8 M-Sport Bentley.

The top 14 were back on the lead lap but the #911 Porsche was in 15th with its deficit compounded by having to serve the 15-second penalty in that fourth cycle.

GruppeM did the same when Marciello peeled off at the end of Lap 143, but the Mercedes-AMG squad was able to dispatch Fraga in seventh position.

The #2 Valvoline Audi was recently pushed into the garage after Dries Vanthoor slowed with a gearbox problem.

The sister #222 Audi has just come into pit lane with a right-rear tyre failure.

Previous Story Tander out of Bathurst 12 Hour after 'scary' crash