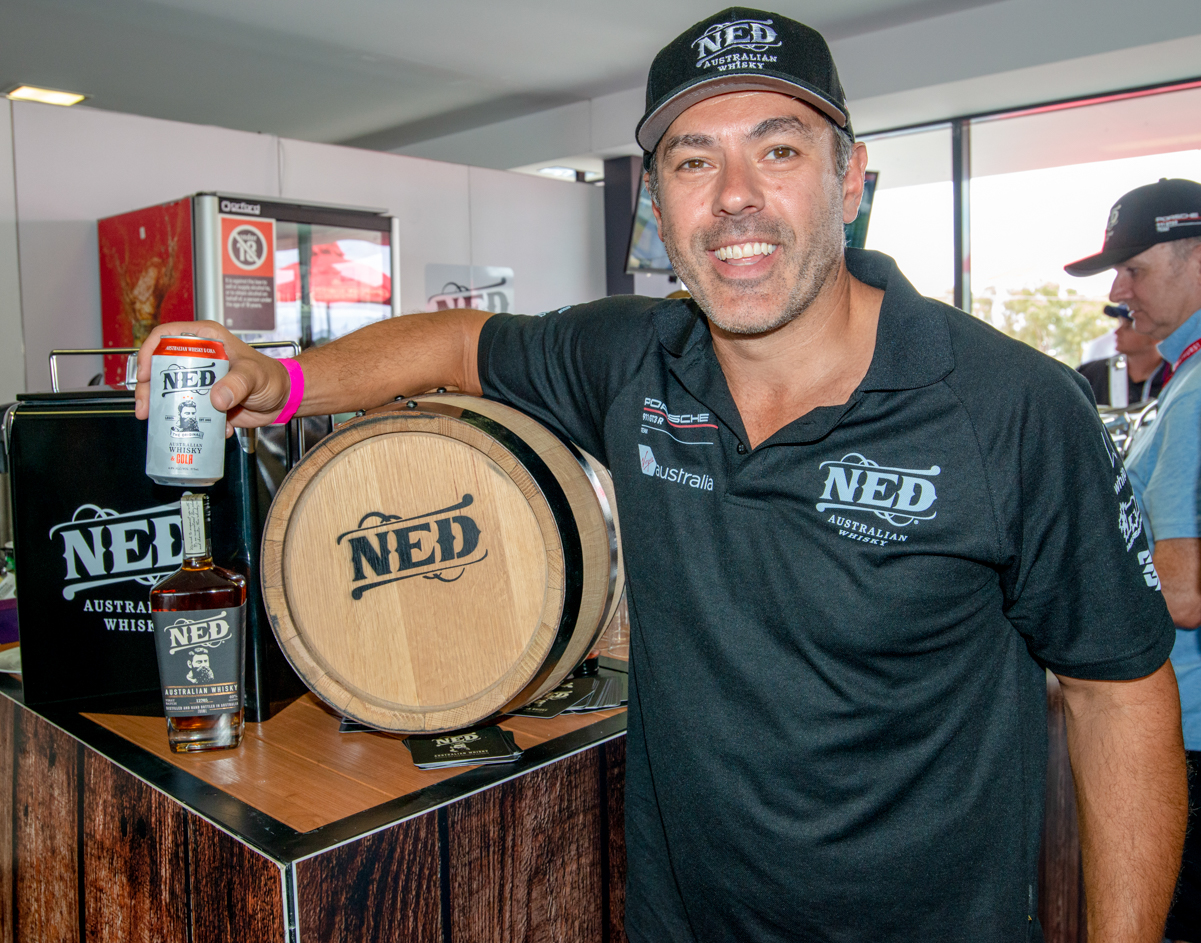 Spirits newcomer Top Shelf International has shown its hand in its desire to use motorsport to market its new Ned Whisky brand at the Liqui-Moly Bathurst 12 Hour this weekend.

After the unveiling of its Supercars partnership with the new-look Kelly Racing Ford team headed by André Heimgartner in December, Ned Whisky is wasting no time getting in the face of the sport’s faithful.

The brand has ‘taken over’ the famous Oxford Hotel in Bathurst this weekend as part of their sponsorship of Earl Bamber Motorsport’s second Porsche driven by David Calvert-Jones, enduro ace Romain Dumas, and Porsche Junior Jaxon Evans.

The activation in Bathurst is just a small taste of what is to come through the Supercars season, according to company heavyweights.

Top Shelf International, which is currently a privately-owned company based around its new state-of-the-art $20-million distillery at Campbellfield in Melbourne, was founded by former Cleanaway and Shell CFO Drew Fairchild. 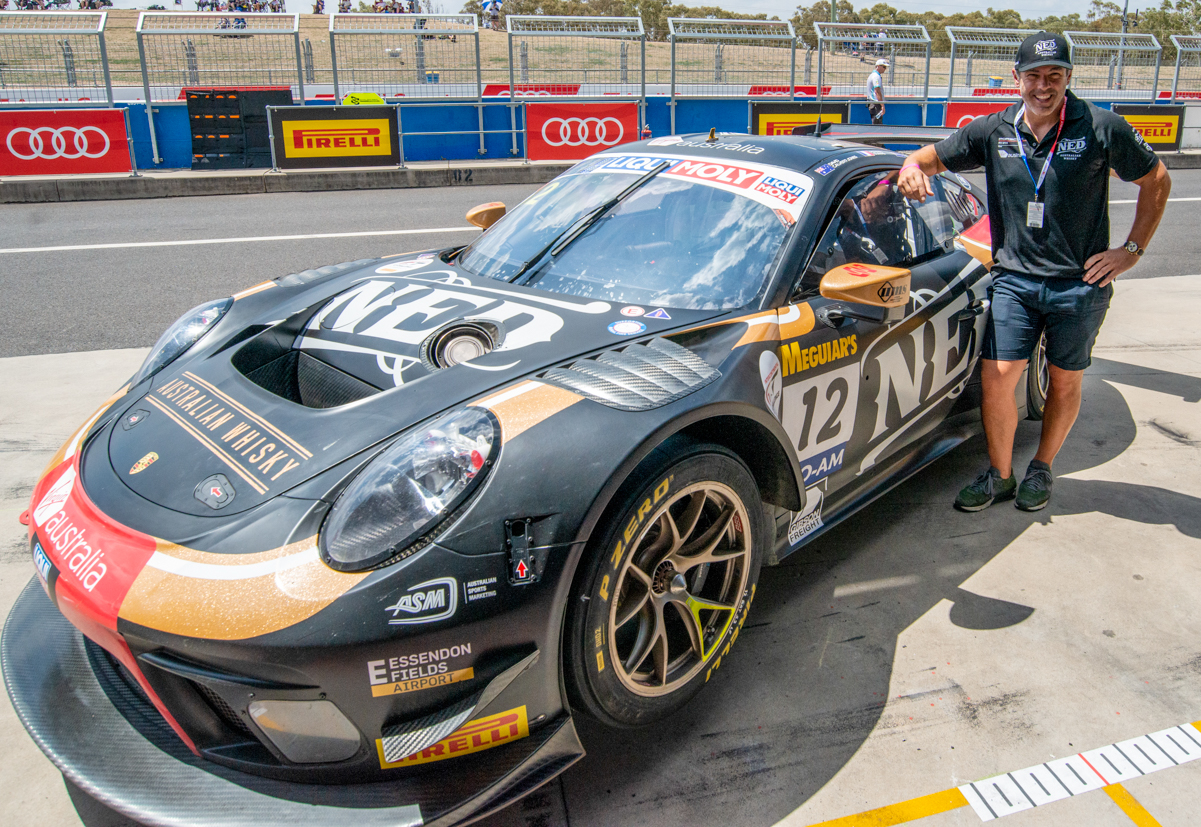 The company’s chairman is Adem Karafili who was the CFO, COO and eventually Managing Director of Swisse Wellness before it was sold to Chinese company Biostime International for almost $1.8 billion.

This weekend’s Bathurst activation is an early sign of what is planned to accelerate the Ned Whisky brand in Australia, according to Karafili.

“We want to get Australians drinking quality Australian whiskey and we think motorsport is a great platform that allows us to get directly to our customers,” Karafili told Speedcafe.com.

“We are here for the long term and that is why we have signed a three-year deal with Kelly Racing.

“We have plans coming together that will see us active at all Supercar events and beyond and that will also incorporate our independent bricks and mortar retailers as well as online partners like Boozebud.com who we are working with through the 12-hour weekend.”

There is also a 700ml bottle which was launched on the same day at the Kelly Racing announcement last month.

“We are 100 percent Australian owned and the whiskey is distilled, matured and hand bottled in Melbourne and we use Australia’s finest grains,” said Karafili.

“We are unashamedly an Australian product and we believe once consumers experience the product they will become loyal to our brand.

“There are no more loyal sports fans than Australian motorsport fans and that’s why we are here.

“The nature of the product means that we can also have some fun and we also intend to do that.”

In recent years Australian motorsport has been a marketing tool for several bourbon and whiskey companies. 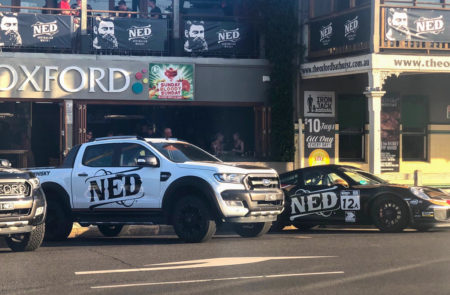 Jack Daniel’s created a whole racing brand initially with Larry Perkins before moving across to Kelly Racing, Jim Beam were naming rights sponsors of Dick Johnson Racing and have had a relationship with Supercars, Woodstock teamed up Tekno and continue to have a personal relationship with Chaz Mostert and the Canadian Club brand has been associated with The Bottle-O partnership with Tickford.

“We understand that new brands come into motorsport and people think ‘what is that all about’ and sometimes they are gone before fans even get an answer,” said Karafili.

“It is important for us to tell our story and for the fans and industry to understand our commitment to the sport straight out of the box.

“We understand that loyalty and trust comes with time, but we are keen to accelerate our relationship with the fans and consumers by letting them know what we are about as soon as possible. From there they will make up their own minds.”

The successful rollout of the Ned Whisky brand in coming months could also determine fresh timings for Top Shelf International being publicly listed on the Australian Stock Exchange.

The Ned Whisky Ford Mustang will turn a wheel in anger for the first time at the Supercars test day at The Bend in South Australia on February 18.