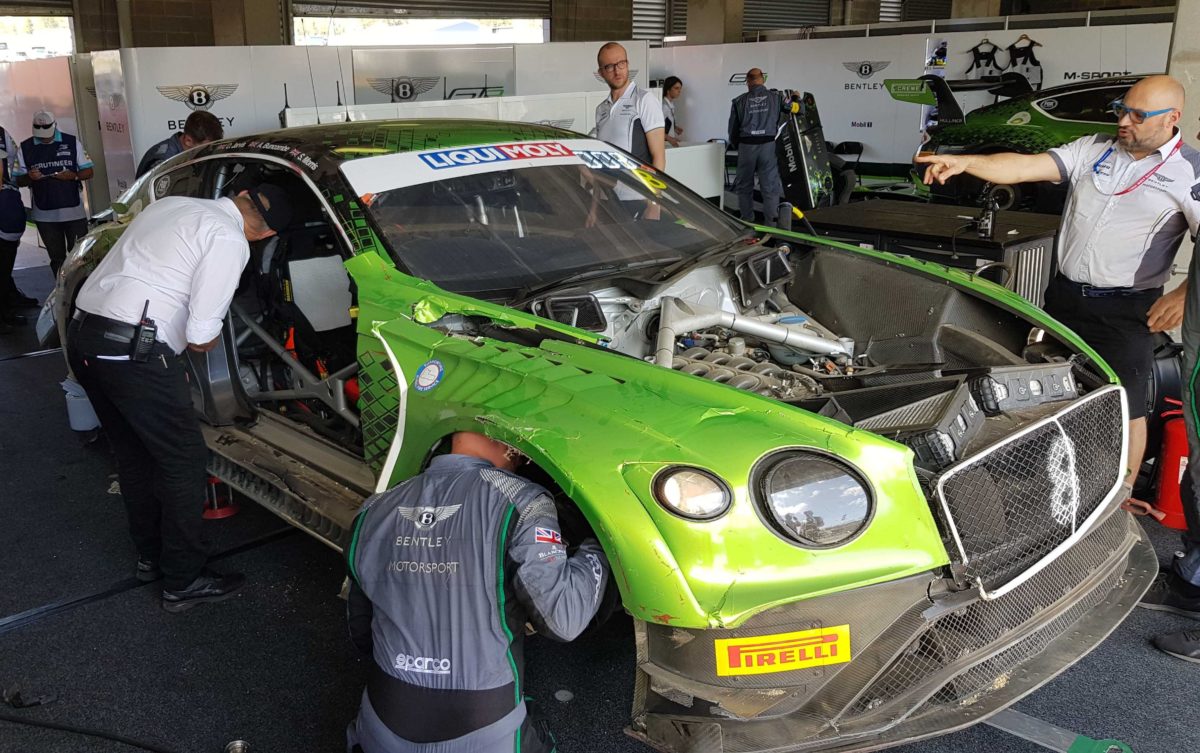 Bentley Team M-Sport is assessing the damage to its #8 Continental GT3 after a braking issue caused Oliver Jarvis to crash late in Practice 5 for the Bathurst 12 Hour.

Jarvis threw the Continental to the inside of the left-hander at The Chase then crossed the track and skated through the grass outfield and thumping a tyre-protected section of the wall.

Bentley Team M-Sport boss Matthew Wilson cited a brake problem as the cause of the incident.

“The main thing is, thankfully, he’s fine,” said Wilson of the British driver moments after the crash.

“He’s obviously managed to scrub off some speed. Until we get the car back, we don’t really know.

“It’s been a trying weekend so far but the boys did an absolutely brilliant job yesterday of getting the car back to good health again.

“I’m sure they can do the same again, but it’s been a trying weekend so far,” he added with nervous laughter.

A small consolation for Bentley is that the tyre belt which covers the wall in question was extended this year following a heavy hit for Tim Pappas at the same location 12 months ago.

It is, however, yet another setback in the “trying weekend so far” which saw both Bentleys miss Practice 4 on the preceding afternoon due to separate issues.

Each made the race track for the final practice session of the event, with Car #7 ending the session 10th fastest and Car #8 in 23rd position.

“It was unbelievable timing, it happened literally both at the same time,” said Wilson of the dramas.

“But in fairness, the bigger work was on Car 7. That had an engine change, and then obviously on Car 8 we had a wiring loom issue so we had to sort of… It wasn’t a big job but it was a big job diagnosing the issue.

“They did a really, really good job of that and putting it back together in a real methodical way.

“As I say, we thought everything was looking quite good this morning but we’ve got a bit of work to do again.”

HubAuto Corsa is also poring over its Ferrari after Daniel Serra had a rear end lose at McPhillamy Park at around the same time as Jarvis’ crash, and spun into the concrete wall.

The team told Speedcafe.com that its continued participation is unclear until it completes a full assessment of the car, which will require removal of rear bodywork and possibly even the engine to determine any chassis damage.

HubAuto Corsa had been moving to a different set-up philosophy, which is understood but not confirmed to have included a reduction in rear wing angle, during Friday’s practice sessions.

“We actually tried a bit of a different philosophy, set-up wise, in the last one, and I think it’ll be better, especially for the race, so that’s promising,” Tim Slade told Speedcafe.com following Practice 4.

“It’s pretty much just to make it faster in some different areas of the track, so sacrifice a bit in some spots and make up in others.”

Qualifying for the 2020 Liqui-Moly Bathurst 12 Hour commences with a session for all cars from 12:40 local time/AEDT.

Well there is a bit of work to do before Qualifying in the #27 and #8 garages 😯#B12hr pic.twitter.com/9cm9oxqbvB