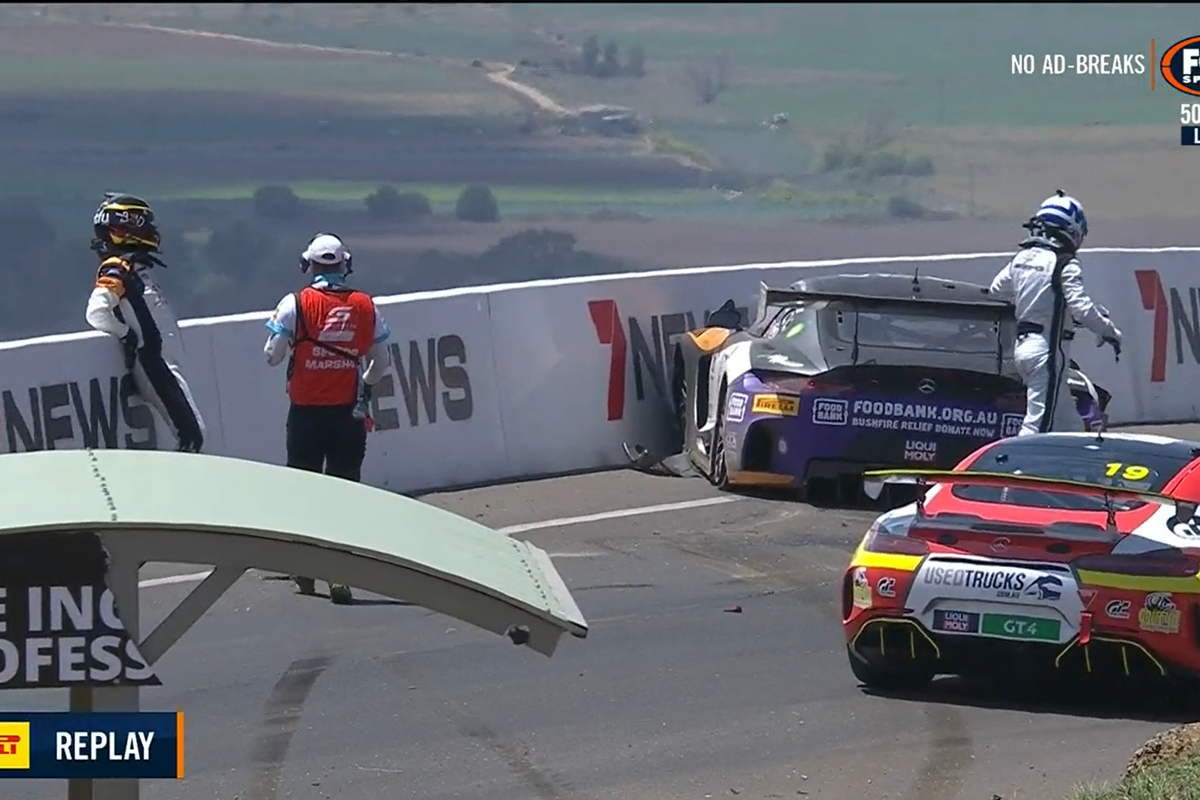 Triple Eight boss Roland Dane has slammed Cameron McConville as an “idiot” who “should have retired years ago” after nudging Sam Shahin into a wall during qualifying at Bathurst.

McConville made light nose-to-rear contact with the #777 Mercedes-AMG on the run through McPhillamy Park towards Skyline in Qualifying 1, which caused Shahin to hit the concrete wall front-on in front of the flag point on driver’s right.

Shahin then cannoned back across the track and into the inside wall where he came to rest, before being helped out of his car by Dirk Muller (#19 Mercedes-AMG GT4), who had parked at the crash scene.

Triple Eight Race Engineering is running the #777 Mercedes-AMG at the Liqui-Moly Bathurst 12 Hour, and Dane was furious with McConville when speaking on television during the consequent red flag period.

“No idea what the impact’s like,” said Dane about the prospect of repairing the car.

“To be honest, I’m more concerned firstly with how Sam is right now, but he got out of the car, looks though he might have been a bit winded, but looked fine.

“The next thing is the idiot who took him out, McConville. He should have retired years ago and that shows it.”

McConville, who started qualifying in the Wall Racing Lamborghini, was apologetic but claimed that Shahin had touched the brakes unexpectedly.

“Look, I feel sorry for Sam, he’s a great guy, honestly did not mean to touch him,” said McConville.

“I went to go under at the Grate, I had my flashers on and he turned across. I got out, didn’t want to make contact.

“Then we came out of Skyline and as I went to pull left to pass him he just hit the brakes. I thought I thought ‘Why are you brake testing me there?’ but I went to go right, he went right, so as I’ve pulled left he’s just touched the brakes and unfortunately just collected the back of him.

“Absolutely feel terrible for those guys.”

Tyler Everingham was also caught up in the incident when he made extremely heavy contact in a bid to avoid the dust cloud, which destroyed the left-front corner of the #92 MARC Car.

The youngster extricated himself from the wreck, which bore the brunt on the corner just in front of where the driver sits, but was in obvious discomfort as he then dropped to his side in the tarred run-off area.

“He’s injured his left leg. He said that he saw a big pile of dust. He’s sure it was a Porsche that he hit.

“He was initially worried because he was behind the 91 car that it was our other car.

The red flag was the second of the session after Frederic Vervisch lost the rear of the #2 Valvoline Audi off the crest at McPhillamy Park and spun into the tyre wall at the back of the gravel trap.

Brothers Sam and Yasser Shahin had been sharing the Pro-Am Triple Eight entry with Anton De Pasquale and professional sportscar driver Nick Foster, but there is now a question as to whether they will start tomorrow’s race.

Qualifying 1 is back underway now.

Thankfully Everingham is OK after that one. #B12hr #VASC pic.twitter.com/qAZIy3fHXa