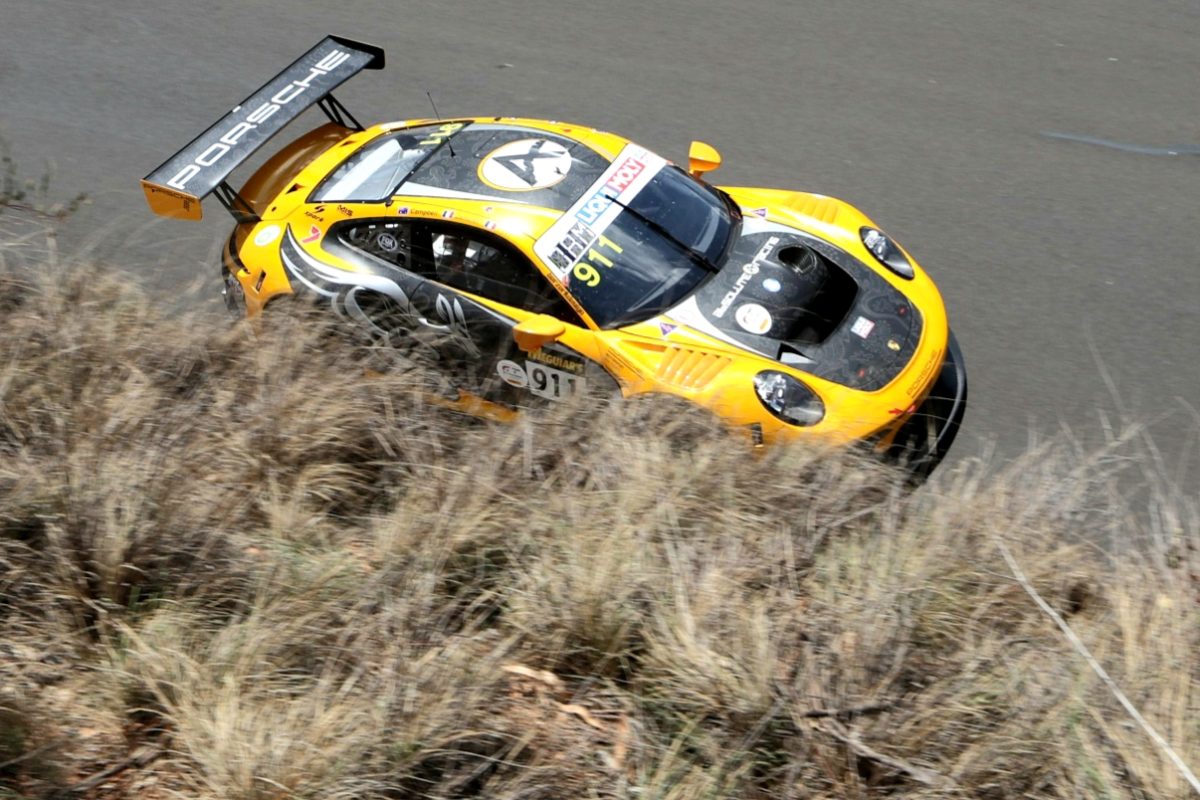 Matt Campbell has put the #911 Absolute Porsche on provisional pole for the Bathurst 12 Hour in a session which ended with Dean Canto parked on top of a wall.

Canto lost the rear of the #29 Trofeo Lamborghini off the crest at McPhillamy Park and pirouetted through the gravel trap before backing into the tyre wall.

The impact propelled the car into the air and onto the grass embankment before he came to rest on top of the wall near the marshals’ post.

Canto stepped out of the car but, as the incident occurred with a minute remaining in the half-hour Qualifying 2 session, the red flag effectively brought an end to proceedings.

The biggest crash of the session, however, belonged to Marvin Kirchhofer when he appeared to roll the #62 R-Motorsport Aston Martin in an incident set off when he touched the wall at Metal Grate.

Campbell set the pace with a 2:03.4336s in the second of two qualifying sessions, the decisive stanza for the Class A entries.

Car #911 had only been 15th when the Queenslander, who took the chequered flag first in last year’s Liqui-Moly Bathurst 12 Hour, punched out what would be the fastest lap of the session in the 22nd minute.

Maro Engel earned second for Mercedes-AMG Team Craft-Bamboo Black Falcon with a 2:03.5361s in the minute prior to the final red flag aboard Car #77.

He and Alvaro Parente had been among those who were early entrants in the ‘threes’ in Qualifying 2 and the latter finished third fastest on a 2:03.6021s in the #60 59Racing McLaren with an even later lap than Engel’s best.

Raffaele Marciello completed just the five laps in Qualifying 2 for Mercedes-AMG Team GruppeM but the Italian’s first was a 2:03.7307s which had him second at that point and his second was a 2:03.6541s.

It had him in the lead prior to Campbell’s ultimate provisional pole lap and stood up for fourth position all told for the #999 Mercedes-AMG.

The #1 Earl Bamber Motorsport Porsche had been in the danger zone for missing this afternoon’s Pirelli Top 10 Shootout until Laurens Vanthoor, who took over from Craig Lowndes midway through Qualifying 1, put in a 2:03.6832s in the 28th minute that lifted him from ninth position and was good enough for fifth when the session ended.

Kelvin van der Linde had blazed to a 2:03.6858s straight off the bat and while he did not improve thereafter, it saw the #222 Valvoline Audi classified sixth in the final wash-up.

The #63 Orange1 FFF Lamborghini was outside the top 20 until Marco Mapelli recorded a 2:03.9407s in the 26th minute which put it a provisional ninth.

First out in the Shootout will be the #888 Triple Eight Mercedes-AMG after Shane van Gisbergen clocked a 2:03.9882s.

The New Zealander was the sixth driver to make the ‘threes’ and, as it turned out, that was the threshold for making the top 10.

Jules Gounon was first on the outside with a 2:04.1107s in the #7 Bentley Team M-Sport entry, having been bumped out of the Shootout by Dennis’ late effort.

Car #7 will share the sixth row with the #912 Absolute Porsche, while David Reynolds put the #75 SunEnergy1 Mercedes-AMG 13th on the grid and Chaz Mostert qualified the #34 Walkenhorst BMW in 15th.

Splitting them is the #2 Valvoline Audi which Frederic Vervisch crashed when he too lost the rear end at McPhillamy Park in Qualifying 1.

Ironically, an even bigger crash involving Sam Shahin, Cameron McConville, and Tyler Everingham at the same location caused a red flag which gave the Audi crew time to repair #2 and send Vervisch back onto the circuit before the end of the session.

Dries Vanthoor was behind the wheel for Qualifying 2 and achieved a fastest lap of 2:04.2742s.

Also in Qualifying 1, for all classes, Nick Percat lost his fastest lap for going under the 2:05s limit for MARC II Cars but his next-best 2:05.5375s was still more than good enough for the Invitational Class pole.

The Top 10 Shootout starts this afternoon at 17:05 local time/AEDT.

Results: Qualifying 2 Class A only The #29 Lamborghini on the wall