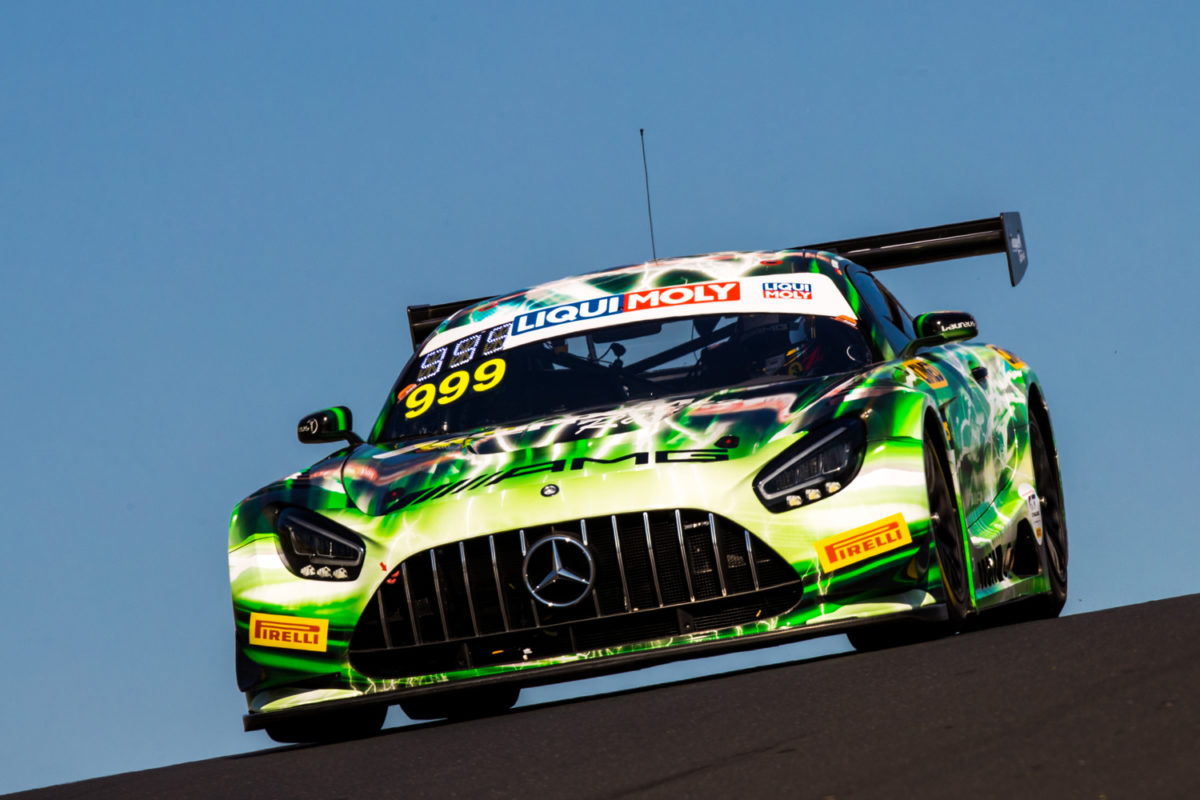 Mercedes-AMG GruppeM’s Raffaele Marciello has set the pace in Practice 2 for the Liqui-Moly Bathurst 12 Hour while Maro Engel hit the wall.

Marciello was one of two drivers to break into the 2:04s over the course of the shortened, 50-minute session, with Kelvin van der Linde exactly a hundredth of a second slower in the #222 Audi Sport Team Valvoline car.

Engel’s early effort stood up for third despite the #77 Craft-Bamboo Black Falcon Mercedes-AMG having to be trucked back to pit lane, while Christopher Mies (#222 Valvoline Audi) and Laurens Vanthoor (#1 Earl Bamber Motorsport Porsche) rounded out the top five.

He was joined in the low- to mid-fives by van der Linde and subsequently Marciello (#999 Mercedes-AMG), before the latter rolled out a 2:04.7819s on the final flyer of his first run.

Van der Linde looked like he might then snatch top spot around the quarter-hour mark, going fastest to the first and second sectors but falling short by 0.0100s after kicking up the dust at Murray’s Corner.

Mies had an innocuous run up the road at Hell Corner before he moved up to fourth position with a 2:05.1650s, and Laurens Vanthoor wheeled Car #1 to a 2:05.1935s to take up fifth before the half-hour was up.

Marco Mapelli then clocked a new fastest first sector in the #63 Orange1 FFF Lamborghini but found no improvement over the course of that entry’s 11th lap.

A red flag was called moments later, in the 34th minute, for separate incidents including Engel reportedly backing the #77 Mercedes-AMG into the wall in the first sector.

The #12 Earl Bamber Motorsport Porsche, in which Romain Dumas had been behind the wheel, was towed back to the pits after stopping early in the third sector under the same red flag, and is understood to now be undergoing an engine change.

With the clock continuing to count down on a session already snipped by 10 minutes due to incidents earlier in the day, just over another 11 minutes was lost.

Practice 2 resumed with slightly less than five minutes left, after which time the only somewhat notable movement was that of Ben Barker lifting the #4 Grove Porsche up a spot to 11th outright and consolidating first position in the Pro-Am subclass.

The outright top 10 was completed by the #2 Valvoline Audi in sixth, from the #888 Triple Eight Mercedes-AMG, the #7 M-Sport Bentley, the #63 Lamborghini, and the #18 Nissan, which was the sole KCMG entry to take to the track after Josh Burdon’s late Practice 1 crash.

Maximilian Gotz had the bulk of the running in Car #888, including setting its fastest lap of 2:05.469s, with Jamie Whincup getting a brief steer after the red flag.