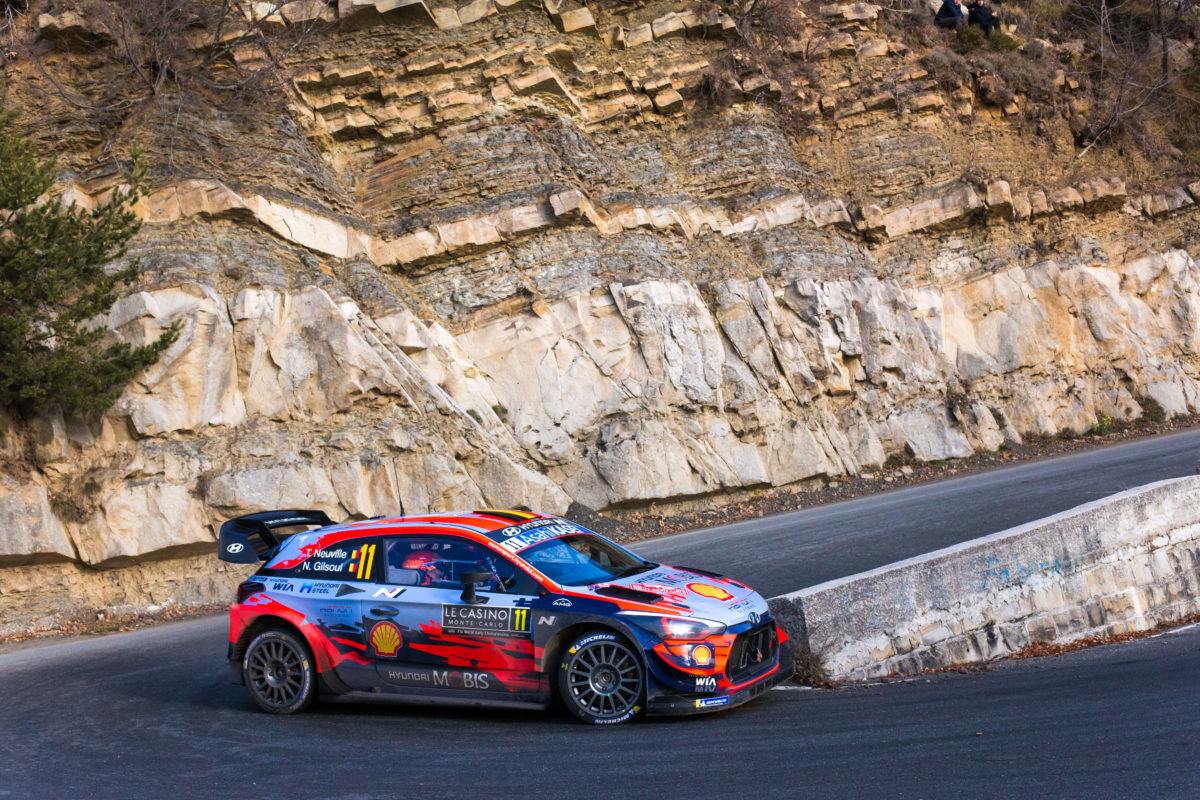 Hyundai’s Thierry Neuville has prevailed in a battle with Toyota’s Sebastien Ogier and Elfyn Evans to bag his first Rallye Monte-Carlo victory.

Neuville’s new team-mate Ott Tanak, however, experienced a monster crash on his first full day of competition as the current World Rally Champion and scored no points.

As such, he is already 30 points down on the Belgian incumbent at Hyundai given Neuville beat Ogier to a win in the Power Stage by 0.016s.

Neuville was 19.1s ahead of Ogier having taken a sizeable win in the latter of the two Thursday night stages, but Evans took over top spot the next morning.

By the end of Friday, Ogier had usurped his Toyota team-mate, who damaged a rim in a ditch during the afternoon loop, while Neuville sat third at 6.4s behind the Frenchman and 5.2s behind the Briton.

Ogier edged further ahead at the start of Saturday but Evans turned the tables in the second stage of the morning loop to move into a 4.8s advantage in the rally overall.

They were tied up a stage later when Ogier beat Evans by 4.8s on the St Ledger Les Melezes to La batie Neuve test, which Neuville won by 0.8s.

Evans moved back into a clear lead of 4.9s despite a small error on Special Stage 12, the last of the penultimate day, while Neuville was fastest again and closed to 1.5s behind Ogier.

Neuville split the top two Toyotas by racking up another stage win at the start of Sunday, and turned a 1.4s deficit into a 4.0s lead over Evans when he also set the pace on SS14.

He started the Power Stage 11.1s up on Evans and prevailed in that run through the La Cabanette to Col De Braus by a slim margin over Ogier.

That made for a sweep of Sunday’s four stages for Neuville, eight of the last nine, and nine for the rally in total, as the Hyundai driver triumphed in Monte-Carlo by 12.6s all told.

“This is an amazing way to start the season and a fantastic feeling,” said the 2019 championship runner-up.

“I am really pleased that we have finally taken victory in Monte-Carlo; it’s been something we’ve chased for a while. We’ve come close before but now we’ve done it.”

Evans slipped from second to third overall on the Power Stage with the fourth fastest time through the final test, behind M-Sport Ford’s Teemu Suninen.

Esapekka Lappi took fourth overall in an M-Sport Ford, as well as one Power Stage point, ahead of Toyota’s Kalle Rovanpera.

Sebastien Loeb finished the event sixth, having started the final day in fourth before he nearly skated his Hyundai over the edge of a hill on SS14 and needed a push from spectators.

Neuville leads Ogier by eight championship points, while his Hyundai team is two points ahead of the latter’s Toyota Gazoo squad in the manufacturers’ standings.