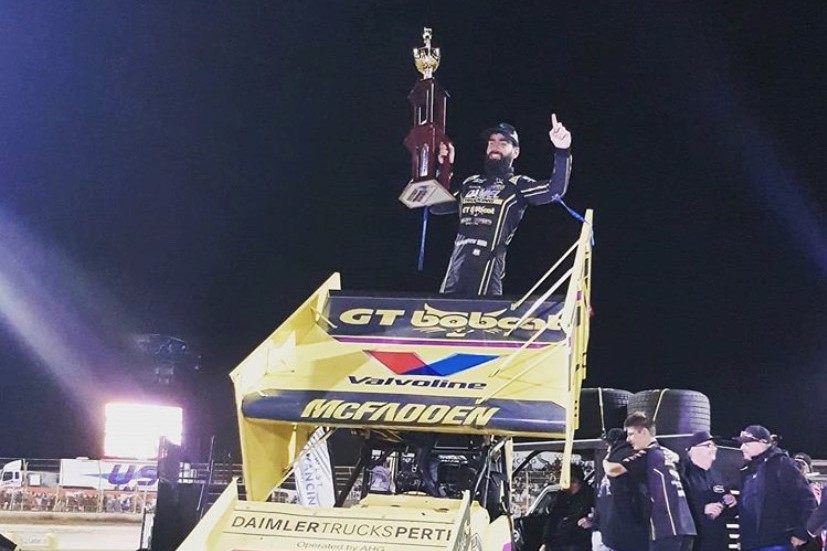 James McFadden has won the Grand Annual Sprintcar Classic at Premier Speedway for the second time.

The Warrnambool local led home his good friend Jamie Veal to add the 2020 Classic title to his 2017 crown.

The only sour note for the Monte Motorsport driver was engine damage which prevented him from doing the traditional Classic winning doughnuts before the sold-out crowd.

“I dropped a cylinder on the final lap and I’m dead set shattered I can’t do the donuts for the crowd,” McFadden said before apologising to the audience of more than 12,000.

“Unfortunately, that engine is rooted!”

The 40-lap Classic final’s defining moment came on Lap 6, when McFadden made a move on pole-sitter and early race leader Robbie Farr.

Farr, the defending Classic champion, rode the wheel of a lapped car in the move and suffered a brutal accident, ending his race.

From that moment on McFadden was never headed, dominating the final despite a number of stoppages.

On Australia Day, he led home an all Australian podium with Veal second and veteran Kerry Madsen third, while American Cory Eliason was fourth.

Marcus Dumesny continued his impressive weekend, finishing fifth to back up his feature win on night two of the event.

The victory follows a year in which McFadden’s stocks rose in the United States after replacing Kasey Kahne in his World of Outlaws team, and winning the Knoxville Nationals 360 title.

“It’s been a crazy year and a crazy weekend,” said McFadden, who will again race for Kahne’s team in 2020.

“This event just gets bigger and bigger so to win it for a second time is so satisfying.

“Everyone here should be so proud of the Classic, it’s one of the best races in the world.”

NASCAR star Kyle Larson had a weekend he’d like to forget in Warrnambool.

After a miserable qualifying night on Friday, Larson again suffered a heavy accident in his final heat race, prematurely ending his second tilt at the Classic.