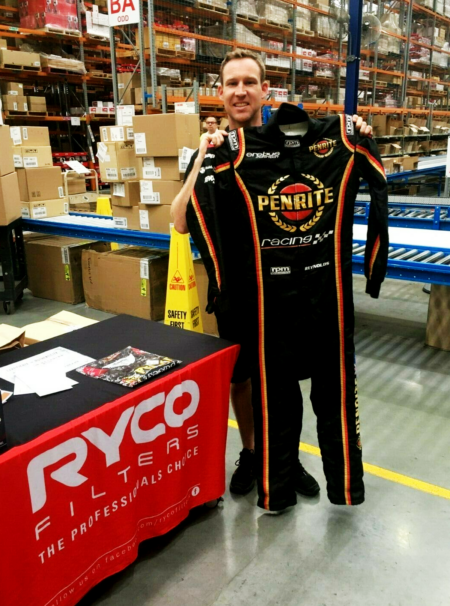 David Reynolds with the racesuit on offer

Supercars front-runner David Reynolds and Erebus Motorsport sponsor Ryco Filters have teamed up to donate a race suit to be auctioned for bushfire relief.

The suit was one of two used in the 2019 championship in which Reynolds finished sixth.

The suits are rotated through a race weekend, so the suit for auction was used at most events during the season.

All money raised from the auction will be donated to the Australian Red Cross bushfire relief fund.

Fans can bid on the suit here.

Reynolds is originally from Albury on the NSW-Victoria border which has been a central point for fire fighting organisations and relief operations for several weeks.

The Albury airport has been a hub for fire-fighting aircraft which have been refuelling and reloading with fire retardant.

“I have seen the devastation the fires have had and it’s just incredible,” said Reynolds.

“It is fantastic how people in Australia and internationally have gotten behind the cause.

“We did a fundraiser with Ryco staff and it generated $7000 from just a small group of people which was then topped up to $10,000.

“Ryco have done some cool things during this period and it is great they have offered up my suit, which I am happy to personally sign with a message to the winning bidder.

“I hope the fans dig deep and this ends up as a feature in someone’s pool room or office, hey I don’t care where they hang it.

“They could wear it to bed if they want, as long as we get some decent cash for bushfire relief.”

Reynolds will be back in action in the Liqui-Moly Bathurst 12-hour with Kenny Habul’s SunEnergy1 Mercedes-AMG team next week.

Next Story Fullwood relishing chance to work with Mostert at WAU