Toby Price has admitted that his “head hasn’t been a hundred percent” since he discovered Paulo Goncalves’ ultimately fatal accident after completing a tumultuous Dakar Rally in third position.

Price achieved another overall podium having finished in the same position on the 12th and final stage of the first Dakar to be held in Saudi Arabia.

His journey was marred by drama literally on Day 1, when his road book jammed and tore, and he won that stage despite incurring a two-minute penalty.

The Red Bull KTM rider lost a quarter of an hour due to a tyre problem at the end of the first week, then was first to discover Goncalves as he lay prone following a fall on Stage 7.

Price stayed with the Portuguese rider and helped with carrying him to the medical helicopter, later explaining that he felt compelled to do so in part because ‘Speedy Goncalves’ had stopped when the Australian broke his leg in 2017.

Having been credited with the time he lost attending to the crash, Price sat fourth after that stage and remained on the cusp of the podium positions for the remainder of the event.

When asked what he missed in his battle with the new Dakar champion, Ricky Brabec, Price said, “Just everything, (for) this whole two weeks, that have gone wrong.

“Some things were out of my control, and I lose 16 minutes with a bib-mousse falling apart, so if I had these 16 minutes back, then the fight would have been really close.

“Stage 7 is one that I’ll remember forever, for Paulo, but not for a good reason, and just since then my head hasn’t been a hundred percent

“But we’re at the finish line safe, I’m going to be able to go home and just think these things over, and come back hopefully bigger and stronger next year.”

The only time he has missed such a result was 2017, when he broke his left leg.

“Still on the podium; definitely it’s not the result we came for but, with the two weeks we’ve had, I’m quite glad to keep my podium streak going,” stated Price.

“Every time I’ve lined up and I’ve made the finish line, I’ve been on a podium step, so this, for me, is a big achievement, especially after these two weeks.

“It’s been tough, and we just regroup and we get ready for Dakar 2021 and we come back here to try and get our #1 plate back.”

Six Australians started the Dakar Rally, all in the Bikes class, and all six made the finish with Rodney Faggotter next best on a Yamaha in 13th. 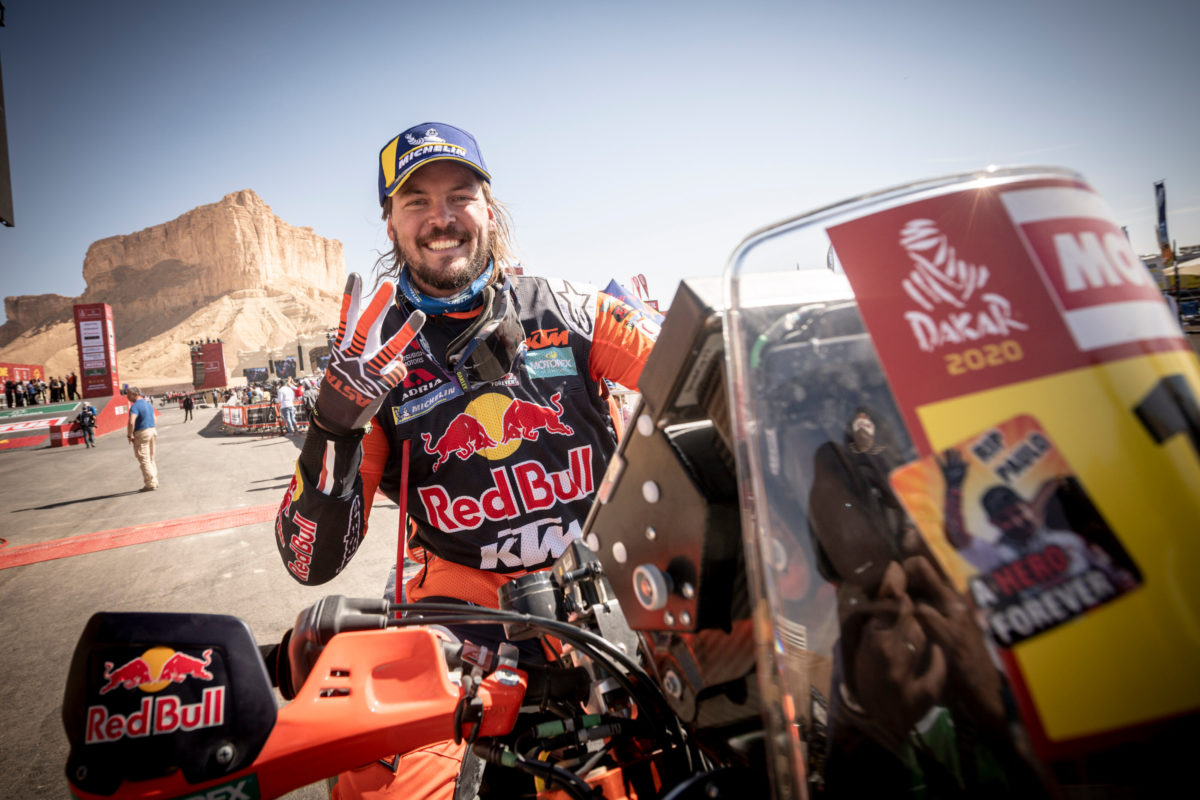 Price at the finish podium