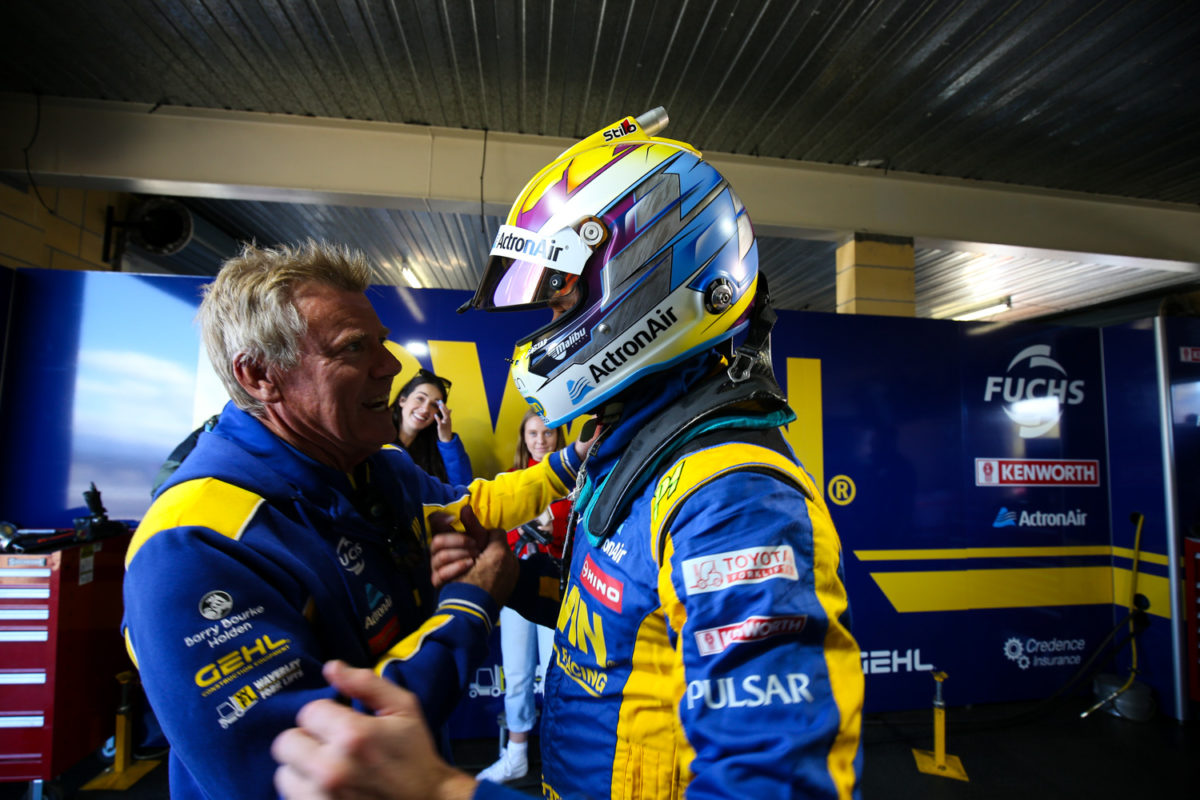 Charlie Schwerkolt and Mark Winterbottom at Symmons Plains in 2019

Charlie Schwerkolt has set Team 18 the target of top 10s for both cars at each event of this year’s Virgin Australia Supercars Championship.

The Melbourne-based outfit has expanded to a multi-car operation for 2020 with Scott Pye joining new-for-2019 recruit Mark Winterbottom, the latter of whom continues in the #18 Irwin Tools entry.

After a succession of tumultuous years as a largely independent, single-car outfit, a revamped Team 18 achieved its first pole position through Winterbottom at last year’s Symmons Plains event.

Winterbottom went on to finish 13th in the championship with best race results of fourth in the corresponding 50-lapper in Tasmania and the Saturday race at The Bend, while sixth in the Supercheap Auto Bathurst 1000 was also a highlight.

“I think Scott Pye and Mark Winterbottom will work really well together this year with a combination of youth and experience,” he wrote in Team 18’s January newsletter.

“Frosty has been around the sport a long time with tremendous results including a championship win and a Bathurst win, so there’s a lot that Scott can learn from teaming up with him.

“I think they’re going to make great team-mates, pushing each other and the team further up the field.

“It’s a big year for results. It will be Frosty’s second year with Team 18 and while it’s hard to put a number on it before cars have even hit the track, as a goal I’d love to see both cars finishing in the top ten at every event.”

Schwerkolt believes that the 30-year-old also has championship potential.

“It is now his time to shine and I believe he has all the makings of a future champion,” wrote Schwerkolt of Pye.

“We all know he is an awesome driver especially given his performance at the final round at Newcastle.

“We are so excited to have him on board and know that he will be a great asset to the team.”

The move to two cars represents the second major makeover for Team 18 in as many seasons.

Having formed an alliance with Triple Eight Race Engineering and bought one fresh ZB Commodore for last year, it took delivery of Shane van Gisbergen’s 2019 race car in December.

Team 18 also signed up its 2019 Pirtek Enduro Cup co-driver, Steven Richards, to a relationship management role, and has already secured James Golding and Dean Fiore as co-drivers for Winterbottom and Pye, respectively.

“We have a massive year ahead at Team 18,” declared Schwerkolt.

“It has always been a dream to expand the team to two cars and build the team to be a force in the Supercars field. We’re straight back into things with meetings on the hour every hour and we’re firing on all eight cylinders.

“It has been a long and extensive recruitment process in the off-season. Steve Henderson (team manager), Steve Richards and myself interviewed extensively and got the right people we wanted for the team.

“It has been a big task to get more staff onboard but every day it’s starting to feel like a big race team with lots of new faces and we are on target to get everything ready for Round 1 at Adelaide.”

Supercars’ official pre-season test day will be held on Tuesday, February 18 at The Bend Motorsport Park, two days prior to opening practice at the Superloop Adelaide 500.