Sainz still up by 10 minutes with a stage to go

Sainz still up by 10 minutes with a stage to go 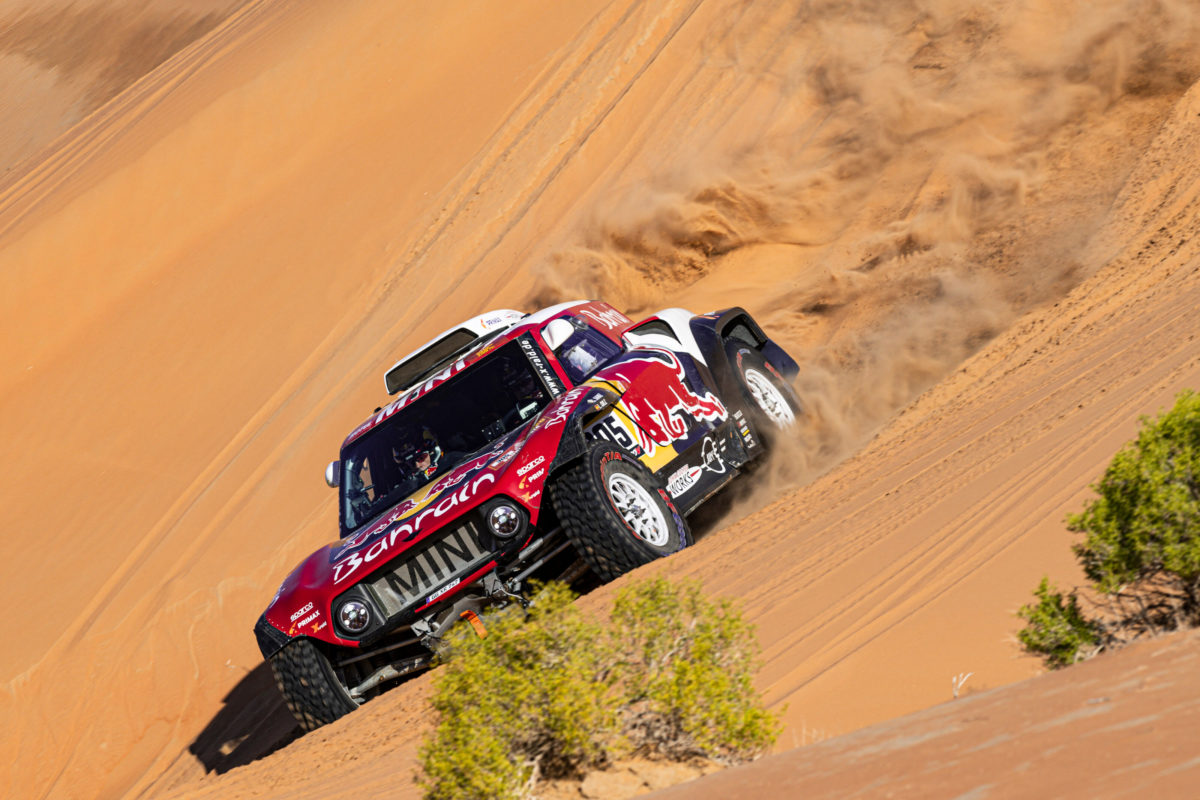 Carlos Sainz will head into the final day of the 2020 Dakar Rally with a lead exceeding 10 minutes despite finishing behind Stephane Peterhansel and Nasser Al-Attiyah on Stage 11.

Peterhansel won the 379km special from Shubaytah to Haradh by 10 seconds over Al-Attiyah, meaning the latter is now only six seconds ahead of the former in second overall.

Both enjoyed far more favourable road positions than Sainz, the Stage 10 winner, after their mishaps of the preceding day, and Peterhansel was fastest to every waypoint.

Al-Attiyah similarly held second spot all the way but was as far as 2:05s in arrears, at Kilometre 162, before making up 40 seconds in the final run to the finish to cling on to the runner-up position for now.

The stage win is Peterhansel’s 80th in the event’s history (47th in a Car), a clear record, consolidating the 13-time champion’s status as ‘Mr Dakar’.

The Bahrain X-raid driver was nevertheless somewhat disappointed with his showing and was focusing on the hopes of team-mate Sainz in the other John Cooper Works buggy.

“Today it was not really a good day for us,” declared Peterhansel.

“For sure, we started first this morning and we get just 20 kilometres before the end of the stage and we turn around eight or 10 minutes before we find the good track.

“Nasser lost a little bit more but Carlos was really lucky because he arrived just when we found the good way and it was easy to follow us.

“At the end we finished together but I think that it’s really good because Carlos was the leader in the beginning, he was really fast, and now he takes a gap to Nasser for the victory (and) for the team it’s more comfortable.”

Al-Attiyah also effectively conceded defeat to Sainz and the 2019 champion now has eyes on protecting second position from Peterhansel.

“We paid dearly for our mistake yesterday,” said the factory Toyota Hilux driver.

“Making it so far is already great, there’s one stage to go and we’ll see how it goes.”

Sainz was third fastest at 8:03s slower than Peterhansel and leads the rally by 10:17s with one stage remaining.

The Spaniard was not so bold about his prospects but gave an air of quiet confidence as he seeks his third Dakar title.

“I think it’s not bad; we passed the marathon (stages), which is always important,” said Sainz.

“Now we are missing one; we need to do some preparation in the car but everything is working fine.

“One more day. Wait and see what happens, what is the difference, and try to concentrate for tomorrow.”

Overall, Al Rajhi looks likely to finish fourth given he holds an advantage of over 18 minutes to De Villiers, while Alonso regained one spot to sit 13th after his Stage 10 rollover.

In Trucks, the Kamaz juggernaut is poised for yet another Dakar victory having swept the top four on Stage 11.

Andrey Karginov won the day and now leads by 39:33s overall, with team-mate Anton Shibalov second and Maz’s Siarhei Viazovich more than an hour further back in third.

Ignacio Casale finished second on the Quads stage to extend his event lead to 21:16s, while Casey Currie’s advantage in the SSV class is a slightly reduced 45:33s.

Toby Price (KTM) moved back into the podium positions in the Bikes and now trails second position by 8:38s but has a margin of 7:19s on fourth position.

The 12th and final stage of Dakar 2020 is a shortened 167km special plus 262km of liaison from Haradh to Qiddiya.