Price set to consolidate on final day of Dakar 2020 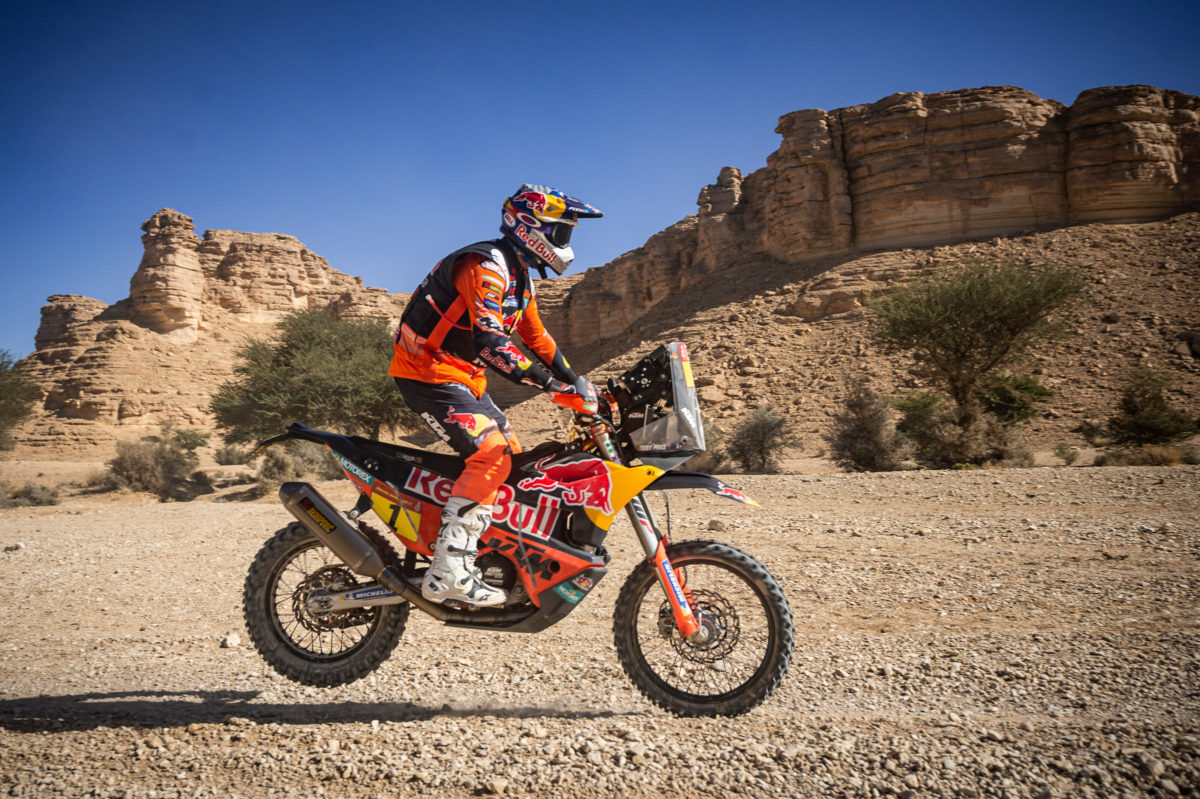 Toby Price appears to be focused on consolidating third position on the final day of Dakar 2020 as the ‘smart’ Honda team closes in on victory through Ricky Brabec.

Price moved back into the podium positions on Stage 11 of 12 despite being only fifth fastest back to Haradh, 5:49s off the pace of stage winner Pablo Quintanilla.

The Australian trails Quintanilla by 8:38s overall, with the Rockstar Energy Husqvarna rider 13:56s back from Brabec, but Price also has 7:19s over Red Bull KTM team-mate Matthias Walkner, who holds fourth.

Such was Brabec’s advantage at the start of the day, the Monster Energy Honda rider enjoys a relatively comfortable advantage despite riding at “about 70 percent” and dropping 11:48s to Quintanilla on the penultimate stage.

“It’s been a good stage and at the moment Honda just needs to protect their lead,” said Price.

“They’re doing a very good job of this and the guys are riding fast and riding smart and riding really strong, so it’s definitely making it hard for us to try and make up that gap.

“But we’re doing our best, we’re trying to keep in the fight. We’ve only got one more day to go and it makes it a little bit difficult.

“I just want to leave this one unhurt and all in one piece and I’ll be happy,” he added, having famously won while carrying a broken wrist through last year’s Dakar.

Price later revealed on social media that he was one of a number of competitors who had a tight call with fuel on the return leg of the marathon stages between Shubaytah and Haradh.

“We were in a lot of dunes today, I actually struggled to make the first refuel at 229km,” he wrote.

“I came in there with just one litre of fuel so we really had to preserve and look after the bike to make sure we made the finish.”

Joan Barreda Bort, one of Brabec’s factory Honda team-mates, admitted that he too nearly ran dry before the refuel and had to slow down.

Cars leader Carlos Sainz had to be towed for the last few kilometres of the final neutralisation due to his John Cooper Works buggy running out of diesel, according to Marca.

Sainz, whose advantage of just over 10 minutes at the top of the classification is the smallest of any of the five classes, is the prime beneficiary of a bizarre oversight which has seen Stage 12 shortened by more than half due to construction of a gas pipeline.

The 167km special, reduced from 374km, and 262km liaison takes the field from Haradh to Qiddiyah for the end of the Dakar journey of 2020.