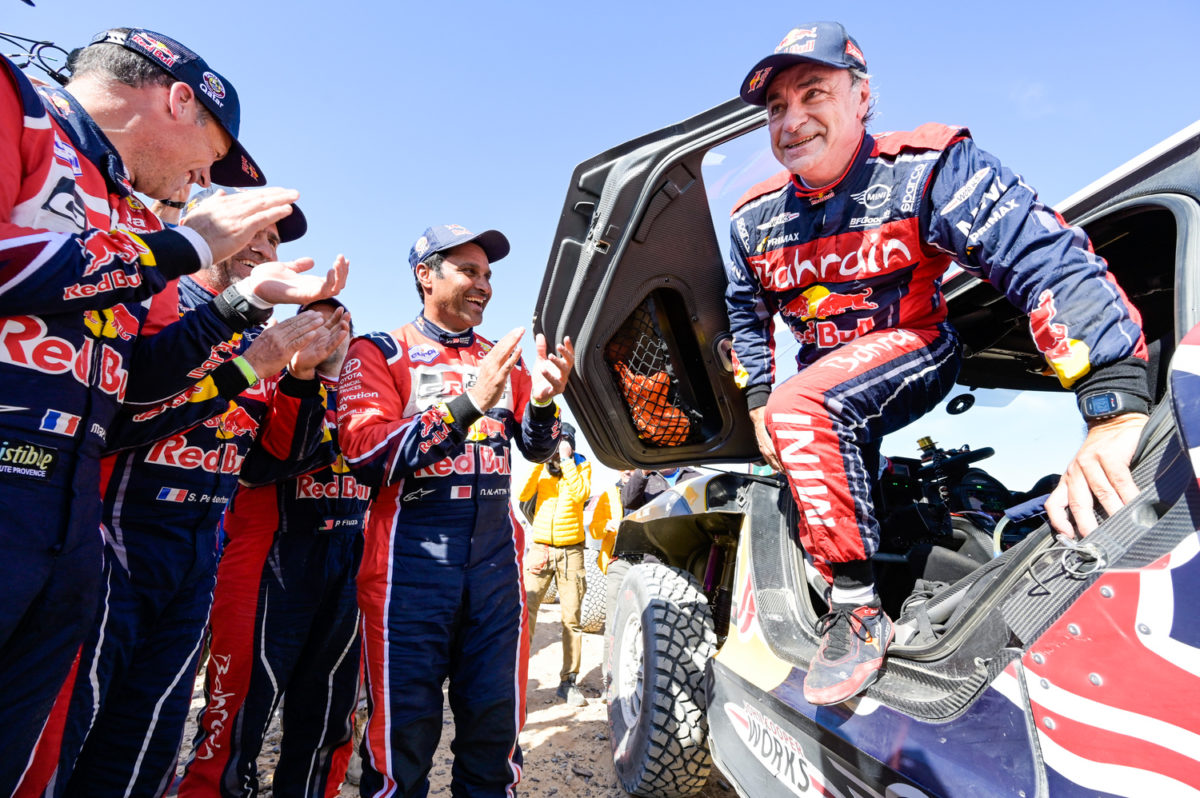 Carlos Sainz has won the Dakar Rally for the third time while 2019 champion Nasser Al-Attiyah successfully saw off Stephane Peterhansel in the battle for second.

While the Cars class was the closest contest heading into the shortened, 167km special between Haradh and Qiddiya, Sainz was still heavily favoured given the 10-minute advantage in his pocket.

The Spaniard won the rally by 6:21s in the end, having brought his Bahrain X-raid John Cooper Works buggy home with the sixth fastest time on Stage 12.

“There’s a lot of effort behind (this); a lot of training, a lot of practice, physically with the team…

“For such a veteran driver, it’s great; you have to work very, very hard.”

When asked where he thought he won the event, the 57-year-old responded, “Since Day 1.

“I think we only know, the three of us (Sainz, Al-Attiyah, Peterhansel), how much we were pushing since Day 1. It has been a flat-out rally from the beginning.”

Toyota Gazoo Racing’s Al-Attiyah had only six seconds on Peterhansel, in the other X-raid buggy, ahead of the final stage but was fastest all the way in the #300 Hilux.

The Qatari had in fact started three minutes behind Peterhansel in terms of road order before catching the Frenchman prior to the Kilometre 69 waypoint,

Al-Attiyah prevailed on the day by 1:32s over Yasir Seaidan (Race World JCW 4×4), and was waiting at the end to salute Sainz.

The absolute embodiment of sportsmanship: @AlAttiyahN waiting for @CSainz_oficial to congratulate him on his #Dakar2020 triumph.

Give it up for those two legends 🙌

Peterhansel ended up fifth for the day and third overall at 9:58s off the pace of Sainz, while Yazeed Al Rajhi (Overdrive Toyota Hilux) claimed fourth on his home soil of Saudi Arabia with ninth on the stage.

Al Rajhi was also the last driver within an hour of Sainz after the 12 stages, while Giniel De Villiers finished fifth overall in a factory Hilux.

Orlando Terranova (X-raid Mini JCW 4×4) took sixth overall having been third fastest through the final special, 3:16s off the pace of Al-Attiyah, while the exploits of Seaidan, another Saudi, kept him ninth overall.

Fernando Alonso rounded off his Dakar debut with a fourth on the stage in his Toyota Gazoo Hilux and 13th overall.

In Trucks, Andrey Karginov moved his margin beyond 40 minutes with another stage win, while Anton Shibalov made it a Kamaz one-two.

The first non-Kamaz entry was the Maz of Siarhei Viazovich in third, more than two hours behind Karginov.

Ignacio Casale cruised to his third Dakar crown in Quads by 18:24s with the fourth fastest time of the final stage, while Casey Currie took out the SSV title by almost 40 minutes in the end despite not winning a stage.

Toby Price could not hold on to the #1 plate but the KTM rider did pick up a fifth podium finish in just his sixth attempt at the Dakar.

As such, all six Australians who started were able to make the finish line in Qiddiyah.