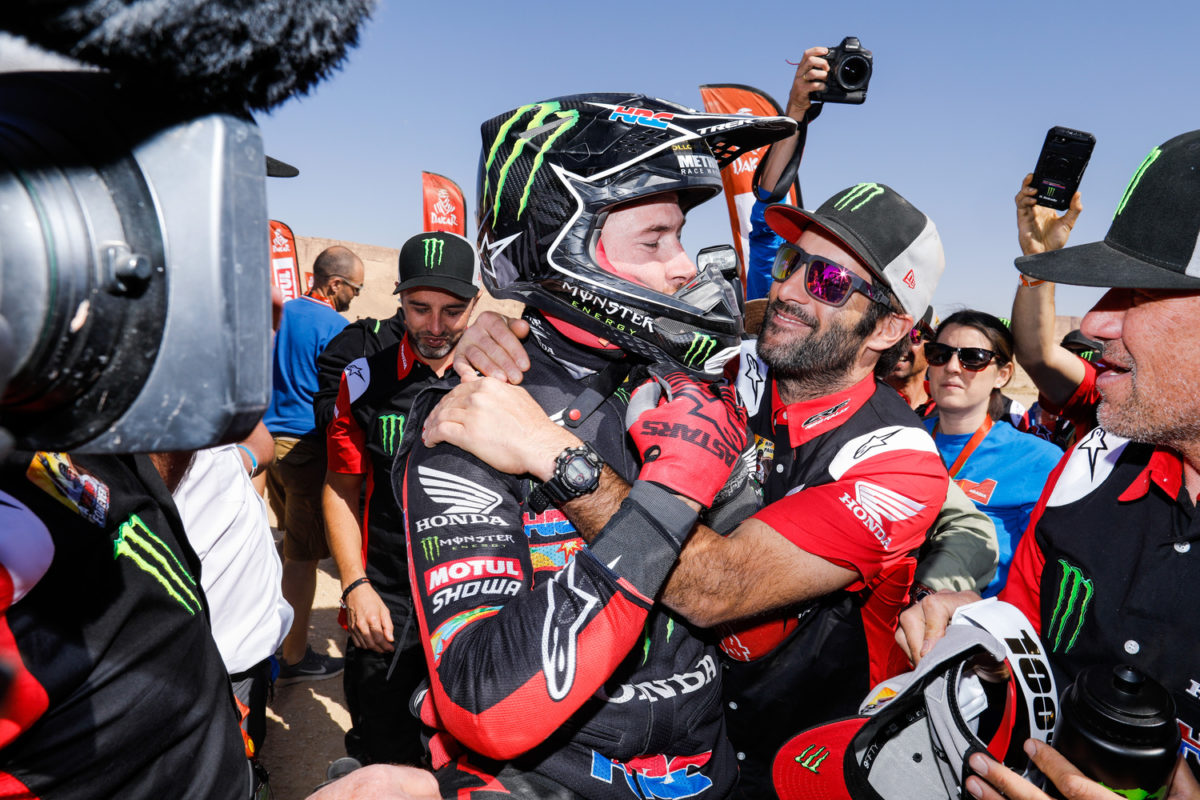 Honda’s Ricky Brabec has won the Dakar Rally for the first time while Toby Price claimed a fifth podium in six attempts.

Brabec’s margin of victory in the Bikes class is 16:26s after he finished second to Monster Energy Honda team-mate Jose Ignacio Cornejo Florimo on Stage 12 from Haradh to Qiddiya.

The event leader since Stage 3 had the luxury of starting 10th on the road with a cushion of almost 14 minutes over Pablo Quintanilla for the shortened, 167km special stage and the title never looked in doubt from there.

Brabec reached the Kilometre 69 waypoint second only to Cornejo, by just five seconds, and led Quintanilla by 18 seconds at Kilometre 119.

Kevin Benavides, meanwhile, had come to a halt just 19km into the special in what appeared to be a planned move to wait for Brabec, his team-mate, after the Argentine started the day almost four hours off the overall pace.

The Honda duo took the finish of the special together, with Brabec logging a stage time 53 seconds slower than Cornejo and 2:30s up on Quintanilla.

He is therefore the first American to win the Dakar and also breaks a streak of 18 consecutive victories for KTM.

“At the end, we put the pieces to the puzzle together,” said Brabec.

“I was getting chills, like the last 30km. Just, the bike was working really good and I was really happy, really happy.

“To be here at the finish of the Dakar – my fifth Dakar, my second time finishing… I woke up this morning just happy to ride the last day and we’re here, we won.”

Your (soon-to-be) winner of #Dakar2020 is ready to tackle the final stretch to @qiddiya and claim his prize on the podium!

Quintanilla was fifth fastest on a day when he had to open the road again but wrapped up a career-best second position on his Rockstar Energy Husqvarna, making the Chilean a two-time Dakar podium finisher.

Price dropped 3:24s relative to Cornejo to the first waypoint, putting the Red Bull KTM rider only 19th, before he rebounded to third for the day at 2:25s off the pace.

The Australian ended the event 24:06s behind the winner but now has five overall podiums in six Dakar starts, including two victories, the exception being the 2017 edition when he broke his left leg.

Cornejo’s final day performance saw him take fourth position overall off another Dakar-winning factory KTM rider in Matthias Walkner, who gave up exactly six minutes through the stage and dropped to fifth in the general classification.

Luciano Benavides ended up one position behind his team-mate after Stage 12 having been fourth fastest on the day.