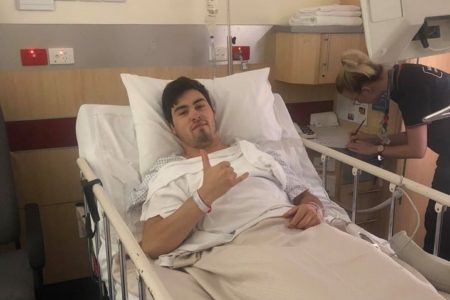 Rising Supercars star Thomas Randle has revealed that he is recovering after yesterday undergoing surgery to have a testicular tumour removed.

According to a post from the 23-year-old on his public Facebook page, he was diagnosed with testicular cancer last week.

Randle, who described the news as “quite a big shock”, is nevertheless upbeat the prospect of receiving a clean bill of health, pending further tests.

Having become a Super2 Series race-winner and Virgin Australia Supercars Championship podium finisher last year, Randle has indicated that he is still set to line up on the grid for Round 1 of the former in Adelaide next month (February 20-23).

“I just thought I’d let you know about a health issue I’ve been dealing with recently and hopefully my story can spread some awareness for blokes around my age,” he wrote on social media.

“Last week I was diagnosed with Testicular Cancer. This was obviously quite a big shock to me and my family and since then I’ve had to undergo multiple tests and scans, while yesterday I had an operation to remove the tumour.

“Testicular Cancer is the second most common form of Cancer found in young men aged 18 to 39. The most common type is seminoma, which usually occurs in men aged between 25 and 50 years.

“The other main type is non-seminoma, which is more common in younger men, usually in their 20s.

“Encouragingly, these are both highly-treatable forms of Cancer.

“I purely want to spread awareness of this to blokes my age or even younger, and also to those in their mid-30s, that if something doesn’t feel quite right get yourself straight to your regular GP.

“I did just that and hopefully doing so results in me being given a clean bill of health and the all clear when I have further tests in the near future.”

Randle has moved from Tickford Racing’s Super2 program to MW Motorsport, which won the series with Bryce Fullwood in 2019, for the season ahead.

“All that aside, and despite the shock and distraction from recent events, I’m now hungrier than ever for the first round of the Dunlop Super2 Series to kick off in Adelaide in just on five weeks,” the post concludes.

Randle is the second national level driver to reveal such news in the last 12 months, after Touring Car Masters competitor Ryan Hansford did so in July 2019.

As Randle is now, Hansford used the event as an opportunity to encourage men to regularly examine themselves for the possibility of testicular cancer, and consult a doctor if they notice any signs.

Hansford was able to compete in the following TCM round later that month.