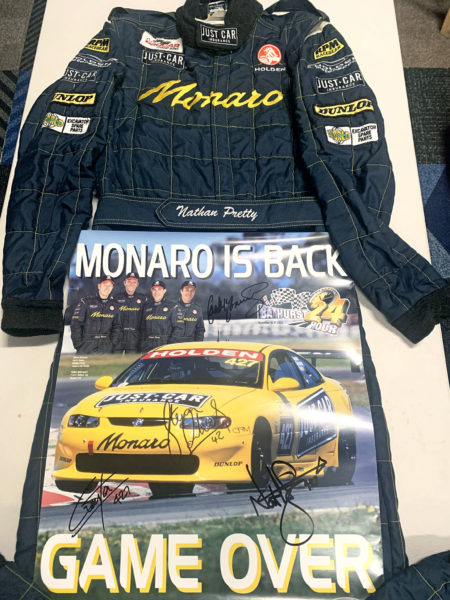 The suit and poster offered for auction

Former Holden ace Nathan Pretty has put up one of his most “prized possessions” for auction in an effort to contribute to bushfire fundraising efforts.

Pretty has offered up his original driving suit from the inaugural Bathurst 24-hour race which he won in the famous No.427 seven-litre Holden Monaro with Garth Tander, Steve Richards, and Cameron McConville in 2002.

The suit also comes with an original team poster signed by all four drivers.

All proceeds from the auction will be split between the Victorian Country Fire Authority and the Australian Red Cross.

Pretty and wife Amanda are from Wodonga and have had many family and friends affected by the fires around the Corryong area and other parts of North-East Victoria.

“This is one of my most prized possessions, but I want to auction it off to help raise funds for those that have been affected by these horrific fires,” said Pretty.

“I’m so proud to be an Australian and hear stories of the amazing efforts that people are going to, to help raise funds for those that are now less fortunate.

“So grab yourself a piece of Australian history for your cave and please dig deep to support those in need.”

Pretty is one of many drivers, teams and organisations both nationally and internationally who have contributed to the local and national fundraising efforts.

Speedcafe.com Platinum Partners, Lloyds Auctions, are continuing their list of auctions and anyone wanting to donate items, experiences of services that can be turned into cash for their nominated charity can do so by clicking on this link and providing the relevant details.

Lloyds are donating all their systems and services so 100 percent of all money raised goes to the nominated charity.

Next Story Fire-damaged endplate to be auctioned for bushfire cause