Rare Lowndes bodywork up for grabs in charity auction

Rare Lowndes bodywork up for grabs in charity auction Lowndes’ car at the 2009 Homebush event Lowndes has signed the panel

A one of a kind front guard from Craig Lowndes’ 2009 TeamVodafone FG Falcon has been put up for grabs in Speedcafe.com’s monthly charity event through partner Lloyds Auctions.

The front left guard was on Lowndes’ Falcon in the final round of the championship at Homebush in Sydney where it had its usual Vodafone red replaced by pink in a one-off support of the McGrath Breast Cancer Foundation. The race-used panel up for auction

It is signed by Lowndes and comes with an image of the car from the day and a Limited Edition boxed 1:48 scale model of the car in pink.

The guard was originally made available by Triple Eight Race Engineering for a charity event after the 2009 championship and was purchased by Speedcafe.com owner Brett ‘Crusher’ Murray who has re-donated it for this auction.

You can bid on the Lowndes memorabilia here.

All proceeds from this rare piece of Australian motorsport history will be going to Motor Racing Ministries.

“It is really encouraging to see the support of Motor Racing Ministries through these monthly charity auctions,” said Lowndes. 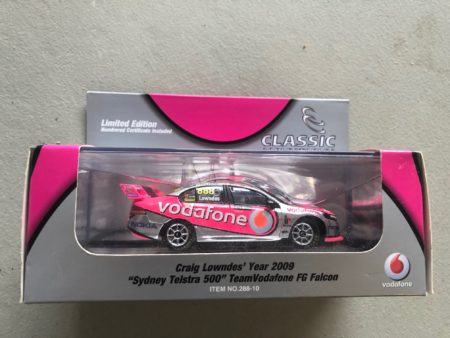 “It’s great to see a piece of memorabilia like this raise money originally for Keith Evers and then be re-donated to generate needed cash for Garry Coleman’s team, who do such an incredible job.

“The guard would look very cool framed up with the model and the image.”

While Motor Racing Ministries has been busy through the summer speedway season, many members have also been heavily involved in fighting bushfires and supplying support for victims and their families, according to the Reverend Dr Garry Coleman (OAM).

“It has been an incredibly tough summer for so many Australians,” said Coleman.

“While the speedway season always keeps us busy, we have had many members directly and indirectly involved with the fires in all states.

“We are grateful for the ongoing support from Speedcafe.com, Lloyds Auctions, and the race fans of Australia.”

There are currently more than 50 serving MRM chaplains who receive no remuneration for their time and who willingly cover the majority of their own expenses in many instances.

This is the third monthly charity auction held in conjunction with Speedcafe.com to raise money for Motor Racing Ministries and is an extension of Lloyds Auctions’ incredible recent commitment to Bushfire relief.

The first auction of two tyres from Jamie whincup’s 2009 championship car raised $4700, and the auction of four rare Michelin posters has brought in $2061.