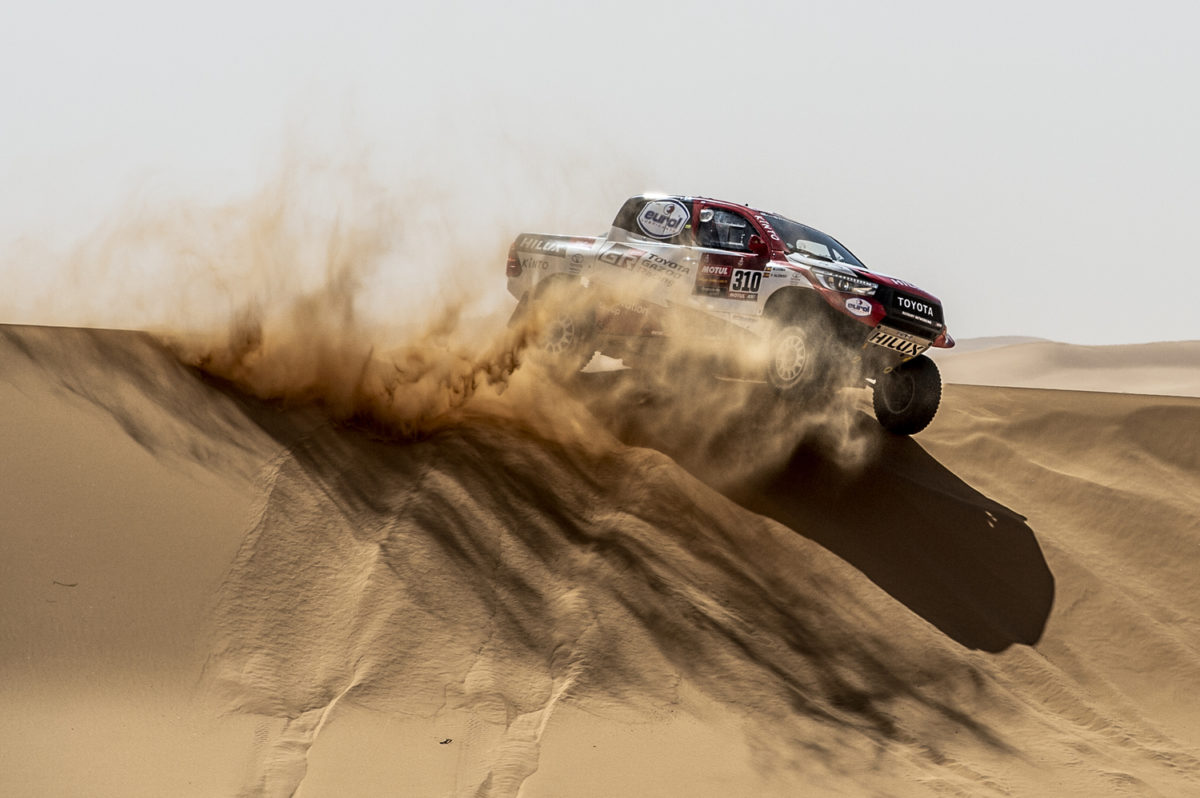 Fernando Alonso says that he has bettered any realistic goals he had ahead of his Dakar debut by finishing second on Stage 8.

The two-time world drivers’ champion was beaten only by Mathieu Serradori, the first amateur driver to win a stage in 32 years, on the 477km special stage around Wadi Al Dawasir.

As such, Alonso finished ahead of this year’s three realistic title contenders in Carlos Sainz, Nasser Al-Attiyah, and Stephane Peterhansel, each of whom have claimed multiple Dakar crowns.

He is now 13th overall, 3:10:51s behind the leading pace of Sainz, having lost 2:21:05s relative to his fellow Spaniard when he hit rock and had to patch up his factory Toyota Hilux on Stage 2.

“I’ve not just fulfilled but exceeded all kinds of personal goals I may have had before the Dakar,” said Alonso, whose only official cross-country rally outings prior had been the Lichtenburg 400 and Morocco Rally.

“In Morocco I felt comfortable but I was 15 minutes from the leaders in 250-kilometre stages.

“I didn’t know if in the Dakar I would be half an hour behind the biggest specialists, and being close to them on days like this, even ahead of them, was not in any of my sensible goals.”

Alonso had the advantage of starting behind the event’s front-runners on the road, and they were further hamstrung by not having the Bikes to follow due to the cancellation of that class’s stage.

He and co-driver Marc Coma, who is a five-time Dakar champion on two wheels, were nevertheless thrilled by the result, which came even after they suffered a puncture.

“We saw the times on the road section (after the timed special) to get to the bivouac, and the truth is that we were almost pinching each other as we barely believed that everything had gone so well,” added Alonso.

“The stage went smoothly. We had a puncture at 350km, more or less, but I don’t think it made much difference.

“For us in the team, for Marc and me in the car, these are moments of great joy, of emotion, because we know how difficult it is, what we experienced there over 470 kilometres – the dunes we passed, the scares – and then when you cross the finish line and you are among the best, it is a great joy.

“And to remember where we came from, we didn’t even know how to start the car practically.”