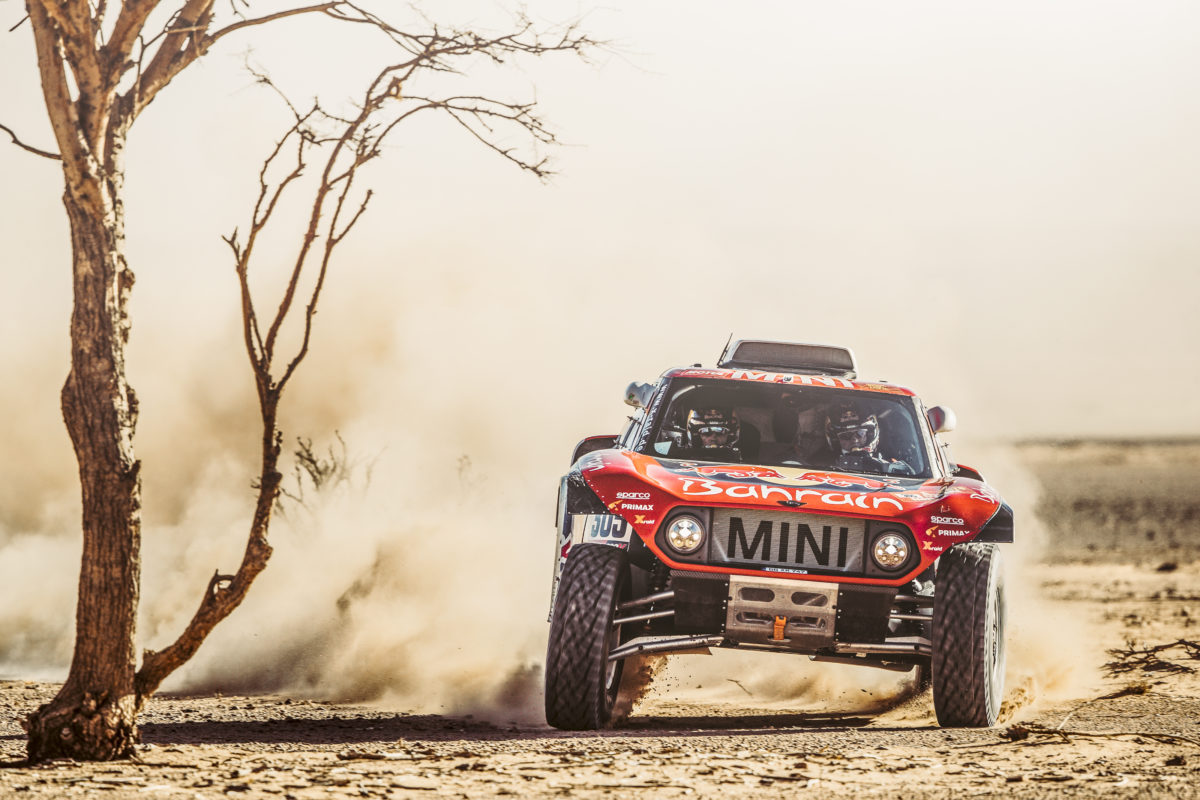 Carlos Sainz leads the 2020 Dakar Rally by a neat 10 minutes after picking up his third stage win of the event.

The X-raid John Cooper Works Buggy driver prevailed over Nasser Al-Attiyah, his nearest rival for the title, by 2:12s on the mammoth 546km seventh special stage from Riyadh to Wadi Al Dawasir.

Once again it was both X-raid buggies and the lead factory Toyota Hilux in the top three, with Stephane Peterhansel 2:53s back on the stage and now 19:13s behind team-mate Sainz in the same position overall.

Peterhansel had to open the road and sat third for most of the journey, which was the longest special stage of this year’s event.

At one point he even led Sainz on timing, and overturned a 15-second deficit to Toyota Gazoo Racing’s Bernhard ten Brinke between the final waypoints.

It was actually Sainz who had a relatively slow start before gaining the ascendancy by the Kilometre 321 waypoint and gradually gapping Al-Attiyah.

“It was quite a fast, a lot of time flat out, and some crossing dunes,” recounted Sainz.

“I caught (Peterhansel on the route), but it was very dusty in one part and I couldn’t get close, so I decided to stay behind.”

The latter continues to sit fourth overall while Orlando Terranova (X-raid Mini 4×4) is the last driver within an hour of the lead having given up another 12:04s to Sainz.

Fernando Alonso was sixth on the stage at 7:49s off the pace, one position and 2:30s ahead of Toyota Gazoo Racing team-mate Giniel De Villiers.

The latter and ten Brinke jumped Mathieu Serradori (SRT Century) to sixth and seventh respectively in the overall classification after the Frenchman got stuck on a dune early into the stage.

Alonso is 15th at 3:26:02s in arrears of the leader, with much of that margin arising due to an unfortunate crash on Stage 2.

The dominant Ignacio Casale actually lost some of his overall lead in Quads to stage winner Simon Vitse but is still up on the Frenchman by 36:43s, while Casey Currie has taken control of what has been a topsy-turvy SSV race by 32:03s.

Toby Price was one of multiple riders credited with time back for stopping to assist Paulo Goncalves, who was pronounced dead in hospital after a fall approximately halfway into the special, but the Australian still drifted further from the overall lead.

Stage 8 takes the field in a loop around Wada Al Dawasir (477km special, 716km total), although it has been cancelled for Bikes and Quads in light of the death of Goncalves after consultation with competitors.