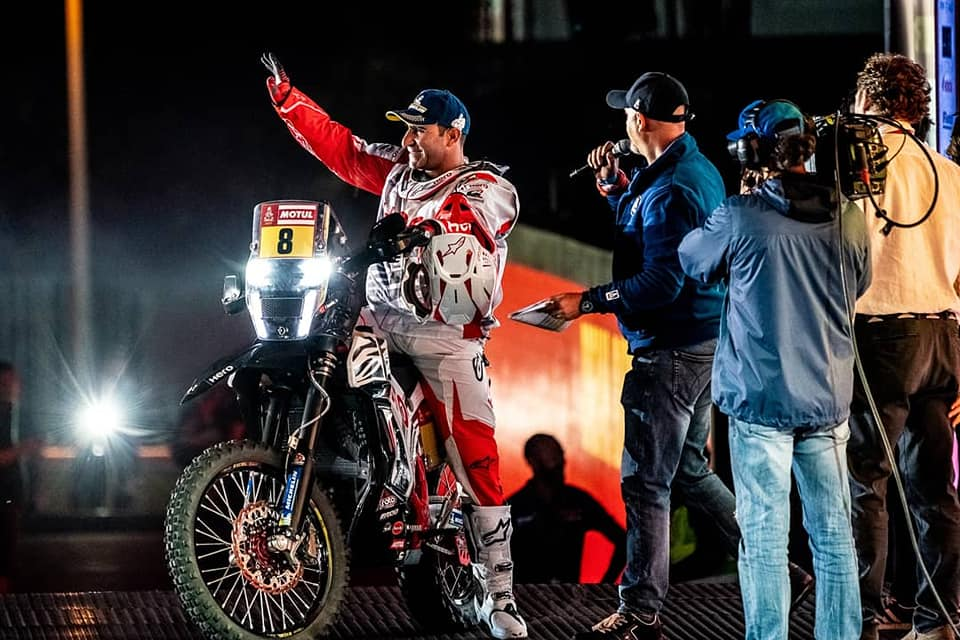 Competitors including Toby Price, who was first on the scene, have expressed their condolences following the death of motorcycle rider Paulo Goncalves during Stage 7 of the Dakar Rally.

The Portuguese rider, who was contesting his 13th Dakar, fell approximately halfway through the special stage from Riyadh to Wadi Al Dawasir and was pronounced dead after being airlifted to hospital.

While some were clear of the incident and not aware that Goncalves had gone down, Price was among those who stopped to lend assistance.

According to Dakar Rally Director David Castera, the Australian was in fact the rider who first alerted officials after the initial signal automatically triggered by the blow to Goncalves’ own bike.

“Worst day for the rally sport, Rest and ride in peace Paulo Goncalves you will be missed by many!” wrote Price on social media.

“Thoughts and prayers go out to his family and friends! This one hurts and is tough to swallow.”

‘Speedy Goncalves’ had joined Hero MotoSports Team Rally for this year’s Dakar, and the Indian outfit was understandably hit hard by the loss.

“It isn’t just a team, it is a family for us and we are devastated with the passing away of one of our members, Paulo Goncalves.

“He joined the Team in April last year and within no time became an integral part of the Hero MotoSports Team family. He will be dearly missed and always be fondly remembered by us.

“Paulo was a true champion, gentleman, reliable friend to everyone in the racing world and a role model as sportsman and personality. We extend our deepest condolences to his family and friends.”

Bikes event leader Ricky Brabec set aside thoughts about his place in the classification once he heard about the tragedy.

“On arriving we heard the news about Paulo,” explained the factory Honda rider, who was a team-mate to Goncalves last year.

“We all know that motorcycling is a dangerous sport, but today is a really sad day for the people of Cross-Country Rallies. Our thoughts are with the family.

Rally boss Castera shared in the pain not only as an administrator but also a former competitor.

“These are very difficult times,” he said.

“We are here to live the opposite – to dream, enjoy and see happy people – and now we have to live the worst of times.

“We all know that the motorcycle is dangerous. I have done five Dakars on a motorcycle and when you go out in the morning, you sometimes have a knot in your stomach, because you have no protection, you have nothing. And everyone knows that.

“Paulo was a professional who knew the risks. It is sport, this sport is dangerous and we know it.”

Speaking after finishing the stage, Quads event leader Ignacio Casale recalled, “It was a nice stage from the sporting point of view, but from the moment I saw the crash, I was unable to focus. I spent the rest of the stage thinking about it.

“The result doesn’t really matter today. I did a good stage, I’m first on GC but I don’t feel well.”

Price, Stefan Svitko, and Kevin Benavides were among those credited with the time they spent assisting Goncalves at the scene of the accident, meaning the latter was declared the stage winner.

Stage 8 for Bikes and Quads has been cancelled to allow competitors time to grieve for the 40-year-old.

“The decease of Paulo Gonçalves during today’s stage 7 between Riyadh and Wadi Al-Dawasir has left the entire Dakar, especially the bikers, in shock,” read a statement from organisers.

“Paulo, a beloved figure of the rally, was immensely respected by both veterans and less experienced competitors who admired and were inspired by him.

“After meeting the riders and making a decision together with the entire motorbike family, the organisers have decided to cancel stage 8 for the motorbikes and quads category, which was supposed to take place on a loop course around Wadi Al-Dawasir, in order to give the riders time to mourn their friend.”