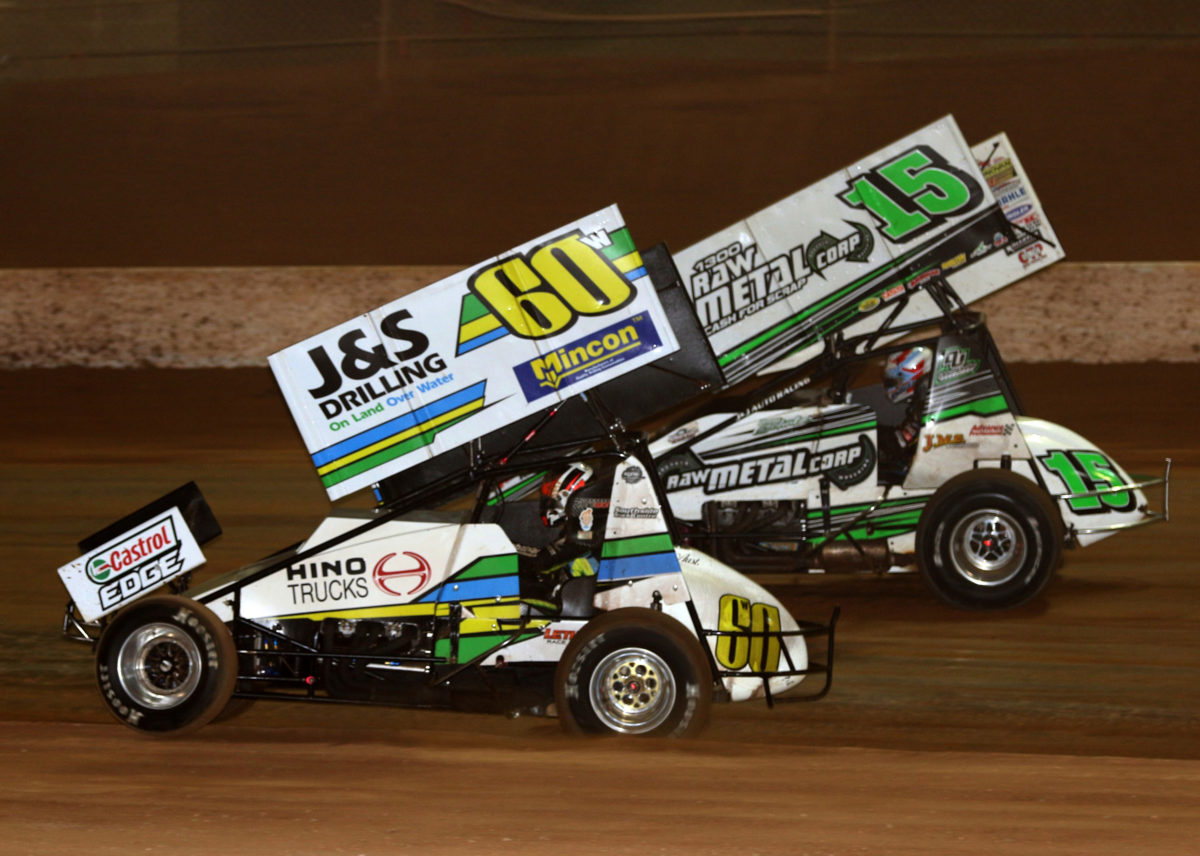 Donny Schatz going around the outside of Lockie McHugh pic: Matthew Paul Photography

Donny Schatz has continued his winning ways at Ausdeck Patios Archerfield Speedway as he claimed the first night of the Titan Garages Australian Sprintcar Open in style.

The American charged into the lead early in the 25-lap preliminary main and survived a challenge as he worked his way through traffic late in proceedings to claim his fifth win from as many starts at Archerfield this season.

Kerry Madsen claimed second from Lockie McHugh in third after a late tussle between the pair.

“It’s crazy man, that’s awesome! That’s what this game is all about,” Schatz said after claiming victory.

“I feel like us coming over here pushes them, and they start pushing us and that’s what the world revolves around in dirt track racing.

“He (McHugh) did a good job. The track was tricky. There was a top and bottom and you had to use the whole thing and he stayed right there.

“These young guys are catching up and they know what to do.

“Hopefully they don’t learn too many tricks and experience prevails, but that will probably change one day.”

It was far from straightforward for Schatz, who qualified mid-pack and had to work his way forward during the heats.

Victory in his first and second in the next saw him pick up enough points to start from the second row in the final, behind pole-sitter McHugh and Jock Goodyer on the front row, and alongside Kerry Madsen.

Schatz quickly moved to second behind McHugh as the final began, fending off Madsen before taking the lead on Lap 9.

He then drove away from the pack until delayed by traffic approaching the final third of the race, only to clear off once again.

That left Madsen and McHugh to squabble over second place while James McFadden maintained a watching brief in fourth.

Madsen gained the upper hand with two laps to go, resisting a late challenge from McHugh on the final lap to take second.

Fourth for McFadden sees him maintain the QSS World Series lead over Madsen by 63 points.

The Australian Open concludes at Archerfield this evening with a 50-lap final.