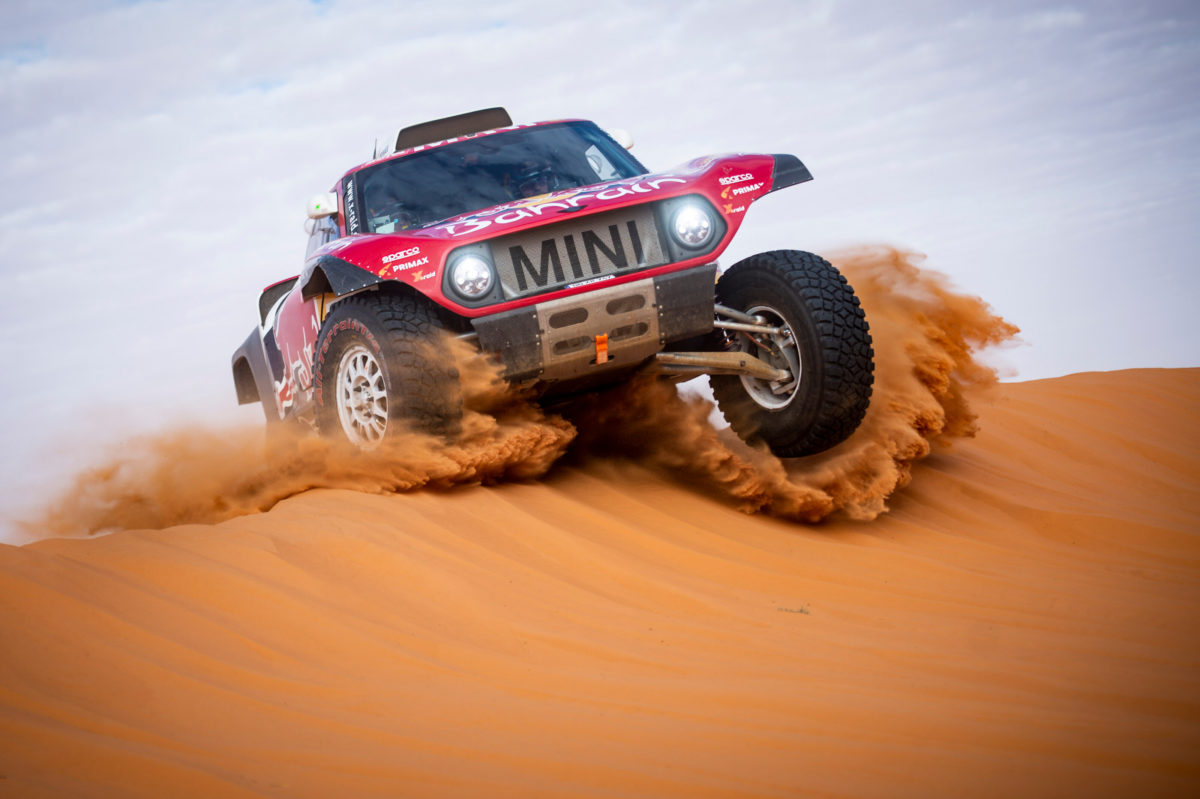 Stephane Peterhansel has won Stage 6 of the Dakar Rally in Cars but X-raid John Cooper Works team-mate Carlos Sainz edged further clear at the top of the overall classification.

Sainz opened the road on the sandy 477km special from Ha’il to Riyadh but kept touch with Peterhansel and even led the Frenchman, although by only two seconds, at one waypoint.

In the end, it was Peterhansel by 1:33s and Sainz second in the other X-raid buggy but, more importantly, the latter was almost two minutes faster than Toyota Gazoo Racing’s Nasser Al-Attiyah.

“I don’t know what is happening. Probably I lost a little bit of time on the last part,” said Sainz.

“Today I think opening the road again wasn’t easy so I’m happy to arrive here in this position.

“It was difficult. I need the rest day now.”

Peterhansel, who is third overall at 16:20s behind Sainz, said that the concentration was the most difficult part of the day.

“It was fast but sometimes we crossed some dunes, so it was slow, fast, slow, fast… But the biggest problem for me is that with these high speeds you need to be really concentrated a lot.

“You are not physically tired but it’s more mentally tiring. When we are at really high speed we need to be really focused.”

Al-Attiyah, who was third for the stage, believes that his Hilux is not a match for the JCW buggies in the terrain.

“I am disappointed because we are really going at the maximum and the Mini buggy is too fast compared to a 4×4,” he said.

“But what can we do? This is a new Dakar and I think we need to do a really good job.

“We’ve finished the first week without any problems and I’m quite happy. We’ll see next week.

“It will be tougher. I think there will be more dunes, but it’s still a long way.”

Yazeed Al Rajhi (Overdrive Toyota) was once again the best of the rest to retain fourth overall, one position ahead of Orlando Terranova (X-raid Mini 4×4).

There will be a new champion in Trucks after Eduard Nikolaev, who only managed to complete Stage 5 in the early hours of the following morning, finally relented due to another mechanical drama, 33km into Stage 6.

A Kamaz driver still leads, however, with Andrey Karginov winning the stage from team-mate Anton Shibalov, who remains second overall.

Simon Vitse won the Quads stage and moved to second overall, albeit 38:14s behind Ignacio Casale, while Francisco Lopez Contardo leads in SSV.

Toby Price lost over a quarter of an hour due to an unfavourable road position and a tyre problem, falling to third overall in Bikes.

Saturday (local time) is a rest day before a massive 546km special from Riyadh to Wadi Al Dawasir.