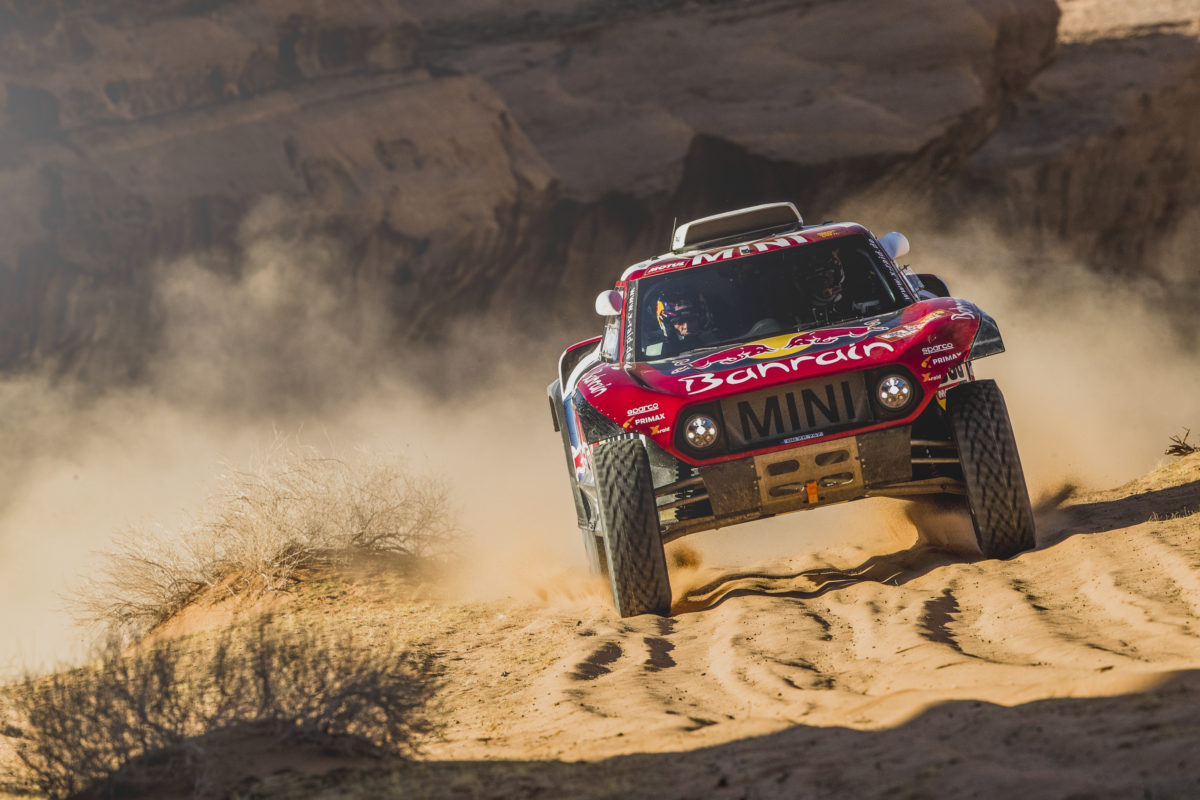 Carlos Sainz has extended his lead in the Cars class of Dakar 2020, recovering from a puncture to win Stage 5 by almost three minutes.

The Spaniard is now 5:59s up on 2019 champion Nasser Al-Attiyah in the overall classification, and 17:53s to the good of fellow X-raid JCW Buggy driver, Stephane Peterhansel.

As had become apparent a day earlier, the event is now a race in three between the aforementioned drivers, who finished in the same positions on the 353km special from Al’Ula to Ha’il.

It looked as though Al-Attiyah would make further inroads on Sainz when the latter suffered a puncture early into Stage 5, but the 2018 champion fought to grow his advantage.

“We gained three minutes and pushed really hard at the end,” said Sainz.

“I’m very happy because the car is working well. I had a flat tyre at the start of the special, but I managed to make up the time.

“I’m doing the best I can, but tomorrow when we open the route, maybe it will be completely different.”

Al-Attiyah led midway through the special and was 1:56s behind Sainz to the penultimate waypoint, but lost exactly another minute on the run to the end of the stage.

The three-time champion revealed that he too had incurred a puncture, near the end of the day.

“It was a good stage for us, but the route was better for buggies rather than a 4×4, but we did what was necessary to avoid any problems,” said the factory Toyota Hilux driver.

“We had a flat tyre five kilometres before the finish, but we preferred to carry on without changing the wheel.”

Peterhansel made it three from three in terms of punctures for the big guns of Dakar 2020, finishing the stage 6:11s slower than team-mate Sainz.

Continuing the stage/overall positional pattern, Yazeed Al Rajhi (Overdrive Toyota) and Orlando Terranova (X-raid Mini 4×4) retain fourth and fifth respectively having finished in those same positions on the day, with both now more than half an hour adrift of Sainz.

In Trucks, Kamaz’s Andrey Karginov enjoys an increased overall lead of 14:53s while team-mate Anton Shibalov is now second, as another Kamaz entry in the #501 truck of Dmitry Sotnikov won the stage.

Their defending champion Eduard Nikolaev, however, was still not showing as a finisher at time of writing and would appear to be well and truly out of title contention now.

Romain Dutu was fastest on the day in Quads, which Ignacio Casale continues to lead overall, by 31:37s.

Cyril Despres topped the stage in SSV, although he is out of the overall running after a DNF earlier in the week and is continuing in the ‘Dakar Experience’ section, with Sergei Kariakin heading the class.

Toby Price became the first multiple stage winner of 2020 in the Bikes, moving to second in the general classification.

Stage 6 from Ha’il to Riyadh will be the longest yet in total kilometres and features 477km of special stage running, the equal longest of the entire event.