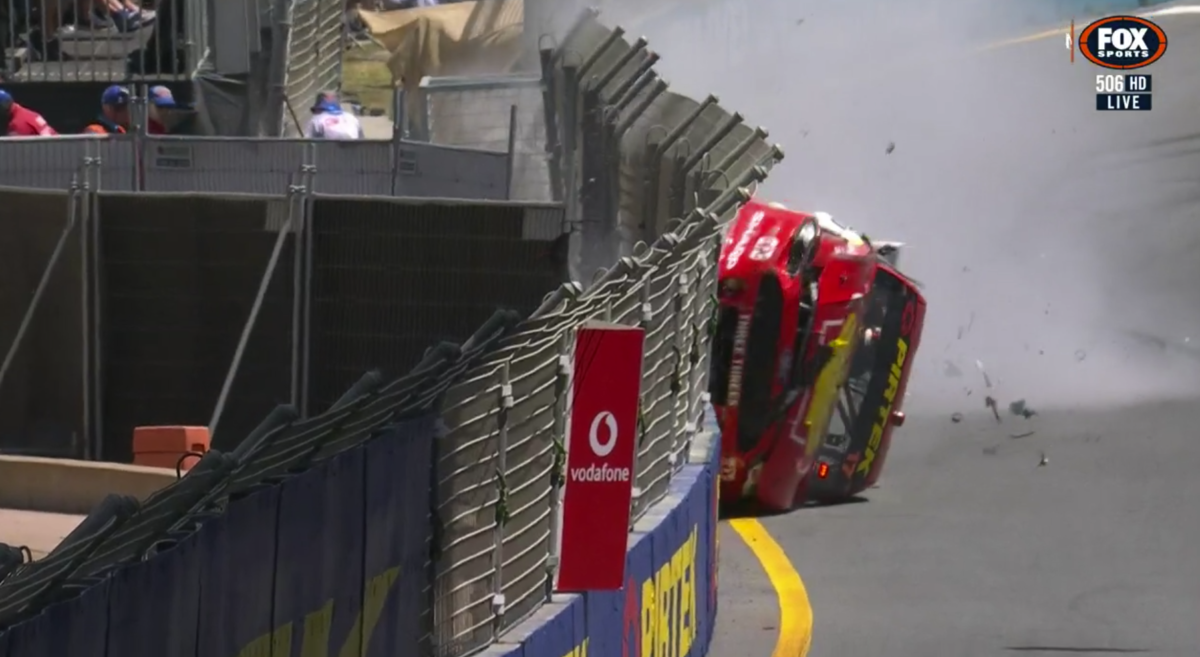 An investigation by Motorsport Australia has found that all reasonable precautions were in place to prevent a shock absorber from Scott McLaughlin’s DJR Team Penske Mustang from flying onto a nearby balcony at last year’s Gold Coast 600.

McLaughlin crashed during qualifying for Sunday’s race, with a shock absorber landing on a nearby balcony.

Speedcafe.com first reported the incident which was subsequently cited in a report confirming the investigation.

According to Motorsport Australia CEO Eugene Arocca the investigation deemed that there was no way the incident could have been predicted or reasonably predicted, and that all appropriate measures had been put in place, leaving him to describe it as a ‘freak incident’.

“As someone who knows about risk (management from) past legal experience, you can only do what is reasonable in the circumstances to protect or eliminate the risk of something happening.”

“The only way we could have protected this spring from getting off and where it went would be to completely enclose the track.”

Arocca added that such a move could not be considered reasonable, and suggesting even increasing the fencing would have made scant difference.

“If you raised the fences by another 10 metres, the chances are that the spring would have still got over the top of it,” he said.

“There is a point in law and risk management that says you need to act rationally and reasonably in response to any risk and measure the likelihood of that risk.

“We do put this down as a freak incident.”

Safety receives significant focus from both Supercars and Motorsport Australia, with great strides made year on year.

In recent years leg protection has been introduced to prevent a repeat of the sorts of injuries sustained by Chaz Mostert at Bathurst in 2015.

Elsewhere, SuperUtes responded with strengthened wheel tethers following an incident at Queensland Raceway when a wheel broke free from Mick Siders’ car in 2018.

Work on improving safety is an ever present, with Arocca revealing Motorsport Australia is currently working with Supercars to identify and implement further safety measures.

“We are still talking and working with Supercars about whether there’s something that we’re not aware of worldwide that could be implemented,” he revealed, specifically referring to shock absorbers.

“We’ve investigated it, our Risk Committee certainly called for a report.

“We’re getting some information from overseas, particularly in NASCAR, seeing what they are looking at and what they’re working on in this area.

“But at the moment we’re putting it down as being an extremely unusual incident that we just need to be mindful of and continue to find ways to try to think about what could happen in the future.”

Despite the incident, and the concession that it’s impossible to predict or prevent every possible eventuality, Arocca believes street circuits deserve a place on the motorsport calendar.

Supercars currently visits half a dozen, starting with Adelaide and followed by Albert Park, Townsville, Bathurst, Gold Coast, and Newcastle.

“Street circuits present their own unique circumstances,” he explained.

“They’re bolt-up, bolt-down type of arrangements, but it is the most effective way of bringing motor sport to the masses.

“The popularity of Gold Coast, and Newcastle, and other street circuits like Townsville, is indisputable.

“They are the biggest crowd pullers, you look at Adelaide of course, which is at the start of the season.

“So there’s a balancing act, but I don’t believe there’s anything that is outstandingly obvious presenting a risk that would justify not conducting street circuits.

“It’s just impossible to predict what could happen in motorsport, and people are warned about this.

“From my point of view, it is a reality of street circuits that you balance the need to bring the sport to the people, but still continue to always try your best to manage those risks.

“The undeniable experience that I’ve had over the last seven years is that street circuits don’t pose any greater of risk in my opinion, than a normal circuit,” he added.

“Spectators congregate on (permanent) circuits and on street circuits, and at rallies, and the risk to a large degree is no different from one to the other because of the sort of unpredictable nature of motorsport.”