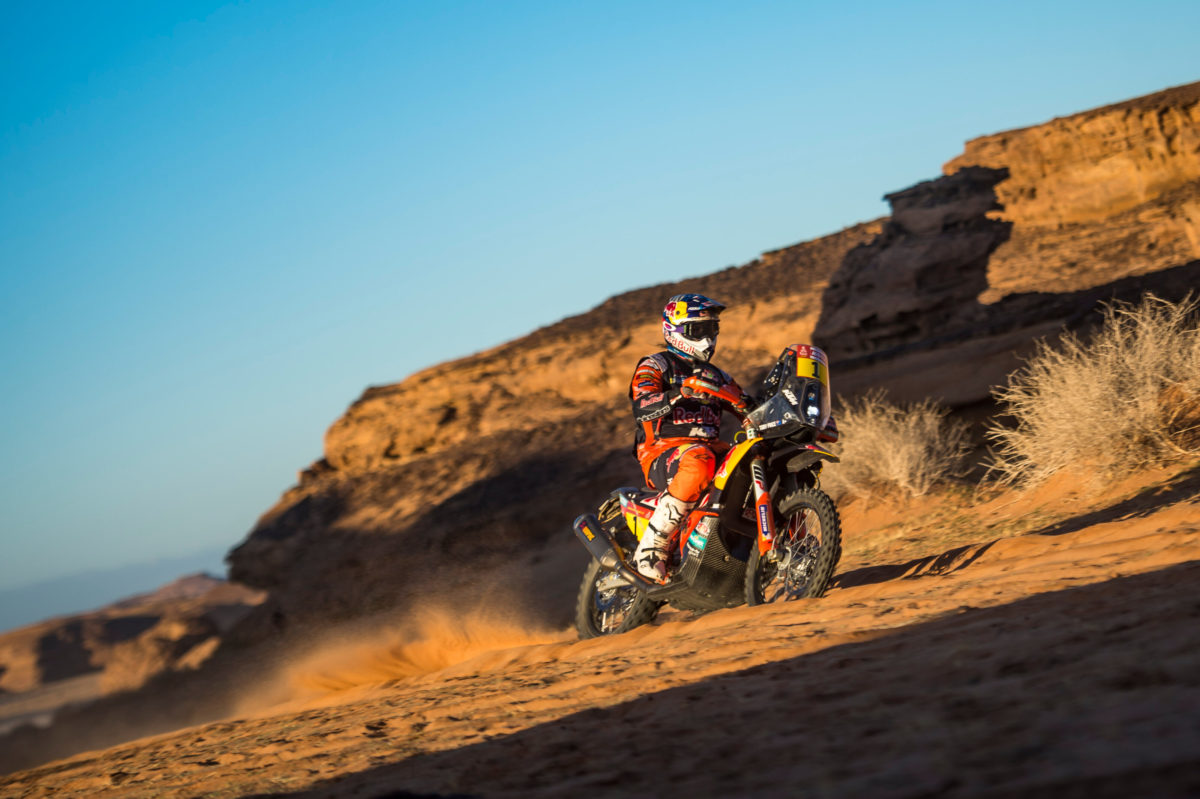 Toby Price has won Stage 5 of the Dakar Rally while KTM team-mate and 2017 Bikes champion Sam Sunderland is now out of the event.

Price at one point had almost three minutes over the field on the 353km special which made up the journey from Al-‘Ula to Ha’il and ultimately won the day by 1:12s over Rockstar Energy Husqvarna’s Pablo Quintanilla.

Monster Energy Honda’s Ricky Brabec continues to lead the event, but Price gained just over three minutes on the American and now holds second overall at 9:06s in arrears.

“I pushed hard at the start, made some good ways and by then I caught up with the Honda boys,” said Price.

“Ricky and them were in front, but, yeah, it’s been a good stage.

“It’s actually the first time I’ve ridden with a whole big group, so it was quite enjoyable, but at the end of the day they are competitive so we need to stay in front of them.

“We’re happy with the day and we’ll see how Day 6 goes now… I think that’s what we’re up to… I’m starting to lose count of it all.”

Red Bull KTM’s Sunderland became the third big name to exit Dakar 2020 in as many days when he crashed at the 182km mark.

“He has an injury in his back – some fractures, but small ones, with no compressions – so surgery is not necessary.

“He also has an injury in his shoulder blade, but nothing serious. We know it’s Dakar, this can happen, and now we need to keep pushing with the rest of our team.”

Andrew Short made it factory Husqvarnas in second and third on Stage 5 and while he is 12th overall, Quintanilla now sits fourth overall at 16:01s off the pace.

Brabec was fourth for the day, one position ahead of Red Bull KTM’s Matthias Walkner, but the Austrian who was crowned Dakar champion in 2018 has now drifted to more than half an hour away from the top of the general classification.

Having been two-and-a-half minutes behind Brabec, his team-mate, after Day 4, Kevin Benavides also lost ground and is now 11:32s in arrears in third overall.

“Today was a really hard day physically,” said the Argentine.

“We spent a lot of time off-piste, so it was really, really hard.

“I made a navigation mistake at the beginning, but afterwards, I recovered the time.

“I caught up with Nacho (Jose Ignacio Cornejo Florimo) and Ricky and we arrived at the finish all together. I started in second today, so I’ll lose time for sure, but it was a good stage.”

Cornejo is now fifth overall at 20 minutes behind, with the fourth factory Honda rider, Joan Barreda Bort, occupying seventh in the general classification.

“Today’s stage was tough as we had to open the track,” said Cornejo, who won Stage 4.

“We knew it was the first stage of the rally with more sand. It was a very physically demanding day having so many kilometres of sand, camel grass and some dunes.

“I am happy as I opened the track until the end of the special where the group reached me. It was a positive day as I did not waste as much time opening the track as I could have done.

“I have a very good starting position for tomorrow’s stage.”

Stage 6 from Ha’il to Riyadh will be the longest of the event to date at a total of 830km, including a 477km special stage.