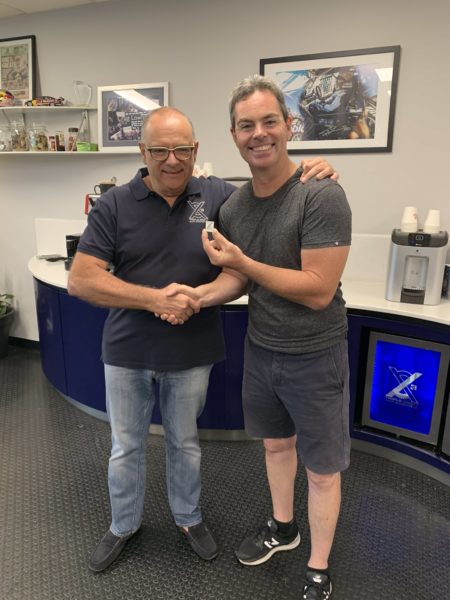 Craig Lowndes has been presented with a commemorative pin by Triple Eight Race Engineering boss Roland Dane in recognition of his 15 years of service with the squad.

Lowndes joined the team for the 2005 season, securing its first win at Eastern Creek (as it was then known).

He’s since been an ever presented, tasting champagne as recently as his last outing at Sandown.

“Proud to be given a Triple Eight Race Engineering 15 year pin by Roland today,” Lowndes announced on social media.

“Which also marks the longest driver and team relationship in Supercars.

Though he hung up the helmet from full-time competition at the end of 2018, the veteran spent 2019 as co-driver to Jamie Whincup during the Pirtek Enduro Cup.

Together they won on the streets of Surfers Paradise after finishing fourth at the Supercheap Auto Bathurst 1000.

The duo then capped the year off with victory in the Sandown 500, making for a total of three wins (including the Sandown qualifying race) in five starts in 2019 for Lowndes.

During his 15 years of service, the seven time Bathurst winner enjoyed a remarkable run of results, finishing second in the championship on six occasions, and third in the 2007 championship.

Aside from 2017, when he finished 10th, he finished fourth in every other season in which he was a full-time driver.

Lowndes is set to continue as co-driver again with the squad for 2020.

Proud to be given a @tripleeightaus 15 year pin by Roland today. Which also marks the longest Driver and Team relationship in @supercars It’s gone fast but I still remember our first win at SMP in 2005. Bring on 2020. 👍😄 pic.twitter.com/76oacsGkEn