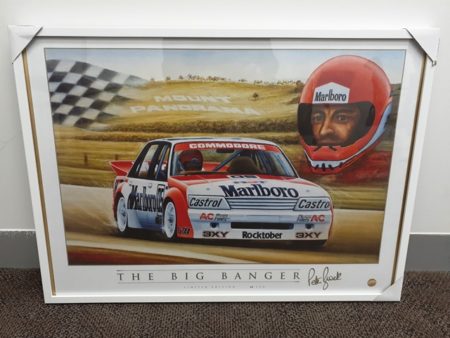 A collection of Peter Brock memorabilia heads a list of motorsport items added to the Lloyds Auctions charity event for bushfire relief.

There are five unique Brock pieces as well as a copy of the 50th Anniversary HDT Archive Collection which is a 350 page 10kg coffee table book which is the ultimate collector’s item for HDT and automotive enthusiasts.

Formula 1 world champion Alan Jones has also donated a pair of signed race gloves and an official FIA shirt which he wore during his time as an FIA steward.

“Lloyds Auctions are doing a great job with the charity auction for bushfire relief and I encouraged everyone to get behind it by buying the items up for grabs or donating cool stuff, which can be turned into cash,” said Jones.

“The great thing is that 100 percent of everything raised goes straight to the organisations that need it.”

The editions are 571-575 of 600 and come signed by both Johnson and Bowe and with a certificate of authenticity.

Fans can bid directly on the items by clicking here.