Motorsport is the ultimate team game masquerading as an individual sport. It can be easily forgotten that every outing on track is the result of a myriad of steps and procedures carried out by a network of hard working personnel.

Speedcafe.com was given behind the scenes access to DJR Team Penske’s headquarters to understand how it builds and prepares its Ford Mustangs for success on the track.

To field two Mustangs in the Supercars Championship is the job of 45 staff based out of the team’s Stapylton workshop. Cars from the team’s past feature in the reception

The facility opened its doors in 1998 some 16 years prior to American racing giant Roger Penske buying a controlling stake in Dick Johnson Racing in 2014.

Penske’s influence has been the catalyst for a turnaround in the team’s fortunes on track while the successful Team Penske formula is visible throughout the squad’s workshop.

Inside the front doors offers a glimpse into the history of the team with cabinets full of memorabilia flanked by a line-up of famous vehicles, including one of Dick Johnson’s legendary Shell Ford Sierras amongst a Team Penske IndyCar and an ex-Joey Logano Penske NASCAR.

While fans can enjoy the displays situated in the area open to the public, beyond a second set of double doors away from prying eyes is the main workshop.

The main workshop is an expansive open area that is the central hub for the whole operation connected to the several sub departments located adjacent and on the upper floor.

Here there are three bays where the race cars are housed to be worked on by the crew. It is here where the cars are stripped and rebuilt in between race meetings.

Three mechanics are assigned to each chassis with two travelling to each race meeting, while the third operates solely in the workshop.

The cars are stripped of their engines, suspension, brakes, and gearboxes after each race, with the components transferred to their respective departments for rebuilding/refreshing.

One aspect that is most noticeable here and replicated throughout the facility is a sense of order and cleanliness; there is not a speck of dirt or a tool out of place.

Such is the focus on a pristine image, the workshop harbours its own laundry department where the entire workforce’s attire is dry cleaned in-house. One of the many offshoots connected to the main workshop is the damper department where personnel are dedicated to rebuilding and preparing shocks for the race cars. Springs are also rated in this area.

Countless dampers and springs are currently stored in this area.

This department will remain a crucial part of the operation although it is set for a shake-up in 2020 thanks to the introduction of sealed control dampers.

While the preparation of dampers will remain an important role, the engineer, which has specialised in this department for a few years now, will now move into a data engineering role alongside the damper/suspension work. Adjacent to the damper room is sub assembly, another vital part of the process required to prepare the cars for competition.

Three engineers work in this section rebuilding all mechanical components on the car and used by the team except engines, which are rebuilt and refurbished at Mostech Race Engines, a stone’s throw from the workshop.

This is one of the busiest departments in the workshop with the team tasked to rebuild and prepare transaxles, steering racks, brakes, starter motors and even rattle guns used by the crew in pit stops.

This department is massively important to ensure parts are specced correctly, within their useful lifespan and are ready to be installed into the cars.

The squad aims to have fresh parts ready to install when the cars return from a race weekend to speed up the rebuild process. 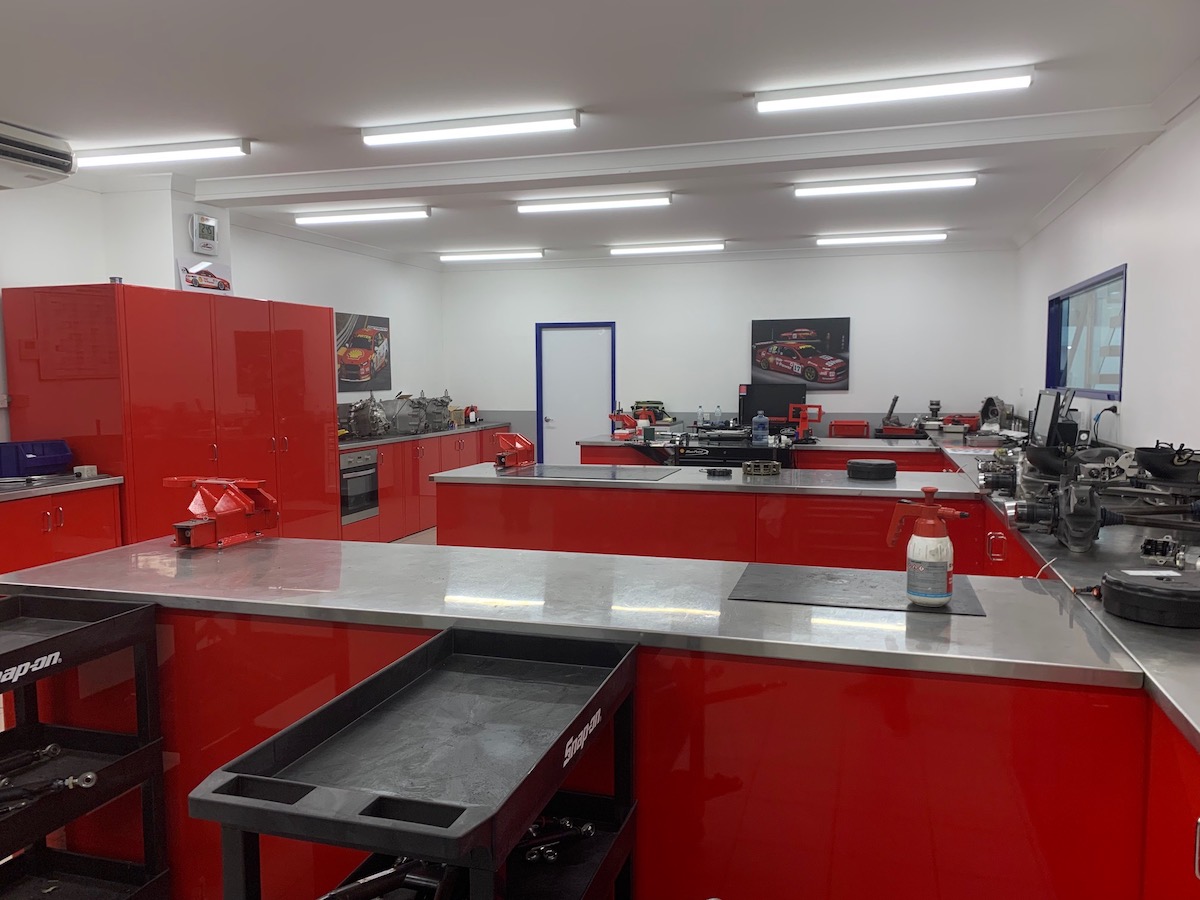 This is where most mechanical items are serviced and rebuilt

The machine shop is a beating heart of the operation where designers’ ideas are brought to life.

Virtually anything the engineers sketch is created in this department using a suite of state of the art HAAS CNC machines, operated by three members of staff.

These machines are extremely valuable given their ability to forge anything from a simple bracket to suspension uprights. Should the team be required to replace one of the machines, it would cost in the region of $750,000.

In addition to its machine shop, the team has recently acquired two 3D printers to assist with its construction of smaller, minor componentry.

This technology has allowed the engineers to create prototypes quickly and cost-effectively. The team now produces several parts used in the cabin of the cars using 3D printing. One of the team’s Haas CNC machines in action

If it needs to be bent, cut, shaped or welded then it happens in the fabrication department.

Through a season the department manned by two operators is kept busy given the regular need for components to be built or repaired.

In the below image, head fabricator Chris Wilson is working on chassis rail extensions. These parts are designed to crush on impact when involved in a crash, absorbing energy and hopefully allowing the chassis to remain straight. 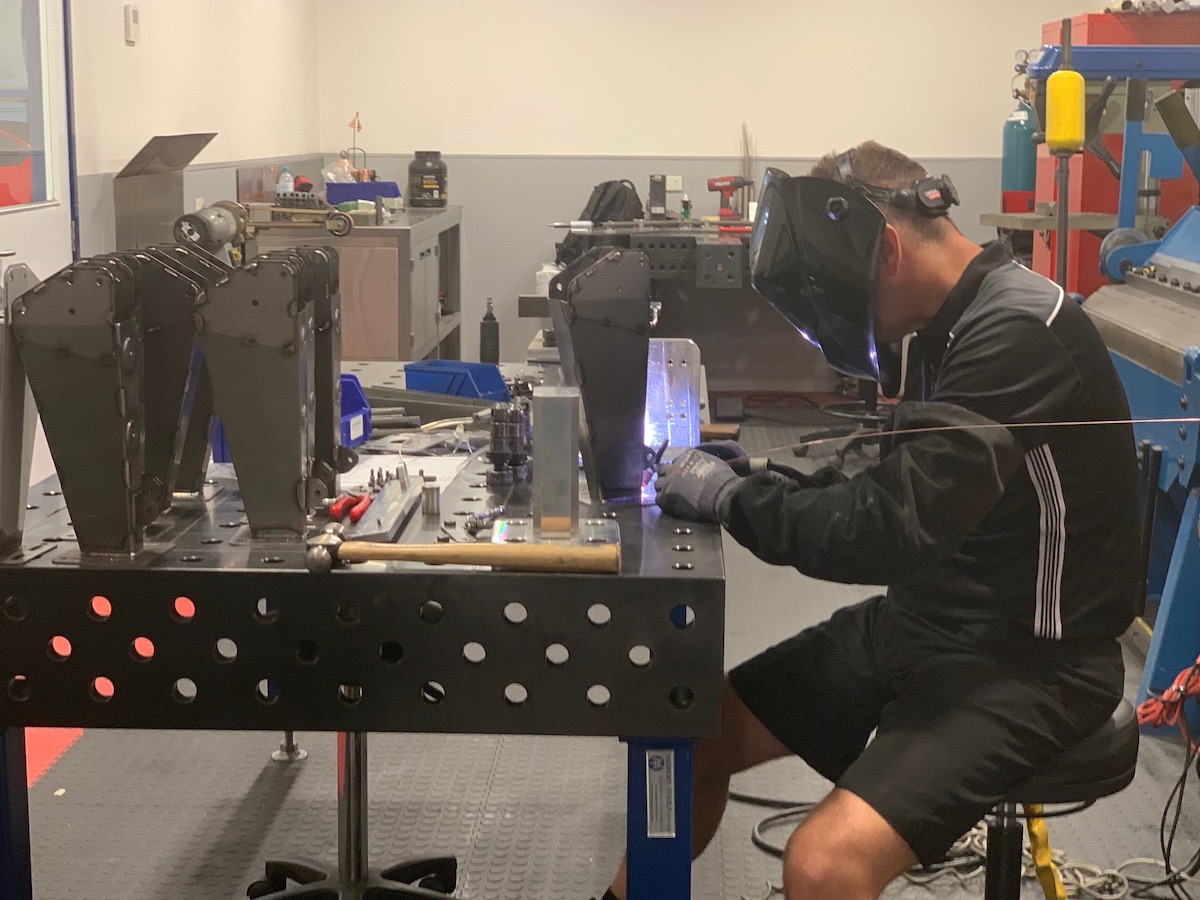 The lower level of the facility is completed by the panel and paint department, a vital section of the operation.

This is where all of the panels are prepped and painted for the cars.

Composite panels including the front bars are created while used parts are also sanded down, repaired and repainted in the paint booth, for re-use.

Unless involved in a crash, these parts can be re-used again and again. Even when damaged, they can often be repaired and put back into service. The squad has around 12 front splitters, and a few sets of doors for each car.

The department, run by three personnel, expanded in 2019 with the team adding a new master paint booth.

In the image below Fabian Coulthard’s stripped chassis is being repainted.

Adjacent to this section is a storeroom where the team houses its state of the art Simworx full motion simulator that is regularly used by drivers to sharpen their skills. Front bars in the various stages of preparation 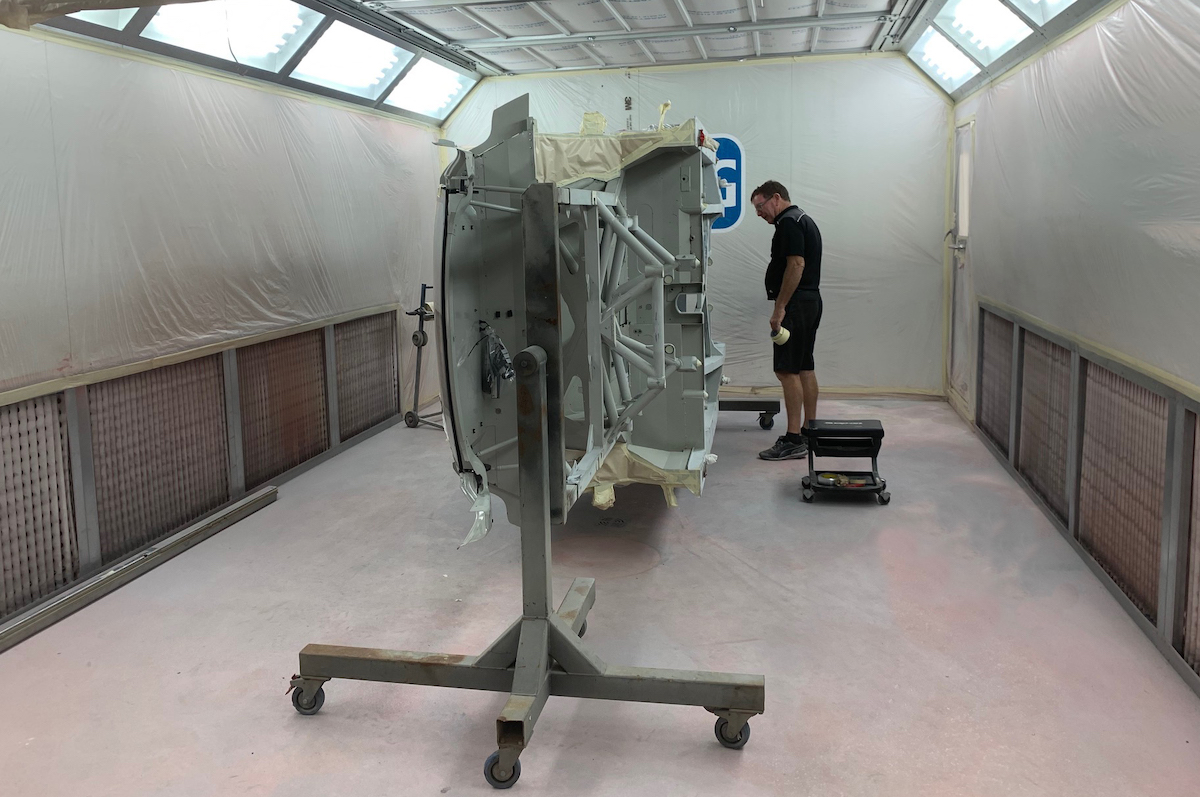 Heading upwards onto the second floor overlooking the main workshop is the team’s sticker/decal department.

Here, one large printer creates all of the stickers and wraps required for the cars drawn by its in-house sign-writer.

All of the team’s decals/stickers for commercial use are also created here.

Stocks are kept at a healthy level with a supply of stickers and wraps taken to each event. Here is where all the wraps, stickers and decals are created Storing tyres is a requirement for all Supercars teams and DJR Team Penske is no different.

Also on its upper deck is a tyre storage room for rubber it uses in practice and for testing.

The room is temperature controlled to reduce degradation. If tyres are maintained at a set temperature, and kept away from UV light then they will last longer than otherwise exposed to higher temps and regular sunlight.

Next year will see the team store less rubber with the championship abolishing tyre banks as part of new regulations.

Key to the development of any race team is the design/engineering office.

Led by Ludo Lacroix and Nick Hughes, this is from where the team’s on-track performance is driven.

The development of new parts, vehicle set-ups, the team’s simulator program and much more are orchestrated from here.

Designs for parts are then communicated to the machine shop and other departments for manufacturing to commence. Moving on from the engineering department and you will find a fully functioning gym where drivers and team members can train.

This facility has been recently upgraded with new equipment, including treadmills, cycling machines and apparatus for weight training. 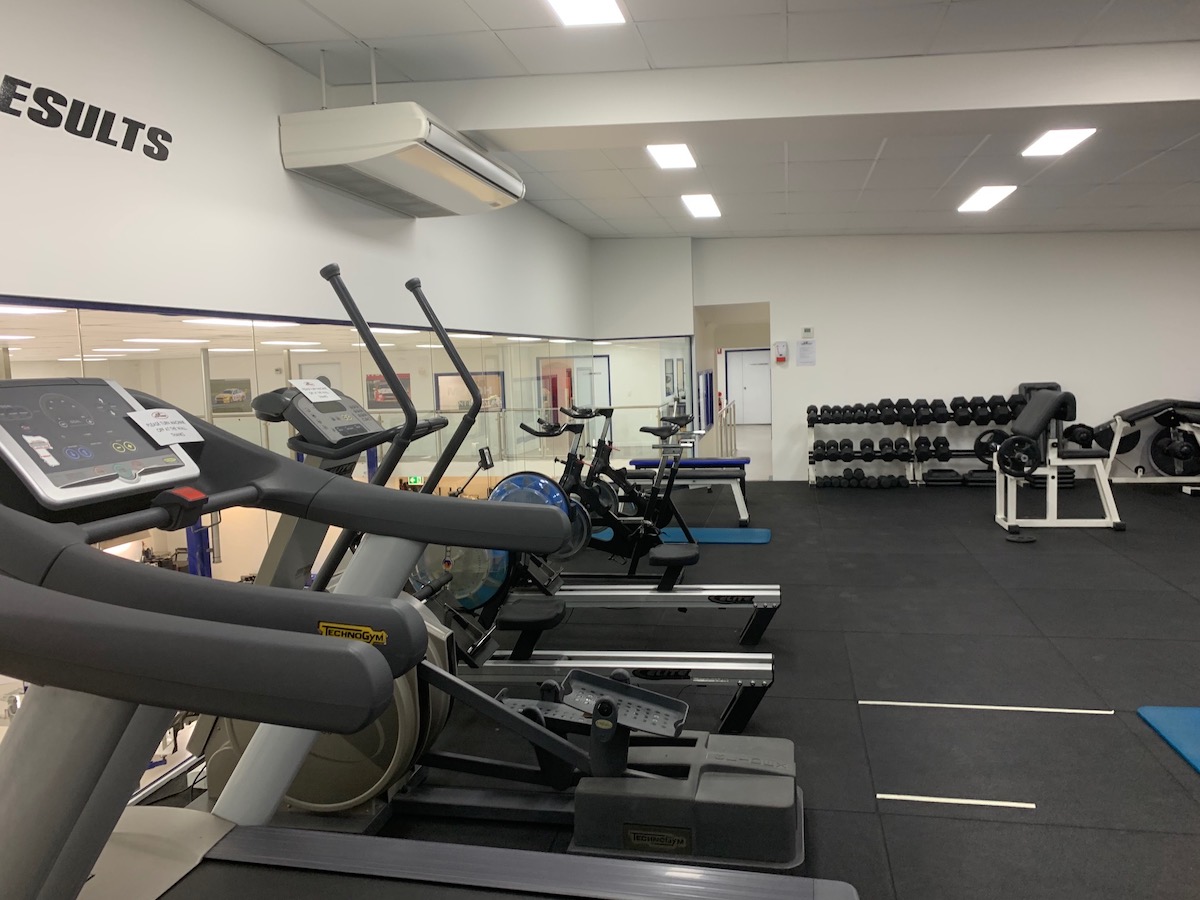 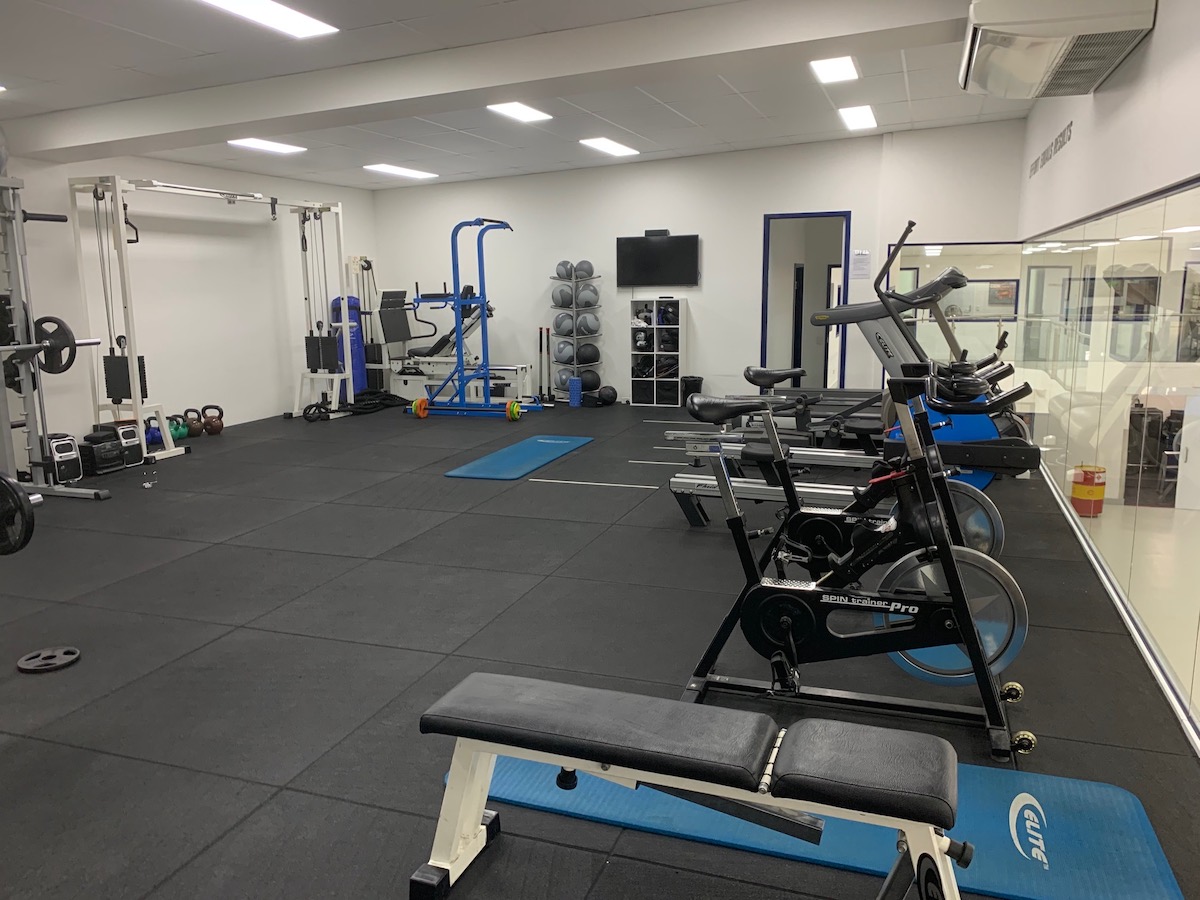 Completing the tour of the workshop is the commercial, media and management offices.

Here, the squad’s media, promotional and business activities are managed.

It takes all of these departments working in unison around the clock for DJR Team Penske to prepare its race cars for competition.