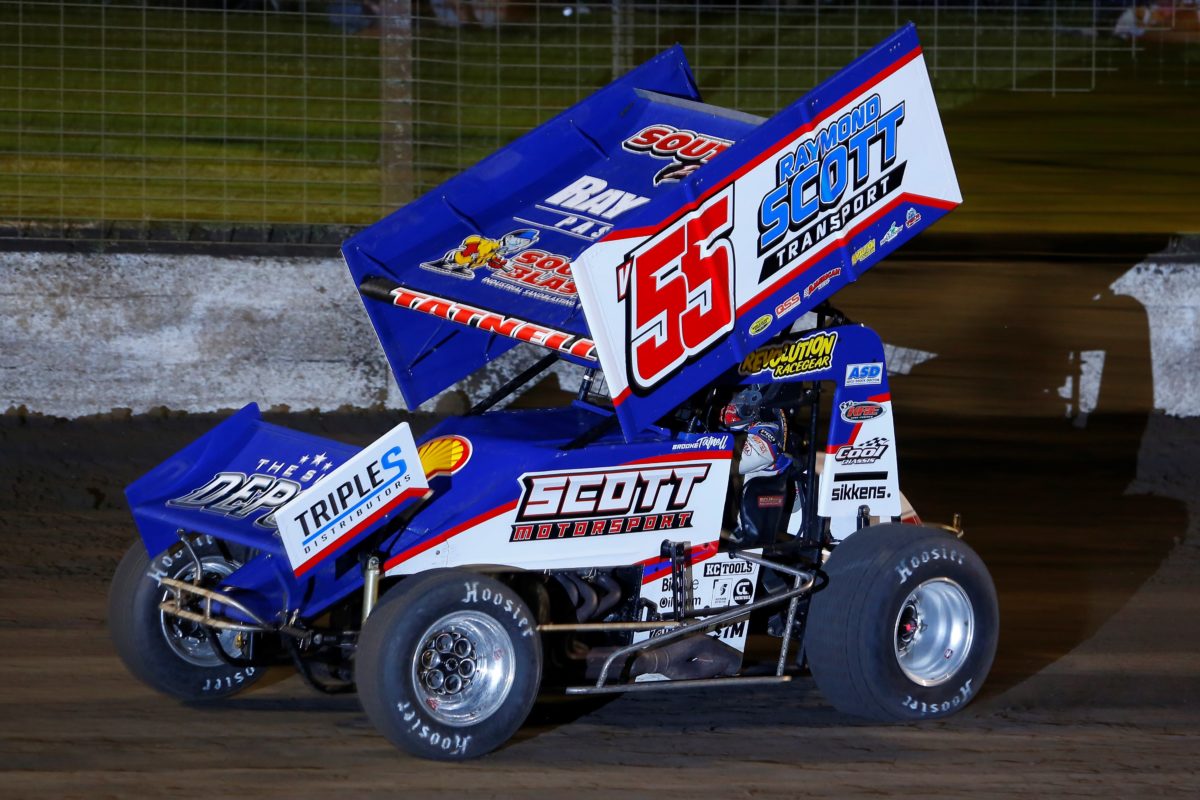 Brooke Tatnell made his return to QSS World Series Sprintcars victory lane in Round 2 at Mount Gambier after Jock Goodyer was the innocent victim of a crash while leading.

Tatnell took over top spot with that incident and did not relinquish it, while James McFadden claimed second and Kerry Madsen finished third.

It was a low-key beginning to proceedings for Tatnell when he qualified 14th in a 39-car field but he made the shootouts with a second and a sixth in the heat races.

The nine-time World Series champion earned fourth on the grid for the 35-lap main event, which Goodyer started from first position ahead of McFadden and Brock Hallett.

Goodyer led the field away as Tatnell quickly jumped to second spot, from McFadden and Madsen, but the race was neutralised after a lap due to a Turn 3 incident which accounted for Glen Sutherland, Ricky Maiolo and Jye O’Keeffe.

Again it was Goodyer pulling away when the race restarted, only to be left with nowhere to go when another clash unfolded at Turn 3.

Peter Doukas, Matt Egel, and Lucas Wolfe were involved in the incident which took place on their third lap, and so too was Goodyer when he ploughed into the bunch of cars.

Tatnell became the race leader and although McFadden challenged him, the #V55 had too much exit speed at either end of the oval.

McFadden therefore had to settle for second and Madsen was third, having started sixth owing to an incident with Rusty Hickman in his second heat and subsequently missing the shootout.

Tatnell, however, had a 77th World Series win and his first since becoming a contracted driver again this season.

“This win couldn’t have happened at a better place for the Ray Scott Transport team in their hometown,” he said.

“This is their first World Series win and I’m just rapt to have been able to get it for them, especially here at Mount Gambier.

“Ray Scott was a big fan of my dad and he’s all about family, so to do this with my family here for a family-based team is just awesome.”

Cory Eliason charged from 16th to fourth, Brock Hallett finished fifth, Jack Lee was sixth, and Dave Murcott came all the way from 20th to seventh.

Rounding out the top 10 were Grant Anderson, Jake Tranter, and Jacob Smith.

Madsen continues to lead the series on 699 points, ahead of Hallett on 684 and Tatnell on 673, with Round 3 tonight at Warrnambool’s Sungold Stadium.

Previous Story Hallett pulls off big upset in WSS Round 1