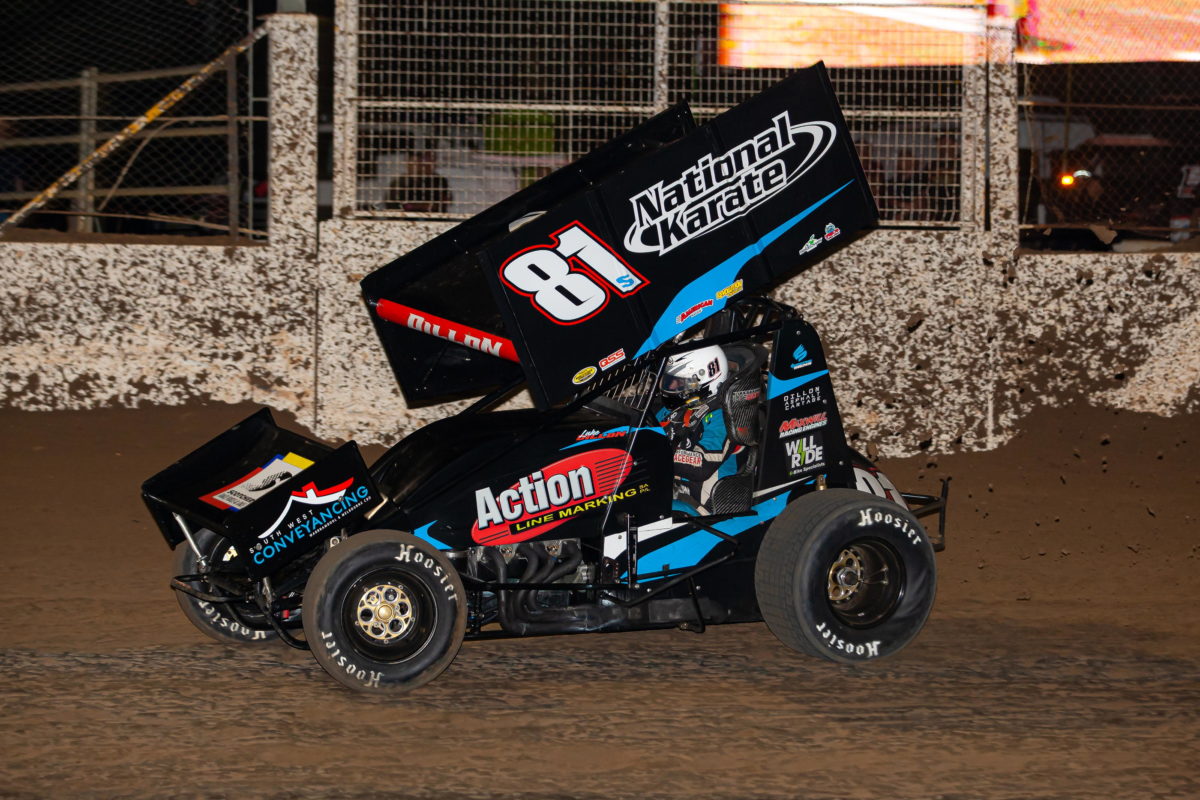 Luke Dillon has taken out the Preliminary Main Event of Round 1 of the 2019/20 Queensland Speedway Spares World Series Sprintcars at Murray Bridge Speedway.

The South Australian had a conservative run through his heats, in which he finished fifth and fourth, but those results still saw him qualify on pole for the 25-lap preliminary feature alongside Californian, Cory Eliason.

Dillon led early on even as Eliason tried every angle to unseat him, with Kerry Madsen and Matt Egel also attempting lunges at the lead at both ends of the race track.

Egel found a way past Dillon as the 25-lapper moved past the halfway mark, only to clout the wall at Turn 4 soon after.

The #S97 rode up onto the main straight catchfence and his night was over.

In the end it was Dillon who prevailed in a return to form for the driver of the #S81 entry.

“This means so much more to us than just a Preliminary A-Main win,” he said.

“This is great for our confidence and good for me to get a win after a dry spell, especially when you look at the calibre of the guys we beat.

“But the reality is that this is mainly about getting a good points haul for tomorrow night (Night 2) for the main race and we couldn’t be happier.”

Madsen sat fourth for much of the race but moved into second on Lap 18 and that was where he took the chequered flag, ahead of Eliason.

Rusty Hickman was in the thick of the action near the front of the field and ran as high as third position having started from the third row, before finishing fourth.

Those joining Egel on the list of retirements included Dave Murcott, who was first to go when he rode the wall at Turn 3 on Lap 4 and spectacularly cartwheeled #V88, and Brooke Tatnell, who was up to sixth before he cut a tyre on Lap 15.

Tasmanian teen Jock Goodyer had claimed the Revolution Racegear Quicktime in his debut as a World Series contracted driver but failed to make it past the first heat when he collided with Lisa Walker on Lap 2, destroying his chassis.

There will be two more rounds of heats, followed by the Bronze, Silver, and Gold shootouts, and the 35-lap Main Event tonight from 1830 local time.

Next Story NASCAR stars in spectacular rollovers in NZ speedway