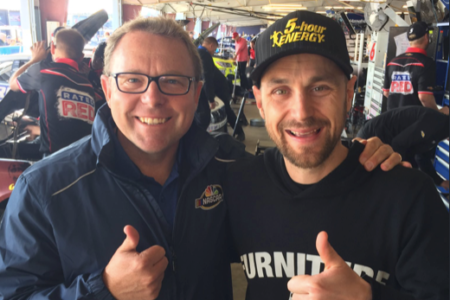 Small took up the lead engineer role for Truex Jnr’s #19 Joe Gibbs Racing entry in 2019 having followed the Cup Series champion across from Furniture Row Racing, which closed at the end of last year.

The Melburnian has been given the call-up due to Cole Pearn’s decision to step back from crew chief duties for Truex Jnr, a position which he had held for five years across Furniture Row Racing and Joe Gibbs Racing.

“This is an incredible opportunity,” said Small.

“Having the confidence of Coach (Joe Gibbs), Martin and everyone at JGR means a lot to me.

“I moved to the United States six years ago to work in NASCAR and I wanted to work my way up to become a crew chief.

“I’m ready for this and I am excited about working with Martin and the foundation we have in place on the 19 team with the group of guys we have.”

Truex Jnr said, “I know James well and feel very comfortable with him.

“I feel like we approach racing very similar. He and Cole (Pearn) have a lot of similarities. It’s a natural fit and I’m really excited about it. I think he’ll do a great job.”

@MartinTruex_Jr shares about his experience with James Small, his new Crew Chief on the No. 19 #Camry headed into the 2020 season. #TeamToyota pic.twitter.com/TYJcrCuvOG

Pearn himself also gave Small a heartfelt endorsement, writing on social media, “@james_small was the unanimous pick and I am so stoked to see one of my best friends get this opportunity and I know he is going to kill it.”

Just FYI @james_small was the unanimous pick and I am so stoked to see one of my best friends get this opportunity and I know he is going to kill it https://t.co/NM1DUgO7H0

Small has already worked as a crew chief when he filled in for two races on Erik Jones’ #77 Furniture Row entry in 2017, during which time Jones finished 10th at Watkins Glen and third at Michigan.

His Supercars experience encompasses stints at Tickford Racing, Kelly Racing, Garry Rogers Motorsport, and Paul Morris Motorsport, winning the Bathurst 1000 as Mark Winterbottom’s engineer at the former in the year before he left for the United States.