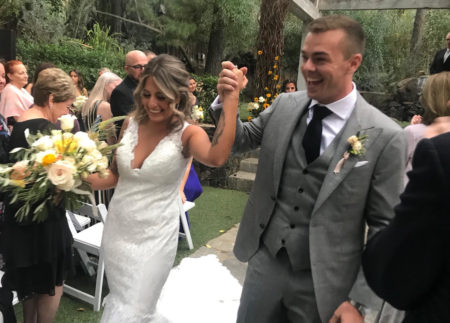 Two-time Supercars champion Scott McLaughlin has capped off the biggest year of his life by marrying American Karly Paone in Malibu, California.

The wedding came on the same day as Team Penske announced the 26 year-old would be involved in an IndyCar test at Sebring in Florida next month.

The guest list included some of the sport’s highest profiles including his current team bosses Dick Johnson and wife Jill, and Ryan Story.

McLaughlin’s regular Supercars crew chief Ben Croke headed a list of team members who had worked on his #17 Mustang in what was a record-breaking 2019 season, which included a win at the Supercheap Auto Bathurst 1000.

“It has been an incredible year and I could not think of a better way to top if off,” McLaughlin told Speedcafe.com.

“I am incredibly fortunate to have Karly in my life and to have so many friends and family here to celebrate our wedding.

“I has been a terrific day.”

McLaughlin and Karly are planning a honeymoon in the US before his IndyCar test on January 13.