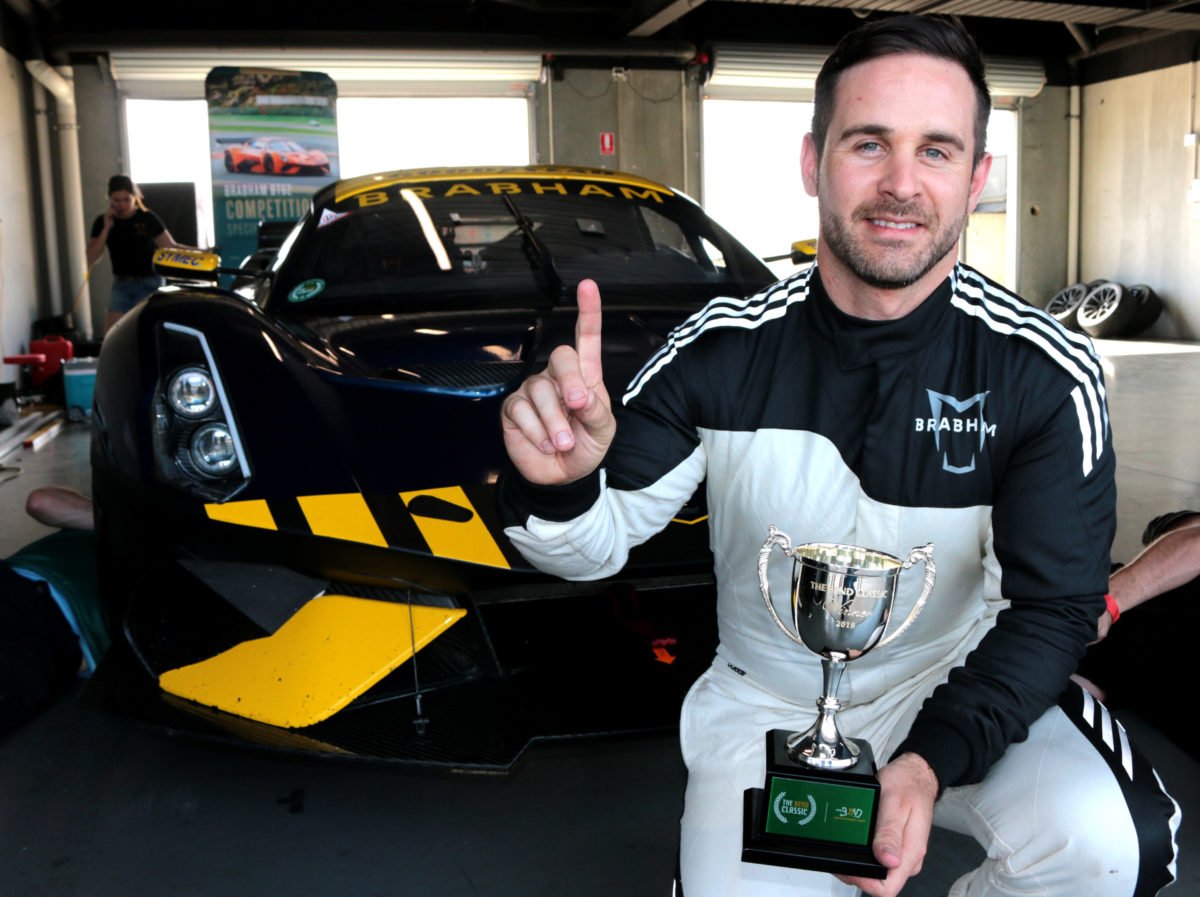 The Brabham BT62 Supercar has claimed its first trophy on home soil after taking victory in the inaugural The Bend Classic at The Bend Motorsport Park.

Supercars driver Ash Walsh guided the V8 powered BT62 to an impressive 1:15.0214s record lap of The Bend’s West Circuit to beat a field of high-performance racing and sports cars in a one-lap dash Shootout.

The silverware comes after the car claimed victory on its full racing debut at the Britcar Into the Night race at Brands Hatch last month.

The Classic Shootout saw the top two cars from each class, based on points scored across three Super Sprint sessions held on each of The Bend’s three circuit layouts, progress to a one-lap dash to determine both the overall and class winners.

Walsh left nothing on the table with his flying lap that topped the end-of-day shootout that determined each category winner this weekend.

“It was really cool to get out there and have a crack without anyone else around,” said Walsh.

“It was the first time that I’ve done a Shootout style lap in the car. The car is just so fast so any lap you get to do in it, really, is pretty fun. It puts a big smile on your face.

“I missed the hairpin a little bit and dropped a bit of time, but it’s a fast car so we made it up and I was really happy with it in the end.

“It’s great to get out here and be involved in the event – the first one at The Bend.

“It’s the first win for the car on Australian soil and it’s great to get the car out in front of everyone and get it amongst people to show what it’s about.

“It’s an impressive bit of machinery and I’m just happy to be part of it and show the car off.”

Brenton Ramsay powered his Birrana Racing Reynard 94D to second overall in the shootout and first in the Open Wheel / F1 class, while Paul Faulkner was just 0.5s behind in third position in his ex-Alan Jones Williams FW07.

Kevin Chapley won the Porsche Cup class in his Porsche 911 GT3 Cup Car thanks to his 1:22.7143s best, which was good enough for fourth overall.

Todd Carruthers was fifth overall and first in the Time Attack Class in his Subaru WRX STi, while Mark Haig was sixth outright and first of the Touring Cars & Sports Sedan runners in his wild Datsun 510.

Ben Holt topped Modified Production and was seventh-quickest in the Shootout, while Alistair Dow’s impressive Puma Clubman suited the West Circuit to perfection; winning his class and finishing ninth in the Shootout.

The inaugural The Bend Classic attracted more than 45 entries in its debut year with competition in each class throughout the weekend.

“We’re very pleased with the first Classic event and we’re confident it has established something that we can build on into the future,” said Michael Rossi, the Bend Motorsport Park Marketing Manager.

“We’d like to extend our thanks to the teams, drivers, entrants, guests and spectators who attended the first event and made it a success. We’re already working on plans for 2020 to make it bigger and better.”

A date for the 2020 The Bend Classic event will be announced in coming weeks.