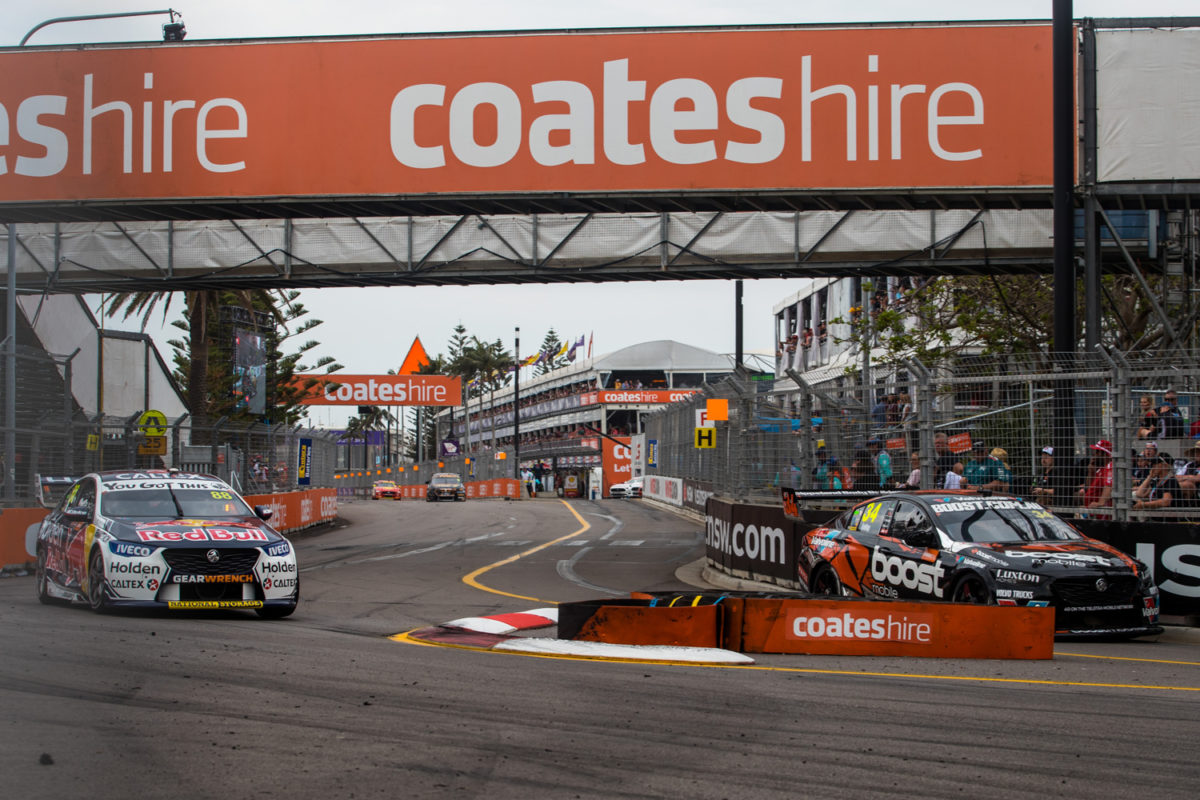 Shane van Gisbergen has called for further changes at Newcastle

Changes to the Newcastle street circuit for this year’s event didn’t net the competitive results hoped for because of the current reliance on aerodynamics according to leading drivers.

The hairpin towards the end of the 2.6km lap had its radius tightened in an effort to create a bigger braking zone and encourage overtaking for this year’s event.

Feedback from drivers was almost universal in that passing remained almost impossible around the tight street circuit.

However, according to Shane van Gisbergen and Scott McLaughlin, changes to the cars next year should see that situation improve.

“It’s just worse in general this year, unfortunately because of the way the cars are,” Shane van Gisbergen responded when asked if overtaking around the Newcastle streets had become easier with the amendments to the hairpin.

“I think next year with a lot less downforce we should see good racing again. I hope.”

According to Scott McLaughlin, the effect of drag compromises the following car, not only in high speed corners but also under brakes.

“The problem is now you can brake so deep in front of someone and they can’t,” the 2019 champion explained.

“You’re struggling to pull it up as it is if you brake where the bloke in front of you does, so if you’re trying to do more you’re just going to lock up.

“But I think, like Shane said, once it changes it will be alright.”

The Holden Commodore and Ford Mustang are this week set to go through the VCAT process to re-homologate them both for next year’s competition.

As part of that a 12 percent reduction in downforce is being targeted.

Though that will help, van Gisbergen is also calling for further changes to the Newcastle venue to improve the racing.

“What they’ve done to the track’s good,” van Gisbergen reasoned.

“They need to do it at Turn 1 as well; straighten that up as well so we’re braking on the right hand side for a left hander and open that up.

“That will just make the track better, but (I’ve) been saying it for a while.

“Hopefully it’s one step at a time that keeps coming.”

Changes at Turn 1, where the circuit turns off Wharf Road onto Watt Street, are possible, though would likely result in work to the traffic furniture and kerbing to the inside of the corner.

Currently the turn is nearly 90 degrees after taking the preceding right hand bend into account, the loss of which would open the corner up to close to 45 degrees.

That would have a knock on to the pit exit road, and likely result in a higher apex speed as the corner itself would be opened up.

Next Story MSR intends to extend T8 alliance into 2020