Sainz would have been ‘really angry’ without podium

Sainz would have been ‘really angry’ without podium 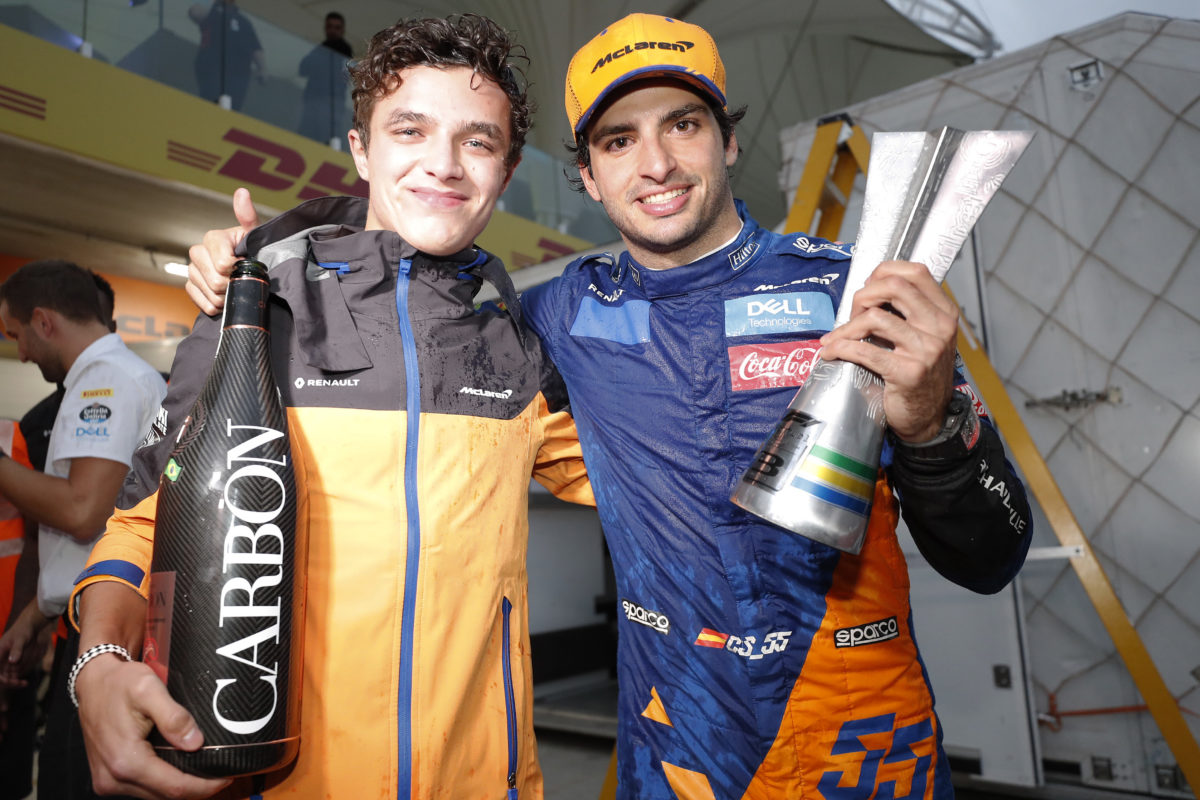 Carlos Sainz with Lando Norris after the Brazilian Grand Prix

Carlos Sainz claims his unexpected podium at the Formula 1 Brazilian Grand Prix felt good despite not appearing on the rostrum.

The McLaren driver was the fourth across the line at Interlagos, but was subsequently promoted to third following a post-race time penalty for Lewis Hamilton.

That came for a penultimate lap tangle with Alex Albon, dropping Hamilton to seventh in the final reckoning and thereby promoting Sainz to his maiden F1 podium.

Speaking ahead of this weekend’s season finale in Abu Dhabi, Sainz admitted that it was “different from what I expected from my first podium but something I will never forget”.

“It was a very, very long wait – at least it felt that way,” said Sainz, who started 101 grands prix before achieving a podium, and ended a drought for McLaren that stretched back to Australia 2014.

“I knew Hamilton got a penalty, I knew the podium was mine. I knew I had respected the yellow flag.

“Of course I want a podium soon that I can do normal, but to get your first podium to actually enjoy it with 60 to 70 people up there singing and having champagne – I like Max and Pierre, but I like my team also, to share a podium with, so I enjoyed it a lot.

“It felt good, I think as good as it can get, because a podium starting last you never expect it.

“Honestly, this year we have been so many times best of the rest that if the only race that something happens at the front I wouldn’t have got the podium, I would’ve been really, really angry.

“So, thank God we got it. It was a great effort by everyone.

“I saw a lot of smiles, a lot of energy, motivation from everyone.

“I think we all agree we now want one on pure merit, that we don’t depend on the top teams (struggling) and we want to keep getting stronger.”

Among those celebrating with Sainz was Lando Norris, despite the having to move aside for his team-mate during the race and finishing just 11th.

That Norris took part in the celebrations was, in Sainz’s opinion, a testament to the rookie.

“I must say Lando behaved like a gentleman the whole day, he put a smile on his face even though I’m sure it was not entirely easy,” the Spaniard reasoned.

He was genuinely happy for the team, happy for me, and it’s something nice to see; true gentleman, even though he looks like a kid!”

The podium moved Sainz to sixth in the drivers’ championship, level on points with Pierre Gasly and 11 clear of Albon.

Excluding the Brazilian GP, where he was tipped around by Hamilton almost within sight of the flag, Albon has averaged 9.7 points per race since joining Red Bull at the Belgian Grand Prix.

Gasly’s tally, meanwhile, has been hugely influenced by his second placed finish in Brazil, his next best a fourth at the British Grand Prix when driving for the senior Red Bull team.

“For me it’s already a success, to be fighting two guys who have been driving for Red Bull, it means this year we have done things properly well, and it gives me the opportunity to try and fight for a position that in the beginning of the year we wouldn’t have really thought about.

Practice for the Formula 1 Abu Dhabi Grand Prix 2000 AEDT on Friday, with Practice 2 following at midnight.