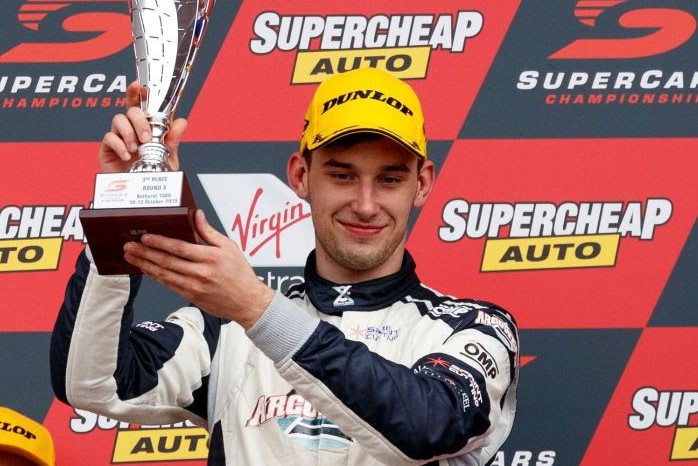 Kurt Kostecki is assessing his options for progression to the Supercars Championship but is willing to settle for a Pirtek Enduro Cup co-driver role in 2020.

Kostecki finished runner-up in this year’s Dunlop Super2 Series with Triple Eight Racing Engineering but has not competed in a Championship event since a wildcard start at The Bend last year, and is yet to participate in the enduros as a driver.

The 21-year-old has identified co-driving as a key goal for next year, with talks to step up now that the 2019 campaign is over.

When asked if he had an update on his plans for 2020, Kostecki told Speedcafe.com, “Not at this stage.

“Obviously there’s a lot of teams that still need to finalise what they’re doing, but obviously we’re working pretty hard to try and find a co-drive somewhere; that’s my biggest goal at the moment.

“(Once the season is over) everyone can sort of sit down and get the co-driver thing going, whereas the main driver stuff was probably done a couple of months ago for next year.”

Kostecki has also been speculated to join Matt Stone Racing’s expanding Virgin Australia Supercars Championship program, where he would share an entry across the season with another driver believed to be in the frame for that seat, Zane Goddard.

The West Australian says that “there’s nothing locked in there at all” but that the MSR seat remains an option.

His overriding consideration, however, is placing himself in a position to enhance his career prospects over the longer term.

“Obviously it’s an option – if the seat’s open, it’s an option – but for me, we want to take the right steps in terms of being able to make it to the main game full-time one day,” he added.

“So, it’ll be just a matter of us working out what’s best in terms of exposure and being able to improve my own skills because, at the end of the day, that’s what it’s about; improving your skill, and then putting the rest together to see what path to take.”

About waiting another year before making the step up to the Supercars Championship, Kostecki added, “If that means I’m improving what I do, then absolutely.

“You don’t really want to make that jump too quickly. As we’ve seen, a lot of guys do and then you just get tagged with this label and it’s hard to came back from it.”

Kostecki also indicated that in the event he does sign on as an enduro co-driver, he would likely continue in Super2, in which he first appeared in 2014 as a 16-year-old.

“For most teams, the criteria is to complete some races in Super2 an obviously it’s great for this category, we’ve been pretty loyal to Super2 over the last few years, so it’d be a shame to see it go down (numbers drop further),” he said.

Jake Kostecki, Kurt’s brother and colleague at Kostecki Brothers Racing where the latter continued to work despite switching teams on the track, is of a similar mindset.

He and their cousin Brodie Kostecki contested all three of this year’s Pirtek Enduro Cup events in KBR’s wildcard entry, although he is open to linking up with other teams if he stays in Super2.

“I reckon that would be a good step for me.

“I’ve learned a lot doing it. Obviously not going straight into the Supercars, I feel like being a co-driver first, you learn a lot so I’m looking to find a co-drive for next year.

“I’m wanting to do Super2 again; it just depends in what car I’m going to be doing it in. I’m talking to a couple of guys at the moment so just seeing how we go so far.”

The younger Kostecki brother enjoyed something of a breakout Super2 season in 2019, highlighted by a maiden pole position in Townsville, and starred in the Sandown 500 when he ran in the top four for the 27 laps until his first pit stop.

“I started seventh in the race and I gave the car back to Brodie in (seventh) after 60 laps, so it was pretty confidence-building,” he said of Sandown.

“Obviously there were a lot of good co-drivers there as well but I pretty much raced them guys in Super2 as well and I battled pretty hard with them.

“It was pretty good and just to do it on the big stage, with more people watching; it was a good feeling.”

After a crash in the Supercheap Auto Bathurst 1000, Jake and Brodie Kostecki finished 18th, 16th, and 16th in the long-distance races this year.