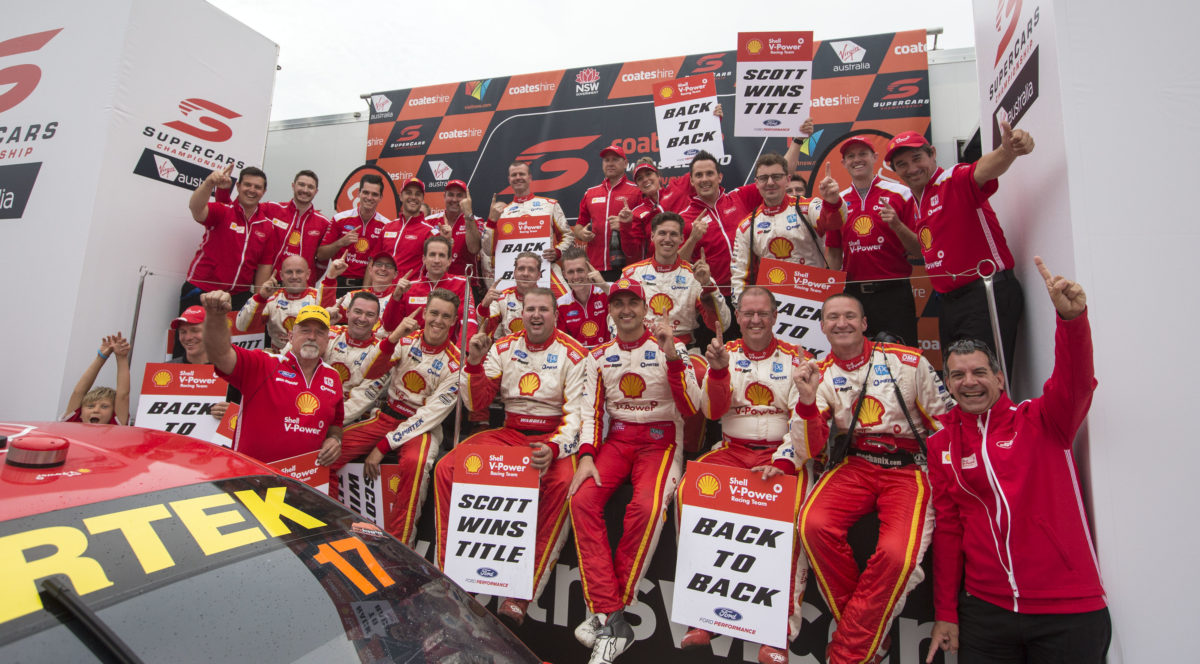 Shell V-Power Racing has a better resolve after coming through ‘adversity’ on the way to securing the coveted Supercars teams’ title, according to managing director Ryan Story.

The Ford squad lifted its second teams’ crown in three years at the Coates Hire Newcastle 500 after overcoming a spirited challenge from Triple Eight in the second half of the season.

Heading into the weekend the team had a 116 point advantage over the factory Holden squad that had taken victory in every race since Scott McLaughlin’s win at the Supercheap Auto Bathurst 1000.

While Triple Eight extended that streak with a pair of wins at Newcastle, podiums for McLaughlin and Coulthard in Race 31 followed by a fourth and second respectively on Sunday was enough to secure the teams’ championship.

DJR Team Penske has clearly been the most successful team this season having recorded 20 wins from the 32 races.

The success has arrived amid controversies that began with the team’s success triggering a parity debate that resulted in Supercars making five aero package adjustments across the models.

It was then found guilty of two rule breaches at the Bathurst 1000 that saw the team lose 420 teams’ points, while McLaughlin was stripped of pole and excluded from qualifying due to his car being in breach of engine regulations.

Reflecting on the year, Story believes his team has come through the challenges presented on and off the track all the stronger.

“It’s been a very challenging year, but to come away with the drivers’ championship… behind every great driver in Scott McLaughlin, and he is a truly great driver, is a great team, and the team’s championship is a reflection of the job the team has done throughout the course of the season,” Story told Speedcafe.com.

“It means an awful lot to us.

“It probably hasn’t quite sunk in yet with what we’ve managed to accomplish through the course of the year.

“But it’s very hard for me right now at least not to reflect on some of the things that are happening within our world (the ongoing bushfire crisis), and what we can do about it.

“We’ve fought through some adversity and some challenges, I think we’ve come out of it stronger and I think that our people have got more resolve than ever before to do what we need to do, to be successful, to stay together and stick together as a team.

“My job is to protect the team from some of those external factors, I’ve done the best I could to do that and like I said I’d take responsibility for anything that’s happened with us as a team.

“All of the good things that have happened this year are as a direct consequence of the work that so many people have put in, through our partners, through Ford Performance, through the race team, and some of the things that we need to reflect upon that haven’t necessarily resulted in the best outlook, I have to take full responsibility for.”

While the Bathurst 1000 penalty fallout reignited among the paddock at Newcastle, Story says he made sure the negativity didn’t affect his team as they went in pursuit of the championship.

“I take responsibility for everything that’s taken place,”  Story added.

“That’s the role of any good leader of any organisation – and the key is to insulate the team so that they can focus on the task at hand, and not let it become a distraction, and I think we proved that this weekend.

“Mechanics through to engineers, they focused on the job at hand and they got it done.”

The Ford homologation team will now focus on readying its Mustang for Supercars’ 2020 VCAT process next month.