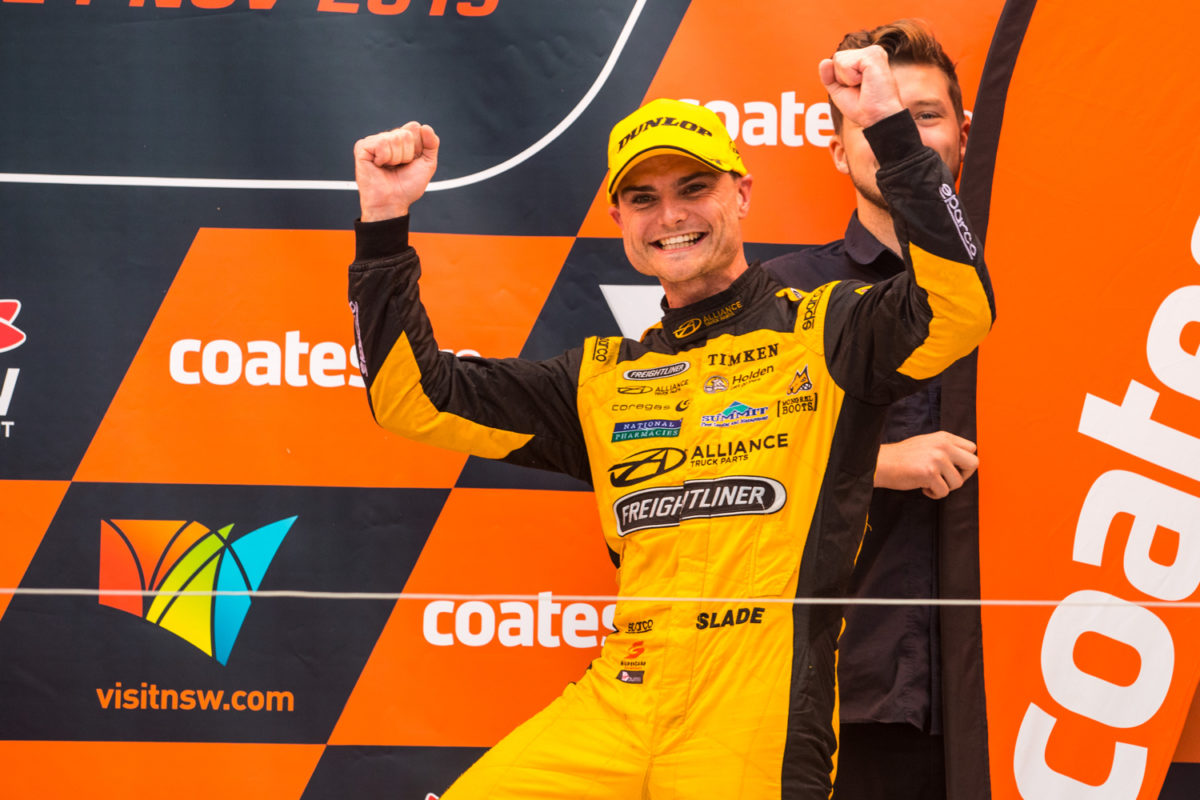 Tim Slade has confirmed that today’s Supercars Championship race in Newcastle was his last for Brad Jones Racing, meaning he signed off from the Albury team with a podium.

Slade had maintained that his future beyond the now just passed Supercars season was uncertain and there is still no firm word on where he actually will drive next year.

However, he has now stated that it will not be BJR while as previously revealed Todd Hazelwood is tipped to take over the seat.

“I won’t be at Brad’s, so currently unemployed, planning on taking Thursday Brewing (his craft brewing business) to new heights.

“We’re going to crack the international scene and just dominate the beer market, pretty much!”

Slade also described 2019 as the hardest period of his career, having driven a car that did not ‘make sense’ up until engineer Tony Woodward made a discovery between Pukekohe and the Supercheap Auto Bathurst 1000.

The 31-year-old finished the season 15th, having been as high as fifth in the standings when he finished in the top 10 six times in the first seven races of the season.

From Bathurst onwards, Slade qualified in the top 10 four times out of six (including the Sandown 500 as a whole) and got top 10 finishes on both days in Newcastle.

“I guess, pre-Bathurst it’s been a very, very frustrating last 12 months, just in the sense that nothing’s really made sense, with the exception of maybe one or two weekends; the Grand Prix and maybe the one after where the car was decent.

“My engineer, Tony, went through the cars from head to toe after New Zealand, found something, and then I don’t think it’s any coincidence that after he’s found something and then put it to where it should be to match the other car in the team and from then on – I’m not just saying it, you can look at the results – that we’ve been competitive within our team ever since.

“It’s probably been the hardest period in my career.

“I thought it’s been hard previously when you have one or two weekends that have been tough and nothing makes sense, but when you have that long run where you look at the data and it’s like ‘Well, it’s doesn’t feel achievable weekend after weekend after weekend,’ and then all of a sudden it does, and then you get some good results and you can be competitive with your team-mate again…”

Slade nevertheless has fond memories of his four seasons at BJR, with his two Supercars Championship race wins to date coming on one weekend at Winton in 2016.

“It’s been frustrating, but on the other hand, I have my best memories with BJR.

“I have a really, really good relationship with Brad (Jones). He’s an awesome person and I think we’re both pretty similar people, and I got my first wins with Brad. There’s an awesome team of guys and girls there.”

Jones was also pleased to see Slade crack a third placing in his final outing for the team, telling Speedcafe.com, “I think that he’s done an amazing job today; I couldn’t ask for any more.

“Being on the podium in the last race of this year gives the whole team momentum going into the break and a really, really cool way to finish off.”

Slade also hinted that he could be involved in more GT racing next year.

The South Australian linked with HubAuto Corsa in 2018 and won the Intercontinental GT Challenge’s California 8 Hours at Laguna Seca with the Asian-based outfit this year.

When asked by Speedcafe.com if GT racing was possibly a new career path, Slade said, “I think so.

“At this stage, nothing’s locked in but, for sure, I’ve been lucky enough to have the opportunity to do some of that stuff, so it’s definitely something that’s being considered.

“For sure, I guess that could potentially be on the cards.”

BJR will become a full-time four-car operation next year, with Nick Percat and Macauley Jones staying on, the latter in the Tim Blanchard Racing entry, while Jack Smith joins with a Racing Entitlements Contract which his family has acquired.

Hazelwood is expected to take the final seat vacated by Slade.