Tom Alexander has won the 2019 ECB SuperUtes series while Craig Woods was victorious in a penultimate race of the season which was marred by a heavy crash that took out the four leading cars.

Ryal Harris (Mazda BT50), Craig Thompson (Toyota Hilux), and Ben Walsh (Toyota Hilux) were all caught up in an incident at Turn 1 on Lap 2 after then-leader Elliot Barbour (Mitsubishi Triton) found the tyre wall on his own and left those behind with nowhere to go.

Barbour had just taken over the lead from reverse grid pole-sitter Thompson on the main straight at the end of the opening lap but over-shot the first corner and ended up in the tyre wall.

His car then bounced back onto the racing line in front of the pack.

Harris was first on the scene and made contact with the rear of Barbour, before Thompson drilled into the side of the Triton. 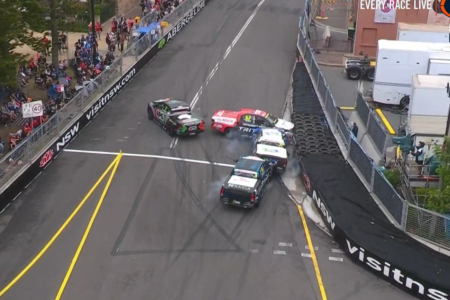 An above view on the incident pic: Fox Sports

Walsh also didn’t have a chance to react to the incident and speared into the back of Thompson.

While Harris managed to limp his Mazda BT50 back to the pits, Barbour, Thompson, and Walsh all needed recovering under a lengthy Safety Car period.

Christopher Formosa (Ford Ranger) led the field back to the green flag on Lap 5 but was immediately shuffled through the pack as Woods (Toyota Hilux) went to the lead at the top of Watt Street.

Alexander (Isuzu D-MAX) battled his way from fourth after the crash to second and challenged the race leader in the closing stages.

Despite the pressure, Woods claimed victory by less than a second ahead of Alexander and Cameron Crick (Mitsubishi Triton), the race shortened by a lap due to the Lap 2 crash.

Alexander now holds an unassailable lead in the series standings with one race remaining.

The SuperUtes season wraps up with Race 3 of the weekend at 1415 AEDT.